An update on the Booth.  I haven't talked about the Booth lately.  It does alright.  I wish it did more, and I think I could sell more if I had room to put some bigger pieces or a chair or a piece of furniture.  Right now, I have tons of smalls.  ﻿I always make rent and commission and get a check. My biggest check has been $125.00 after expenses. For me, that's enough to keep it going and have fun with it. It's a good way to sell things that aren't worth selling on ebay because they either aren't worth enough money to make it worth my while or they are too heavy or fragile or something like that. 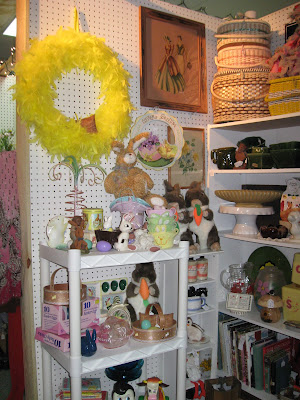 Last week, I went in and pulled a bunch of stuff that had just been sitting there and put out a bunch of new stuff.  Well, new old stuff.  I made an Easter area and I have a lot more to take in when I figure out how to squeeeeze it in.  That big feathery wreath is fantabulous. 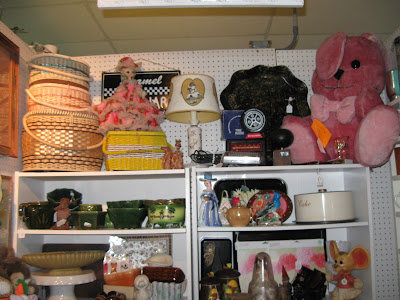 That pink bunny is a 1970's Pepto Bismol Advertising Bunny.  But, I fugured he might have a chance at selling at Easter.  I had a ton of pottery at one time and it has all sold except for the green.  An now that I only have green, it has started selling too.  I sell about three or four pieces a month.  So, if I find pottery that isn't quite what I collect, I stick it in the booth.  Someone must have been looking at that Cake carrier because I see it is crooked.  They should have bought it - it's cool! 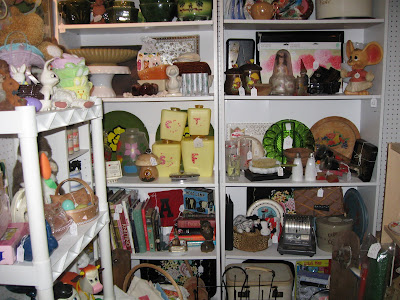 I think there is a set of those old plastic canisters in almost every booth in the flea market!  Mine are priced low enough, maybe they will be just right for someone's kitchen someday.  I have a shelf full of books - my library takes donates and resells them for 25¢-50¢ each.  I buy all the ones that are recently released and sell them for $5.00 each.  I have sold multiple copies of all those "The Girl With the..." Books. 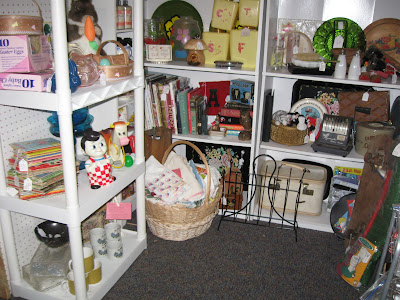 The basket if full of vintage linens.  It is always a mess when I go in - linens strewn about everywhere.  But, at least people are looking and I have sold a good amount of linen towels and tablecloths.  And, if you are looking, you DO see a Piddle, Putt & Poop Golf Set.  I cannot believe I have that in my booth!  MUST SELL! 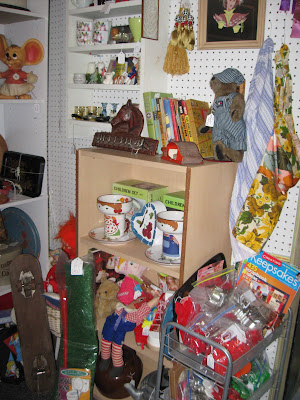 That metal rack came from the thrift last week for $3.00.  I put all my baggies of cookie cutters and scrapbooking scissors in it.  It's a little messy looking, but people seem to love to dig in bins and baskets.  (I do too...)  Note the "manly" shelf with old Boy Scout Books, a horsehead tie rack and an old cigarette roller.  ha. 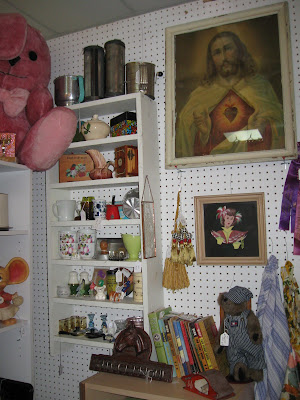 That big old religious print is really awesome.  I have a fat price on it, but I htink just the right person will HAVE to have it someday.  I keep all the small stuff (really small stuff) on the hanging white shelf.  it was a happy day when I decided to try and hang that on the wall - before I had it sitting on the floor.  I sell a lot of miniature china animals, so I always pick them up.
***Speaking of Flea Markets, if you haven't purchased Flea Market Style yet this year, I found a good deal on it. I do like the magazine, but I usually pay $3-5 per YEAR for Martha Stewart, O, Better Homes, Fresh Home, Ready Made, etc., so paying $9.99 for ONE issue is hard for me to do. Very hard. I decided to treat myself with the latest copy last week when I spotted it at Sam's Club. I was pleasantly surprised when it scanned at only $6.88. That's $3.00 less and I do love a bargain!  Don't YOU?
Posted by Shara at 10:39 PM