Throw Me Something, Mistah!

During the long winter, with not much fun stuff to do, we anxiously look forward to two events - The Kite Festival and Mardi Gras.  These event both normally fall in March, but this is the first year that they were both on the same day.  It was a had decision, but in the end we chose......

Mardi Gras.  Mardi Gras is without a doubt, my absolute favorite day of the year.  It is so much fun.  Everyone is in a good mood.  There is laughter and happiness and joy and it makes my heart happy for a few hours. 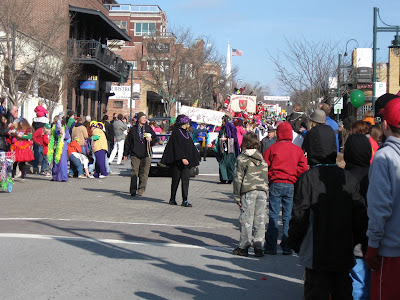 I always take my camera to take photos of the parade, the excitement, the people and the fun. 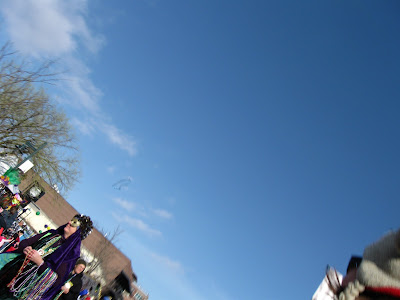 But, then they start throwing those damn beads and my plans go straight down the toliet.  Yesterday The Breadman went with us for the first time.  He managed to catch the first string of beads and he handed it to me like he didn't want it.  The Bean pushed it back at him and said, "Keep it.  For the next hour, nothing else is more importnat in the whole world than getting those beads!"  And, he is right.  Those beads are very important!  For that hour, anyway. 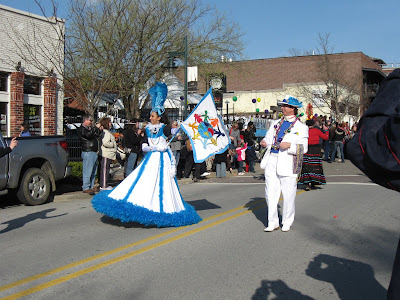 There was a lull in the bead throwing, so I managed to snap this photo of the parade coming down the street.
Then the beads started flying again and I was obsessed with catching them.  (A side note - do you see the shadows on the street of the people?  They stood next to me and made out the entire time they waited for the parade.  Is that really necessary?  I mean, I don't mind a peck on the cheek or a sweet smooch.  But, open mouthed noisy slobbery kisses coupled with butt rubbing?????  I think not.) 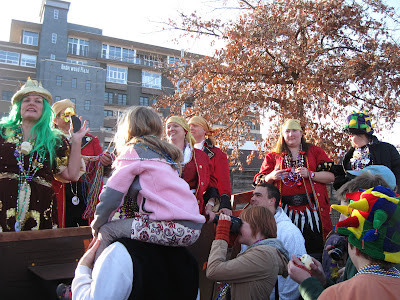 After the parade the floats park in the parking lot and they play Zydeco music and everyone dances.  The people on the floats continue to throw more beads and trinkets.  Then, when the whole thing is alomost over, they start tearing down the floats and they throw almost everything out to the crowd.  You ought to hear the crowds SCREAM when they hold up a poster or a prop.  It is so funny to hear people scream out "FLAG! FLAG! FLAG!" like getting that flag is the most important thing they will ever ask for in their entire lives.  Last year they threw a sandwich to the crowd and people were about to have a heart attack screaming for that sandwich. 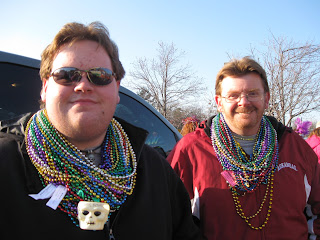 In the end, we caught a slew of beads.  I caught 40 (including a much covereted one with beads as big as golf balls), The Breadman caught 45 and The Bean caught 57, plus two T-shirts and a fancy tricorn pirate hat thrown out by the captain of the pirate ship.  I saw the Captain throw his hat out into the crowd and I watched it bounce off hands, heads and fingertips as it made it's way across the crowd.  I finally saw one had grab the brim.  When I looked to see who had it - The Bean was grinning ear to ear.  I don't know how he managed to grab it when all those giant college boys were leaping in the air after it.  But, then again, he is as tall as most of those boys.  :(
Now that we are home, I don't know what do do with those silly beads.  They were vitally important at the parade.  Now?  Not so much.
Have you had any Mardi Gras fun??????
*I would LOVE to go to the real Mardi Gras someday.  I know our little small town parade would be nothing in comparison. But, until then, it will have to do.
Posted by Shara at 10:20 PM