Today I heard my name being called....Shara......Shara....come to the Salvation Army.......  So, what could I do?  I went to the Salvation Army.  I had packages to deliver to the Post Office, books to donate at the Library and donations to take to a thrift, so why not donate to the SA?  (Although I hate donating there, no one helps you or thanks you, but as soon as you walk away they are on it like a pack of dogs rooting through it.  I do not care for the people that they have accepting donations, so they keeps me from donating there very often).
But, I digress.  When I hear my name being called to a certain thrift, I know I must go.  So, I went. 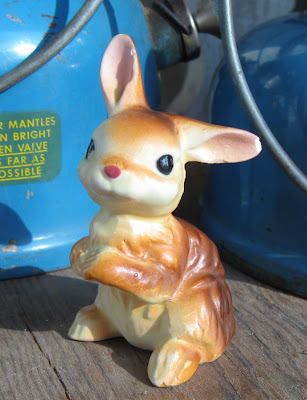 I walked that store all around three times, but all I could find was this sweet tiny JAPAN bunny for 50¢.  Surely I did not just use $5.00 worth of gas to buy a 50¢ bunny??????
So, I walked the store one more time.  I took a second look into the locked "Vintage" cabinet.  I rarely look there because everything is so ding dang expensive.  Like a 1960's Barbie for $74.50 and a beat up tin for $15.00.  But, becasue I was still hearing my name, I went to look again.
And, then I saw something that was completely not my usual sort of find.  But, something I had just read about earlier in the month on this blog. 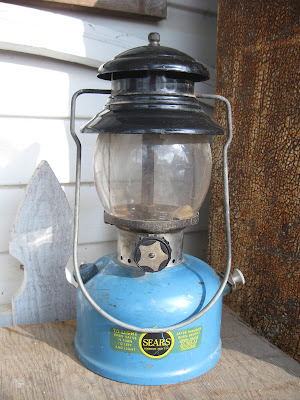 This!
I was pretty sure it was like the one on the blog, but just in case I pulled out my cellphone and pretended to be texting, but I was really on ebay looking up the lantern.  I found one that had sold for $138.00, so I announced to The Bean I was buying it. 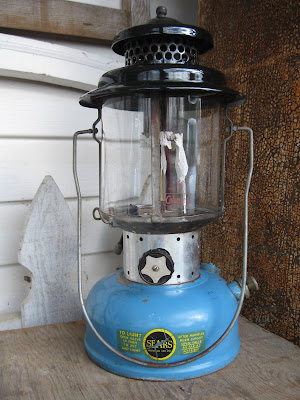 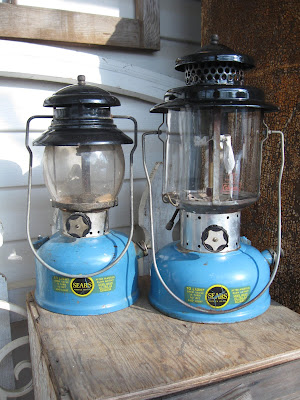 "Which..........one?" he said as he motioned in the cabinet and I realized that there were TWO of the lanterns in there!  Paydirt!
There was a little sign in front of one that said "Lantern $29.50", but just today it was dated and reduced to $15.00.  I decided $30.00 for both of them was a great deal and a sure fire money maker, so I was going to get them.  I went to get the clerk to open the cabinet so I could get them.  She grabbed the little sign that went with it and carried it all to the register.  But, even though there was a $15.00 sticker on each lantern, she only charged me $15.00 total.  "It's for the set," she said.  Who am I to argue?  What a deal!
My stepfather is lantern crazy.  He loves lanterns and oil lamps.  He knows them frontwards and backwards.  I, on the other hand, am afraid that it will blow up the house if I attempt to light it.  So, I am going to ask him to help me make sure they are in good working order so I can sell them.  He cannot talk me out of them!  A good daughter would give them to him.  But a smart daughter will sell them for $$$.  :)
Wish me luck!
Posted by Shara at 10:14 PM