It's been a very busy weekend - and we still have big plans today.

Saturday morning I made a mad dash to the Super Cheap Thrift before the days activities began.  I hadn't been in awhile and there was a blurb in our little local paper saying that they had LOTS and LOTS of Christmas merchandise.  The Super Cheap Thrift is located across the street from the Civil War Battlefield and this weekend is the 148th Anniversary of the Battle of Prairie Grove.  Somehow, I didn't equate the crowds at the Battlefield going to the thrift store too, but boy howdy - it was PACKED.  I found a few things and waited 25 minutes in line.  I would think, "I am leaving.  Nothing in my bag is great enough for this."  And then the line would move.  So, I waited it out.

On the way to the SCT, I passed a big horse trailer by the road with a ton of tables and a sign that said ESTATE SALE.  I was in the mindset that I wanted to go to the thrift, so I drove by, thinking I would stop on the way back.  When I finally did make it back, the tables were about empty.  I thought it was over, but the guy waved me in.  When I got out of the car - you won't believe what he said!  "Welcome, Young Lady (that's not the unbelieveable part, thankyouverymuch)."  He said, "Grab a box - everything is FREE."  Crap.  I was short on time and didn't have time to dig like I like to do.  What I did grab and bring home makes me physically sick that I didn't stop there first.  Not that it was Free earlier, but that there must have been some really good stuff there.  My free stuff rocks.  (Photos tomorrow, don't freak.) 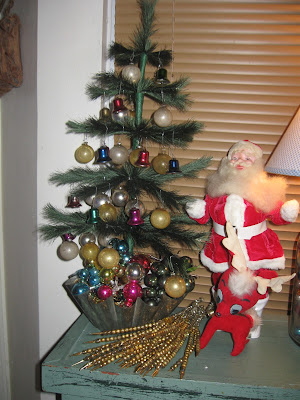 In the midst of it all, the Christmas is going up!
After that, I ran home to pick up The Bean and we headed off to our cultural day at the Theater.  We saw "A Christmas Carol" and it was fantastic.  We sat in the balcony - which is where we always sit - but this time we were on the very front row.  The view was excellent, but the seats were wedged in there like sardines.  I have short legs and little feet and I could barely squeeze in there.  The Bean looked like he was in pain the entire time.  I was thankful my 6 foot tall step father didn't come this time.  He never could have done it.  Anyway, despite the leg cramps, the play was excellent.
After the play, we stopped at Walmart, which I SO DO NOT DO ON THE WEEKENDS.  And especially in DECEMBER.  Holy guacamole, what a crowd!  We attempted to check out in the Garden Center, but this time of year, everyone does that little trick.  I stopped for a head of lettuce and spent $70.00.  Whoops. 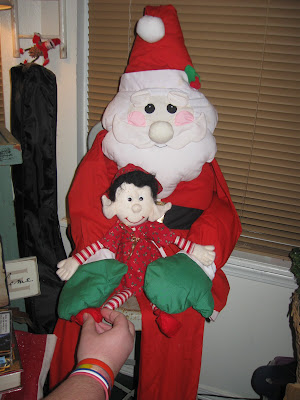 Back home to pick up The Breadman and go to our third Christmas parade of the season.  This was our little local parade, but it is one of the best, actually.  All The Bean's friends are in the parade with the band and different school groups.  Last year, I nearly suffered a concussion when the entire dance team spotted The Bean on the curb and pelted us with Blow Pops.  It was very cold, but a local business stopped and gave us big cups of hot chocolate to warm us up.
Today we are going to the Battlefield to see the Renactment.  I hear it is quite loud and exciting.  I plan to take lots of photos when we tour the camp.  It should be interesting.  And loud!
Tomorrow I plan on taking a nap.  No, I have to decorate.  And put up the tree.  And take photos of my FREE stuff.  I forgot!
Hope you are having a busy and fun weekend too!
﻿
Posted by Shara at 10:30 AM