Babies, Thrift Scores and A Negative 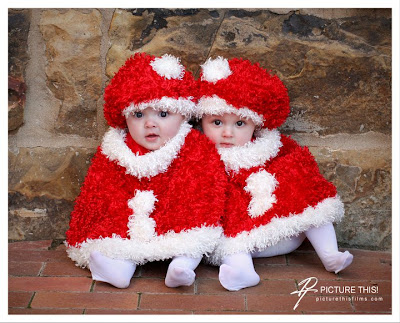 Yesterday, I spent the day with these two precious baby girls.  The "little girl" I used to babysit, had these delightful twin girls in May and they are now 6 months old.  I could not rest until I got my hands on those babies.  And, they did not disappoint.  That's Kennedy on the left - she is strong..  She wants to stand up on your legs, must have something in her hands at all times and desires to eat your necklace, earrings, buttons and fingers because they look simply delicious. I brought them a book with babies in it and she grabbed the book, forced it to her face and had a baby make out session with the baby in the book.  She was a real go getter and cracked me up.  On the other spectrum, is Maci, on the left.  She is calm and mellow.  She sits quietly and watches everything, drinking it all in.  She watches Kennedy with much fascination like, "Holy cow, Sis, chill!"  She was content to sit on my lap, or lay on the couch and just absorb her surroundings.  When they got in their walkers to play, Maci played quietly with one toy while Kennedy hopped and jumped and hollered and spun around in circles.  When she finally got her self adjusted to be able to see her sister, she found her to be quite comical.  She laughed great big resounding belly laughs at her for the longest time.  Too which Maci just looked at her like, "What?"  I think Maci is in for a big job in her life - keeping an eye on Kennedy and keeping her out of mischief and trouble.  Maci is the logical thinker.  Kennedy is the partier.  My "little girl" is in for quite a ride with these two!
After we left the babies, we proceeded to Krispy Kreme for our annual Donut fix.  Delish!  Then on to a favorite thrift store that is about 30 miles away, so I rarely ever get to go there.  It is usually chock full of vintage goodness and run by elderly women.  The way thrifts were meant to be, I say!  I had hopes of finding a tall Santa Blowmold for my porch.  I'm wanting about a four foot tall one, and I can sense there is one out there - I just need to find it.  Any hopes of finding one at this particular thrift were squashed when I saw the house next door.  I kid you not, they must have had two hundred blowmolds in their yard.  I didn't not get any photos of it because the people were in the yard puting out even more decorations!  I believe they are the official Blow Mold buyers of that thrift. 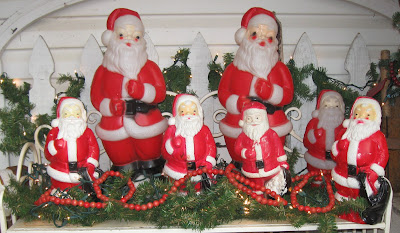 Having said, that - I actually did get two Santa Blowmolds, but they are of the tabletop variety like the ones I already have on my porch.  More is better, I always say!
I also found these two Dansk teak Mid Century Peppermills for $1.50 each. 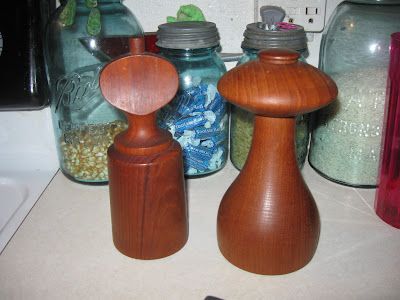 They will be going on ebay tonight and should be pretty well.  They were a happy accidental find.
Lat night I received my very first negative on ebay - an unjustified negative.  I knew it was a bad transaction from the start.  She bought a $3.00 magazine on October 20th. but did not pay until October 25th.  I mailed it the next day on the 26th.  On the 27th, she filed a complaint with ebay saying that "I have been waiting forever for this magazine".  Ebay said it was too early to file a complaint, so I should contact her.  I did, told her that it had been mailed Priority and should be there in the next day or so.  I asked that she contact me if it didn't arrive by that time.  I never heard back, so I foolishly assumed that it had arrived.  Two months have now passed, not a word from her and BAM she leaves me a Negative..."Took forever to receive item".  I seriously think she has my auction confused with another auction.  I have sold items worth hundreds of dollars without a hitch.  But, this $3.00 auction really sucked.  I only charged Media Rate, then discovered that it didn't qualify, so I upped it to Priority (at my cost - it was my fault).  So, I lost $3.25 for shipping, lost ebay fees, lost PayPal fees and got a Negative.  Sheesh.  What a deal!
But, even that cannot take away from the day with those babies!!! 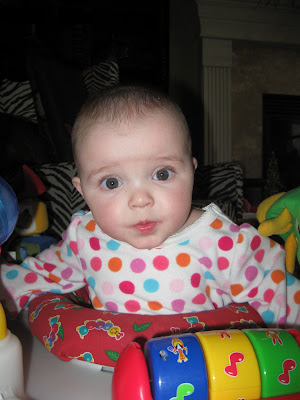 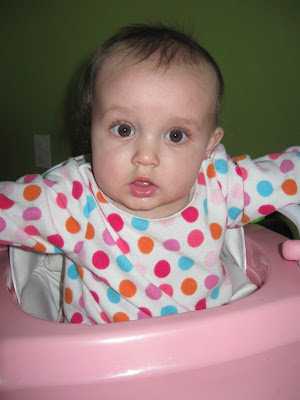 Maci:  Future Valedictorian
(If anyone knows how I can get myself a couple of these babies, please let me know!)
Posted by Shara at 12:15 PM