*Don't worry, it's not as bad as you might imagine.
My Grandmother was a photographer.  Have I mentioned that?  She had a studio in Kansas.  She did all of the portraits for the Governor, House and Senate that now hang in the Capitol Building.  She photographed dignitaries, Miss America contestants and even the Phelps family, who she swears were very nice people.  But, we won't go into that here.
When she had her studio, she was still shooting actual film.  She never actually knew if a photo had turned out the way she wanted it, so she had to take several of each shot to make sure she was getting a good one.  She didn't want to overwork her clients when she wanted to try something new, so she often brought in family to try out new angles, props, lighting, etc.
Guess who she liked to use the most?  Prepare yourself. 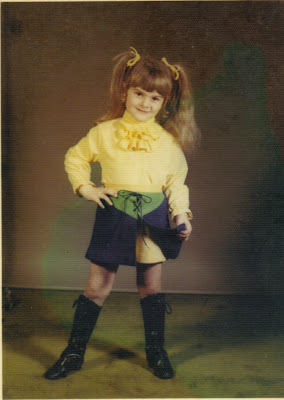 Oh, Lord.  This is me at age three, being photographed in my Grandmother's Portrait Studio.  She would put me in front of the camera and take hundreds of photos of me......for hours at a time.  Many changes of clothing, different hairstyles, props, etc.  It was fun.  For about ten minutes.  I have hundreds and hundreds of professional photos of myself taken from birth through High School.   As I got older, and less cute (and less willing to pull on my go-go boots and culots), the picture taking became less often.  Now that I am *ahem* old, there are very few photos of me.  I had a lifetime of photography sessions crammed into a few years.
~~~~~~~~~~~~~~~
Thanks for all the mixer love.  I still can't believe I finally own my very own KitchenAid Mixer!  And, for only $18.00!  As suggested, I gave her a name!  Her name is Betty.  She is a white mixer, so Betty White came to mind and Betty Crocker for baking. Also, my Aunt Betty that loved to have family gatherings and make her famous potato salad .  So  I haven't used Betty for a whole project yet, but plan too soon.
Thanks also to my wonderful friends for wanting to drive to the SCT and kick some cranky lady booty.  It's just her.  I still love the SCT.  I was there Saturday and everything was fine.  The vintage Christmas was out in full force and I scored a few goodies without any headaches at all.  Yea!
Posted by Shara at 10:14 PM