The Best Sale Ever!

I've already talked about it - but I wanted to tell the story of this awesome sale and what I have learned since. 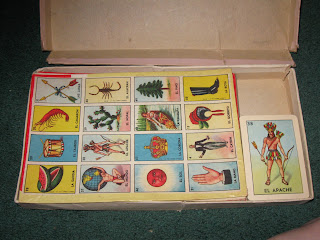 On Friday we were headed to the Swap Meet to do a little junkin'. We stopped at the Convenience Store for a drink, snack and a lottery ticket (hey, why not?), but when we tried to leave the parking lot, the intersection was blocked. I hate traffic and congestion and just sitting in it, so I went the other way down a side street. As we circled around to get back towards the Swap Meet, I passed a yard sale. A BIG yard sale. Hundreds of boxes of overflowing boxes lined up on the ground and on tables. You couldn't see a thing, and those are my kind of sales. Treasures lurk in boxes! 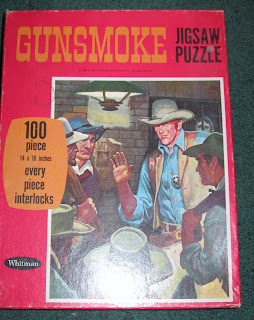 ﻿I whipped around and went back, apologizing to the family and promising them it would be a "quick stop". Two hours later we left. Ha. It was the biggest sale of all vintage items I have ever seen. As I looked around, the people kept walking out of the house with even more and more boxes and individual items. I started making conversation and learned that the house had been sitting since 1993, untouched and completely packed to the brim, almost like a hoarders house. The people had bought the house for unpaid taxes only, sight unseen. When they opened the door - oh boy, they were shocked. So, they were just dragging it out into the yard and selling it. 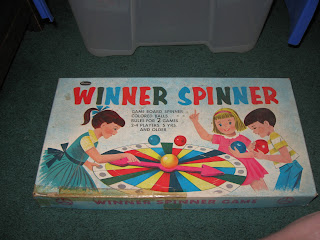 Nothing was priced, but they assured me that it would be cheap. Well, my idea of cheap and their idea of cheap might be different things...so I started feeling them out on a few things. After they quoted me a price of $1.00 for an Apple Box full of loose vintage indented Poland Christmas Ornaments and $1.00 for the contents of the teen daughter's 1970's dresser drawers (old stickers, notebooks, greeting cards, postcards,souvenirs, etc.), I knew it was, indeed, cheap. 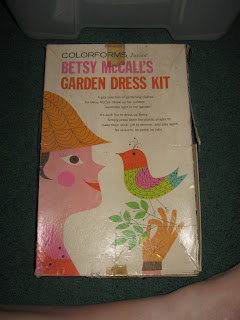 I worked my way down the line, going through box by box picking out what I wanted. Lots of vintage items in their original unopened packages. Since bringing home Friday's load, (Yes, I went back on Saturday), I have done my detective work by going through the items I brought home and discovered that the family owned a store in the 1960's in a local Shopping Center. There was a Ben Franklin next door, and they seemed to buy a lot of stuff there too. I imagine the kids went shopping there if they spent much time at the department store with their parents. 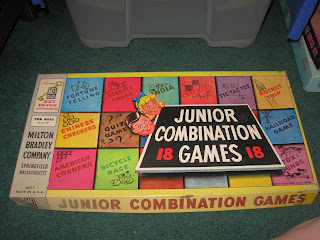 I came across tons of old games from the 1950's - Katie Carrot and Willy Burger (Mr. Potato Head's Friends) metal Chinese Checker games, five old BINGO games, ten vintage Old Maid games still in the box, etc. The lady quoted me a price of $2.00 a game, so I chose 10, but in the end, the husband (who I thought was a dealer when I first saw him), ended up selling me my whole pile of seven boxes for $20.00 total. I added on a Giant Cootie Game, a child's suitcase and a child's magic hat for another $3.00. 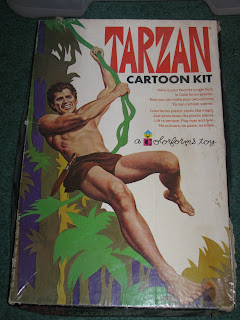 I could not sleep on Friday night thinking about all that stuff. So, I went back on Saturday. I was there another two hours. The funny thing is, I was the only one there for the two hours except for about four people that stopped and left. They just looked at the stuff and left - one lady bought a 25¢ package of Construction Paper and one man bought the washer for scrap metal. It just wasn't the right sort of thing for most people. But, it was right up my alley! 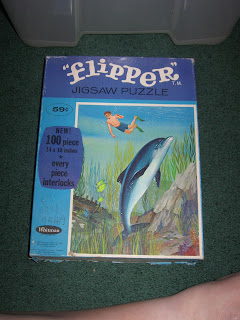 I ended up spending $30.00 Saturday (the wife priced it that time, and she was a little higher). As I started loading, she asked if I wanted to go inside because there as still a lot in there. Oh my God. I did go in and I got one more box for $2.00, but by that time, I was in junk overload, hot, dirty and wasn't sure if I could get it all in my car anyway. 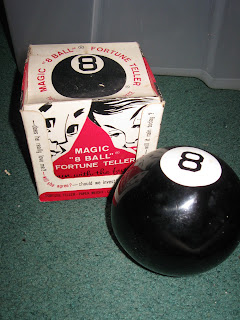 I did find out that the wife had gone to a Nursing Home in the early 1990's the husband died shortly thereafter and it went to the daughter. She didn't want to clean it out so soon, so she was waiting a bit, but was killed in a car wreck. So, it went to her husband, who had no interest or desire to do it, so it just sat there all those years. As I sorted through things, I began to come across names, and birthdates of the people that lived in the house.  Then I started finding packaging and labels addressed to a Jewelry and Watch Repair store in town.  After that I found some photos of the people too.  I asked the Breadman if he had ever heard of Rochier's Jewelry Store.  He said, "That's where my parents bought their Wedding Set.  We used to go in thee all the time."  So, I handed him the photos and he showed me Mr. Rochier.  He said, "I think we even went to their house once...they lived on....." (Uh, duh, we had just been at their house digging in all their stuff so I knew where they lived already, but the light bulb that went off over his head was pretty funny to see as he put 2+2+2 together). 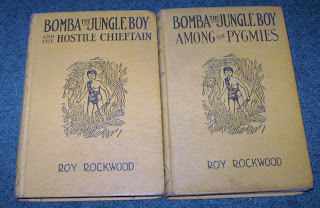 It was sad going through things, because they had saved everything from their childhood. I bought a huge box completely crammed full of over 30 pairs of vintage knitted baby booties, sweaters and other baby related items. I bought two big boxes stuffed full of Boy Scout, Cub Scout, Eagle Scout and Order of the Arrow Scouts, including papers, certificates, about 40 handbooks, uniforms, patches and wool coats. 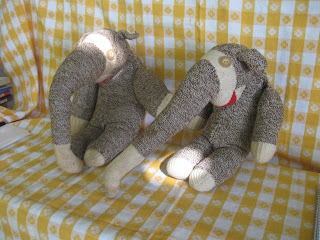 I filled my car twice and I spent a total of $60.00 on everything.  Saturday night, I pulled out four packages of 1980's Scratch 'n Sniff stickers and put them on ebay.  As of today, the stickers are at $39.09 - so I just might pay for the entire two loads of treasures on those four packages of stickers.
*Photos are just a handful of random purchases.  As promised, I will show photos - just slowly!
Posted by Shara at 10:43 PM