Since I was a little girl, I have liked little stuff.  I used to collect my Cracker Jack charms and Bubble Gum toys in school boxes and an old money box.  I've always just like teeny little things.  You would think that I would have outgrown that, but I still love little things.
When I brought home all the stuff from this weekends sale, I swore it was all for sale.  And, it is - 95% of it is, I swear.  But there were some little things that I just had to keep. 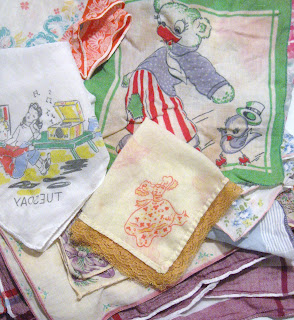 A stack of about 25 handkerchiefs, including a few little girl hankies.  (The "Tuesday" one is folded backwards - not printed wrong.) 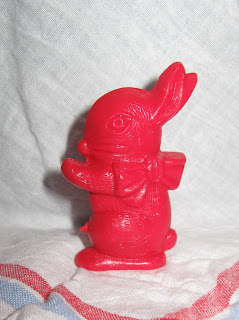 A tiny little red plastic bunny rattle that must have belonged to a doll.  It is about 2" tall and it really does rattle. 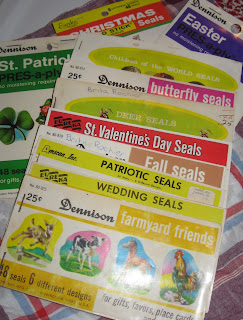 A stack of Dennison Seals for almost every holiday as well as seals for farm animals, apples, deer and butterflies. 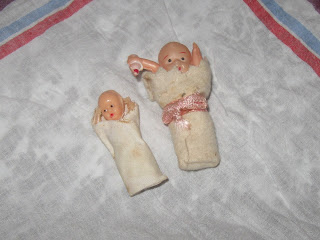 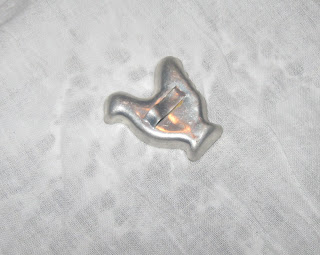 A rooster cookie cutter that is about the size of a quarter. 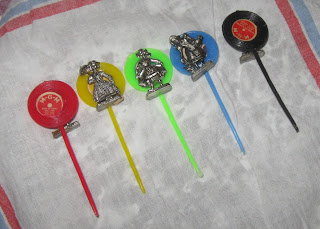 Cupcake picks with record labels from the 1950's with girls from around the world on the other side.  They do not make a lick of sense, but they will go into my cupcake pick jar and live happily ever after. 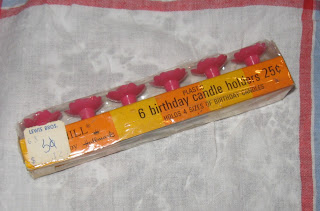 A box of pink Birthday Candle Holders with their original sticker. 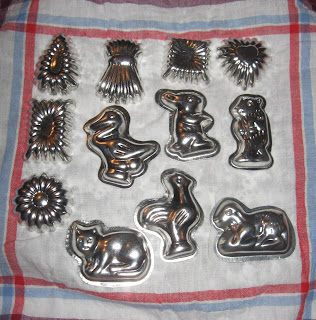 A set of little chocolate molds.  What a complete pain in the keester these things would be to actually use.  But, they are a) little and b) cute so I will C) keep them. 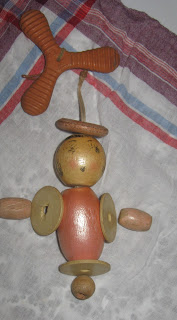 An old baby toy that was so severely knotted up, that I had to cut the string to salvage it.  I plan on restringing her and hanging her from a ceiling fan pull. 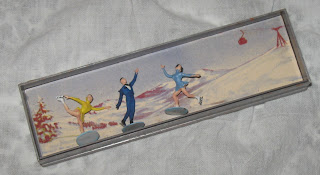 Three miniature ice skaters - less than 1/2" tall each in a winter scene box  - marked West Germany.  I think they might be for a train set.
Except for the hankies, which go in their own organized basket, all of these finds fit into a Quart Sized Ziploc bag, so I am able to keep everything without filling up the house!
~~~~~~~~~~~~~~~~~~~~~~~~~~~~~~~~~
I put a link to my ebay auctions over there on the right hand side.  I felt odd doing that like "HEY!@  I bought this stuff super cheap  - so buy it from em for lots of money, okay?!"  But, I keep receiving comments and emails about some of the things I have bought recently, so I decided to put a link over there.  Don't feel like you have to go look or bid.  But, since people are asking, well......there it is.  Thanks for all the love lately!
~~~~~
The Miners in Chile are coming up - I have to go watch.  Please, let it go well for all 33.
Posted by Shara at 10:07 PM