This weekend there were 400,000 motorcycles in the town to the East and 45,000 people visiting the Apple Festival in a town to the West, so there were tons of yard sales along the highway in between.  I tried to pick and choose carefully, because I am still in STUFF Overload.  But, how can you just drive by yards with a million boxes lined up?  YOU CAN'T!  I had to stop and dig in a few of those boxes! 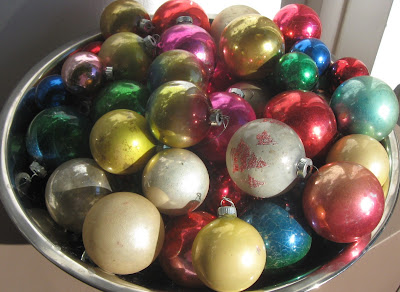 Lots of Shiny Brite's - all plain, but with a nice patina for making wreaths. 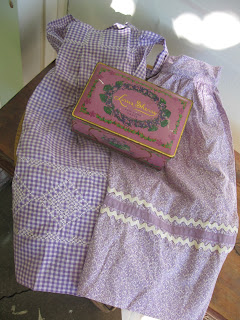 A dee-vine old candy tin in purple and two purple aprons (a gingham to keep, a paisley to sell). 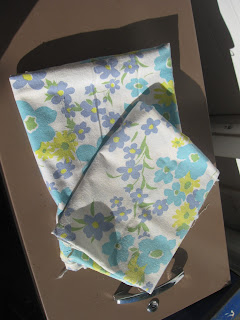 Two floursacks in a brighter pattern that I am accustomed to seeing.
The two aprons and the two floursacks cost a total of 25¢.  Score! 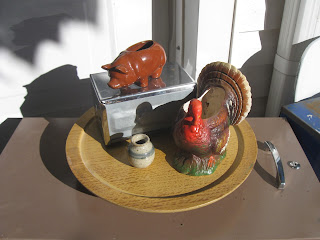 A red clay pottery pig for The Bean's pig collection, a wee pottery vase for my collection, a vintage Turkey Planter to go with my rafter of turkeys (Google it!), a vintage restaurant napkin holder (have you seen those used as photo frames?) and a big Lazy Susan to use in the Booth. 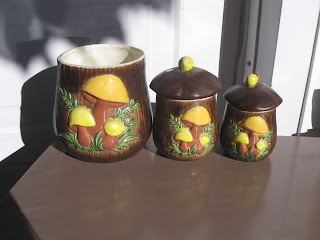 Three toasdstool canisters.  The big one is missing it's lid, so I will call that one a planter or a Utensil Holder.  For some reason, I sell a lot of toadstool items in my Booth, so I always buy them.  I paid 75¢ total for the entire set, so I can't go wrong. 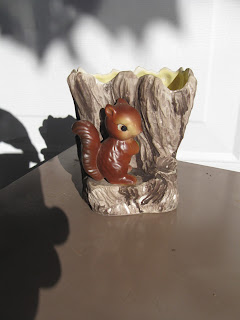 I bought this sweet little vintage squirrel planter to resell, but...well you can guess.  It's too cute to sell!  I have an Autumn display of acorns and squirrels right now, so this fits right in.  (I have cropped all of these photos over and over, but they are still showing up in their regular size.) 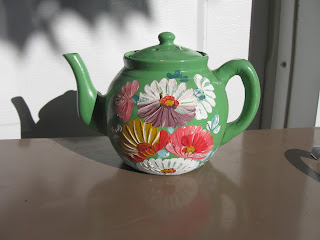 I stopped at a tent sale and found this Ransburg Pottery Teapot on a table for $5.00.  The lady having the sale told me it was $2.00, so I picked it up. 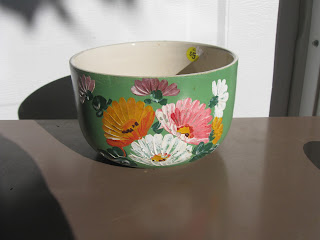 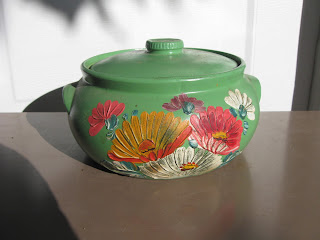 Then, I found this covered casserole marked $12.00 in a different box.  The lady didn't say anything, so I didn't pick it up.  When I was paying for the other two items, I decided to ask about it and she said I could have it for $2.00 too.  I really love this stuff, but I just do not have room for it.  So, to the Booth, it will go.  *weep* 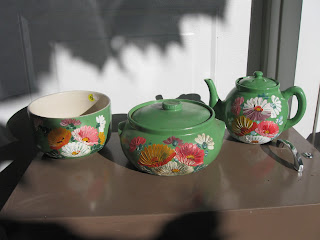 It's pretty, isn't it?
And now, a personal whine.  The Breadman had his first week of vacation planned in May, but only got two days before they had to call him back to work due to an Emergency.  So, starting yesterday, he is getting a full week of vacation, plus the days he missed in May.  All at once.  Eleven days total.  Give me the strength to accept the things I cannot change....﻿  As if having him underfoot for eleven day straight isn't enough.......he is SICK.  I cannot handle a sick husband at home for eleven days.  I know he will get better eventually, but Holy Schmazoley, until he does get better........Give me strength......
***Don't forget to read the post under this one.  Tell me three things you thrift for........
Posted by Shara at 10:19 PM