Nearly every blog I read, somewhere along the line, they find a Leo Ward Bluebird when they are out thrifting.  They are sweet little bluebird, made of a beautiful deep blue glass.  If you have ever gotten a swap, gift or won anything from me......you have probably received a Bluebird in your box. 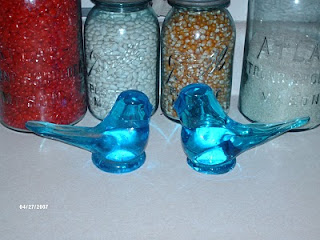 The company is actually located right here in my neck of the woods - Terra Studios.  Although most people think if it isn't signed Leo ward, it's a fake.  But, that's not true.  He designed and developed the bluebirds.   And then he taught fellow artisans, including his wife and children, to make them bluebirds.  You may find Leo Ward and his wife Rita Ward as well as a host of other signatures on the bottom of the bluebirds.  They are all what people refer to as "Leo ward" birds.  They are all, in fact, Terra Studio Bluebirds of Happiness.


When I say they are plentiful in my area, I am not kidding.  There is usually one at every thrift and yard sale.  maybe more than one.  I had picked up a couple to place in a windowsill along the way.  When we cleaned out The Breadman's parents house after they died, we found those bluebirds everywhere.  We knew she had a few in her windows, but when we started packing things up, we found one here, one there, one int he bathroom, three in the laundry room and so on and so on.  We even found one behind the stove when we moved that out!

The Bean has always had an eye for colored glass so he likes these birds.  We decided that the birds from that house would make a nice memory for him to have when he was older.  Now we pick them up at yard sales when we see them, but we try not to pay more than 50¢ for any of them unless they are a different color or unique.  We only buy the single birds since the doubles take up too much room.  We do have a few of the smaller ones, but those came from the in-law's house.  When I heard there was going to be a special edition pink bird for Breast cancer, I wondered if I would ever find one.  I was surprised when I found one about two months later at the thrift for 25¢. 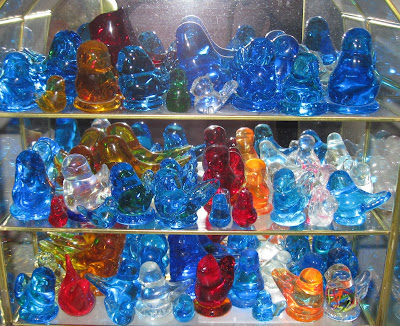 I do have them all in a glass case.  I don't really like them all crowded in there,  but they stay organized and clean.  That's a big one - clean and dust free!  Taking photos of them is not easy with the glass background. 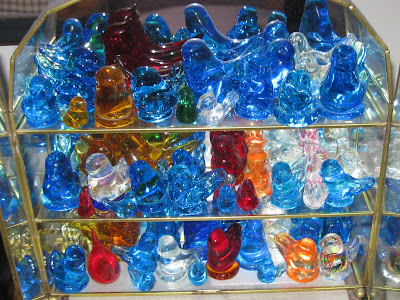 We have about fifteen of them that have broken tail feathers. They were still too pretty to toss.
So, I put those out side on the window ledge of our bay window for the sun to sparkle through.  They look pretty all lined up. 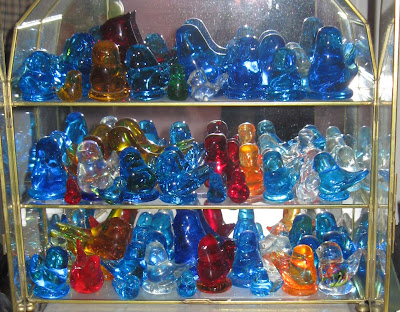 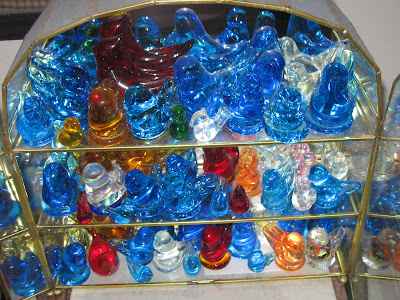 They range in size from a bit bigger than your thumbnail to palm sized and every size in between.  I have a special love of the tiny ones, so I nearly always pick them up to add to out collection. 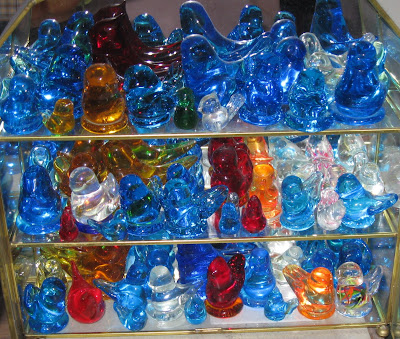 As we cleaned out my Grandmother's house, we found a box full of them there too.  So, home they came.  I recently saw a photo of The Breadman's Grandma's house and noticed a collection of them there too.  I don't know what will happen to her collection, but I wish some of them could come to The Bean.  It makes a nice collection and a nice way to remember his three Grandparents.  I have a feeling that The Bean might be able to open his own "Leo Ward" museum someday!

***This post seems to be popular for those of you looking for values on Leo Ward birds.  Please visit Terra Studios for information.  I will say that most Leo Ward birds are lovely, but not particularly valuable.  I'd guess the $10-20 range.
Posted by Shara at 11:54 AM