I went to an auction today.  It was a Divorce Auction, which I found sad within itself.  The couple were avid Art Pottery Collectors and had over 300 pieces of pottery.  And, it was all in the auction.  I swooned at the ad and then I went to the website and looked at the Gallery photos.  Once I got a glimpse of the pottery photos, I knew I had to go. 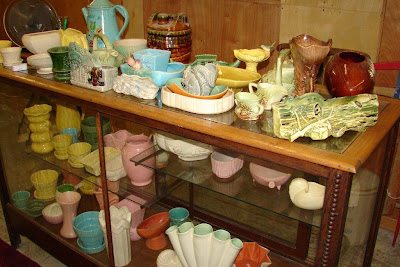 *slobber*
When I got there, the auctioneer was one that I wasn't familiar with and he had a different way of calling the auction.  I couldn't understand a word he was saying!  He really rolled his "rrrrrrr's" on "dollars" waiting for the bids to up.  Luckily, not long after that, he took a break and a different Auctioneer took over.  I could understand him!  Hurray!
I could tell that the bids were going to be way out of my comfort level.  They would sit four pieces of pottery on the table and highest bidder got choice of the pieces.  So, say you were interested in the pink one, but someone outbid you, but they took the blue vase and that left your pink on still up there.  Then he would do choice again for the highest bidder.  Then you bid again and if you got high bid, you either got your pink vase, or maybe someone else outbid you, but they took the green vase.  Then they would take bids on the two remaining pieces.  It was crazy trying to keep track of what piece sold for what price and if the one you wanted was still in the lot or not. 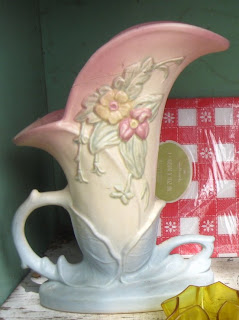 I saw a piece of Hull Pottery exactly like this one sell for $125.00.  I got mine for 50¢ at a yard sale.  Oh, sure, mine has a re-glued part on one side, but I have it displayed the other way and no one knows!  I'll take all my yard sale pottery with a few chips and flaws.  I don't mind.
Eventually, the auction frenzy got me and I had to bid on something.  I heard "memorabilia" and "$2.00", so I bid and won. 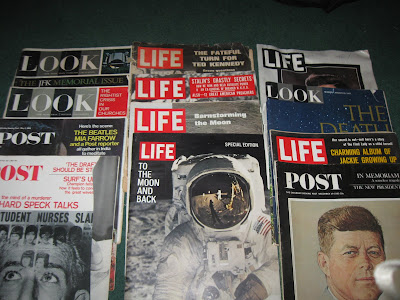 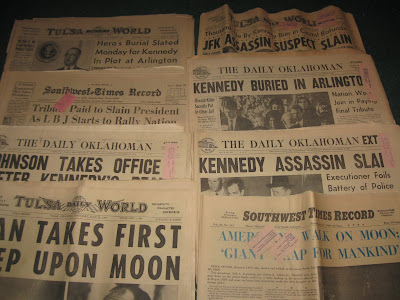 I got a huge stack of newspapers and magazines dating from Kennedy's Assassination, The Moon Landing, John Kennedy Jr's Death, Princess Diana and even up to Obama's Inauguration.  They will be fun to red for their information, plus all the fun old ads.  I know I got my $2.00 worth. 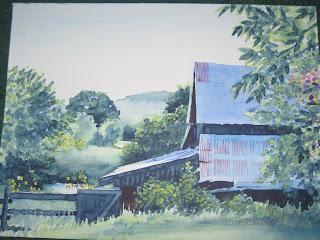 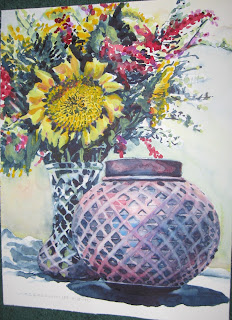 Hidden amongst the newspapers, I found these two lovely watercolors by a local artist.  Each one had a bill of sale with it for $50.00 each, so maybe I can resell them.  They are pretty though - I know where that barn is, so I may have to frame it and keep that one.
I couldn't buy just one thing, so when I heard "$2.00" again, I bought this: 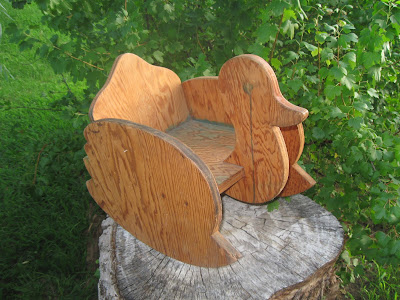 A little homemade duckie rocker for $2.00.  I'll give it a coat of paint and throw it in the booth.  It's kind of cute.  I suppose it's worth the $2.00.
Here's when things get dicey.  They were selling furniture, so I wasn't really paying attention, because it was all pricey and I wasn't in the market for any furniture.  I saw them hold up an oak desk.  Then I heard the bidding begin at $100.00.  Then he started back peddling.  And, then I heard my magic price....."$2.00."  So, I bought it.  It looked pretty small from where I was waaaaaaaaaaaay in the back of the building.  I thought I could sell it in the booth and use it for display too.  I couldn't go wrong for $2.00. 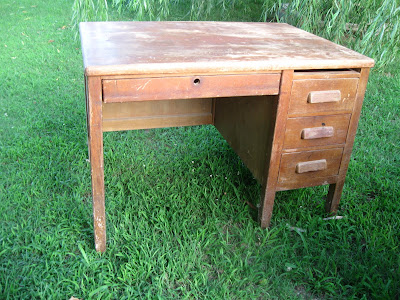 Or maybe I could.  It's freaking HUGE.  Almost as big as my actual booth. 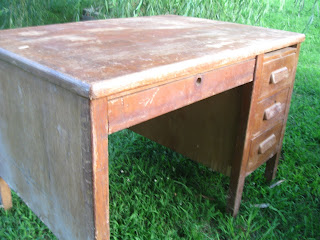 It would make a good project.  If I had the time or the inclination to do that sort of thing.  It could be painted white and distressed.  It would make a good craft table.  Oh, well, you win some and you lose some.  At least it was only two bucks!  I'll stick it on Craigslist tomorrow and if I don't have any takers, I may salvage the drawers and toss the rest.
The Boys had gone to play Miniature Golf while I was at the auction.  When they came to pick me up, let's just say that the Breadman was not too thrilled with my purchase.  It barely fit in the back of the VUE and The Bean had to sit on only one butt cheek for the entire ride home.   My bad.
I saw lots of fabulous things and learned a thing or two in the process.  I saw the man that has the booth across from me at the flea market.  He has a ton of pottery in his booth, but they are priced very high.  Now I know why.  He pays $40.00 for one piece, then marks it $100.00.  That's all well and good if it sells.  But, I'd rather stick to my low end pottery and actually sell it.
I had fun and plan on going to another one soon.  And, I will try to make wiser choices and not jump on those $2.00 items!  Yikes!
Posted by Shara at 10:25 PM