This weekend we had company in town from Arizona, so I was busy and didn't really have a chance to go yard saling.  But, Saturday I was on my way to my Grandmother's when I spotted a field full of JUNK.  Hey!  I know that junk!  They have a sale once a year either on Memorial Day or Labor Day weekend.  They didn't have it on Labor day, so I should have known it would be this weekend.  I was dressed "up" sort of, and not really prepared to dig in junk in the sun in 90 degree weather.  But, let's face it, a gal's gotta do, what a gal's gotta do.  I stopped and made a brief dig through the junk.
A little background on these sellers.  They are dealers.  I don't know where or how they sell, but they buy tons and sell off the rejects at this sale.  Stuff is piled on tables, tarps and in boxes and it is all either 25¢ or 50¢ an item.  I know that they think it is all rejects, but there is still some cool stuff in there.  A few years ago, in amongst their rejects I found a Steiff Turkey for 25¢ that I sold for $127.00.  So, even dealers miss a thing or two.  ( I just may have found another hidden gem this time too!)
The first thing I noticed was a tarp covered in boxes and boxes of books - 25¢ each or 10/$1.00.  It was really much to hot to schlep a bunch of books around, but I decided to look just in case something interesting popped up.  I did find a pile of 1940's yearbooks from Independence High School in KS.  The fashions are spectacular.  There are also sections for the "Colored Pep Club" and the "Colored Basketball Team" which make me uneasy, but certainly do represent a time long gone.  (Thank heavens!)
On to the boxes of JUNK!  I gathered up quite a few things and asked if I could start a "pile".  "Oh, yes", they said, "We love piles!"  After I gathered it all up the man asked where I sold things.  I asked how he knew and he told me that I had picked out everything that they were having trouble letting go - all the truly neat old stuff.  He said, "You have a good eye".  Hey, thanks!
So, on to the junk... 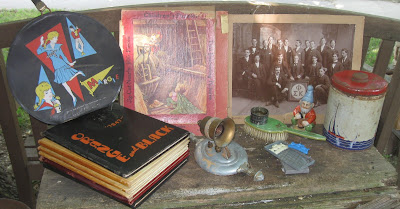 It's not my usual fare.  Nothing cute and kitschy.  But, still it's neat stuff. 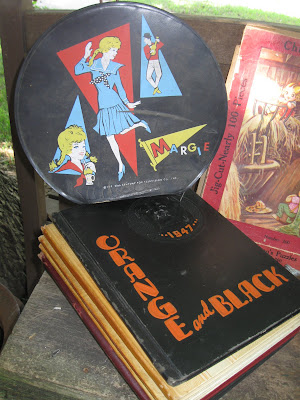 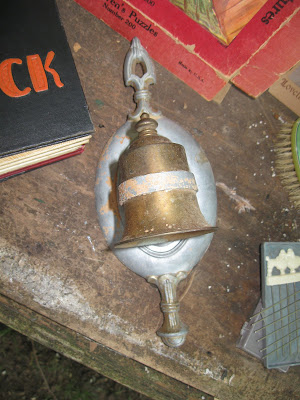 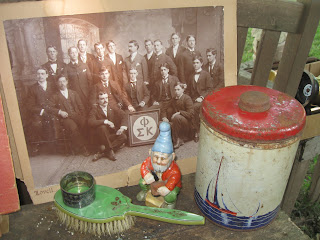 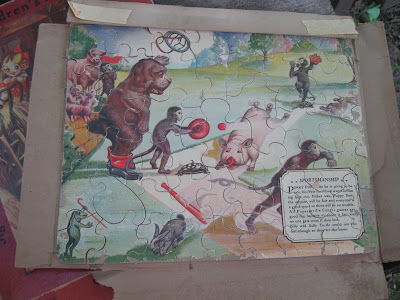 A fun old puzzle - love the fun graphics on this one. 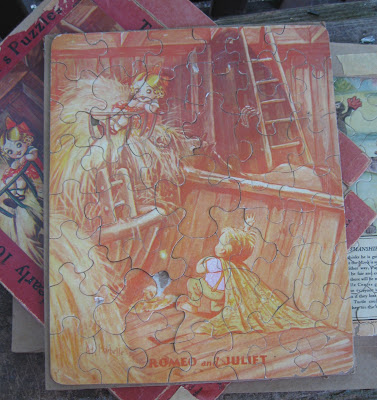 And, another puzzle - this one a bit faded, but still cute. 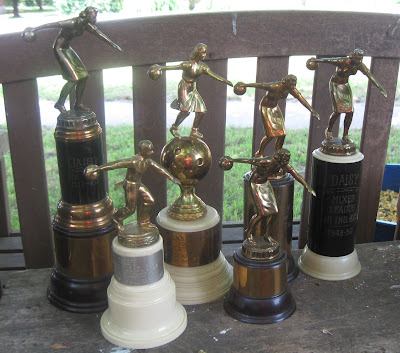 I love these old bowling trophies.  The are from the late 1940's to the early 1950's.  All of them are from the Daisy league and Gertie Talik won them.  They are heavy as heck!  That one in the back with the bowling ball weighs about nine pounds.  I may keep it as a weapon!  They probably aren't worth a fortune, but seeing them all there together, well, I had to keep them together.  Why am I sentimental over other people's junk?
And, maybe my hidden gem.  I spotted this gold pen at the bottom of a box.  It was marked Paris, France and looked nice, so for a quarter, I grabbed it. 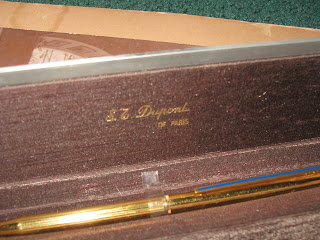 I did a bit of research and discovered that these pens can be worth a lot of moolah.  The fountain pens are worth the most (up to FIVE GRAND) , but the ink pens can be valuable (several hundred) as well.  Since I only have the quarter invested, I took a leap of faith and put it on ebay.  I had a bid of $9.99 almost immediately, but it's currently only at $15.50. That's still a profit, but we'll see what happens in the end.
So, what did YOU find this weekend?
Posted by Shara at 9:59 PM