This morning, as I trolled Craigslist looking for one perfect sale of vintage goodness, I spotted this ad:
Dealer's stash AND special guest star!
Antique dealer and flea market owner is cleaning house and friends and family have pitched in for a huge sale.
Unique and quirky items.  Lots of furniture, many antique and vintage items including beds, cribs, chairs, tables.  Garden and interior decor items, games, jewelry. Priced to sell!
Special guest appearance! The local man recently featured on TLC's Hoarders will be available to sign autographs!
Holy Moley - a possible Hoarder's yardsale?????  This, I had to see!  The prospect of seeing the contents of a house featured in Hoarder's spread out across the lawn intrigued, but also scared the beejeezus out of me.  And, it seemed sort of wrong that I was excited to go drag a bunch of their stuff to my house.
When I got there, I was sorely disappointed.  It was actually the owner of a local antique store/ flea market having the sale and her husband had helped clear out the stuff in the house, so he was the person "featured" on Hoarders.   Boo hiss.  False advertising!  Not only that, but this particular woman that was having the sale is a known snoot.  Thinks she knows it all.  In fact, I have mentioned her in the past here.  She is so rude to me, but really, I think to everyone.  I found a wooden cutlery drawer without a price on it.  When I asked her, she hemmed and hawed and said, "Well, I am going to need at least six dollars for that - I planned on taking that to the shop."  "Well, then do."  I said.  Pbttttttttt to her.  Then I had three yard long prints that were rolled up and in a bedpan (I kid you not).  She said, "OH, those are going to be FAR MORE than you are willing to pay."  And, she put them on the table behind her where I couldn't get to them.  I wish I would have had a hundred dollar bill to whip out and said, "Would $100.00 be enough?"  Then I would put it back in my pocket and walk away laughing manically.  I can dream, right?
My theory is that she sees me buying things and figures out I have a good eye and maybe she made a mistake selling something too cheap.  She did quote me a decent price on a set of old blue canisters with butterscotch bakelite handles and I really meant to go get them, but in the end, I was so PO'ed at her, I just wanted out of there.  Junking should be fun, not a headache!  I do wish I would have grabbed those canisters!
I did buy a few things, despite her nasty behavior. 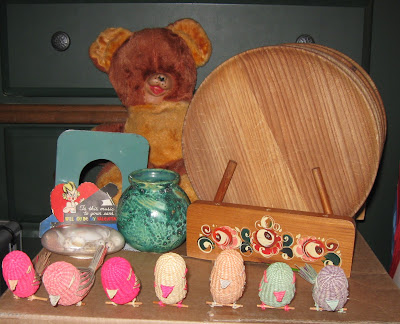 The seven little wicker birds were 50¢ and they just make me happy!   The wooden rack full of old wooden plates came from a different sale for $1.00.  I've never seen anything like it before. 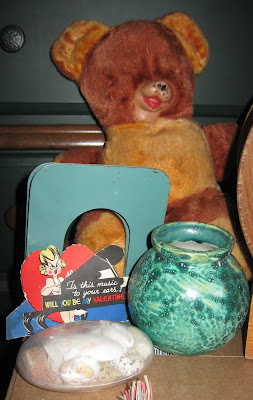 An old teddy bear with a rubber face (yes, he is missing his eyes, but I have a bag full of vintage animal eyes and he will soon he good as new - or rather, old), a pair of metal bookends in a wonderful chippy aqua color, a vintage handthrown vase, an old Valentine and a handblown paperweight full of seashells. 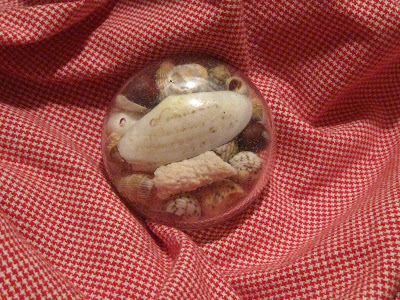 The paperweight matches one I already had that I picked up about 12 years ago.  On the shell it says Souvenir 1908.  That's 102 years old! 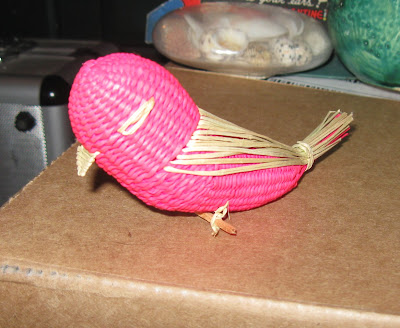 One of the silly birds.  Too cute! 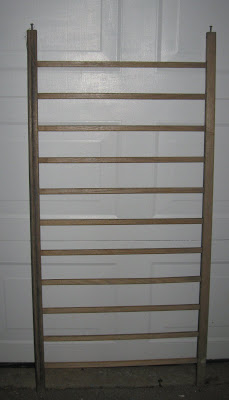 I've been wishing to find one of these for a long time.  The side rail from a vintage crib.  I wanted one to hang my tablecloths on.  Now I think I will use it in the booth (which I am sure is completely sold out after two full days of business.  Ha ha) to display linens and such.  When I saw it leaning on the garage, I thought "YES!" then I remembered it was McSnooty's sale and figured it would be priced high.  But, for some crazy reason, she only had it priced 50¢.  Score for me.
One last story about McSnooty.  Several years ago she had a warehouse sale at her business.  I found a row of twelve teeny little pieces of pottery lined up - all for 10¢ each.  I collect miniature pottery, so I bought them all.  A few years later I was watching Antiques Roadshow and they appraised a pair of Marie pots.  I thought that they looked familiar, so I had a look through my pottery and low and behold, one of those teeny 10¢ vases had a Marie signature on it.  The large ones on the Roadshow had appraised at $55,000 but I was still pretty hyped, even though my piece of pottery was smaller than a golf ball.  I put it on ebay and it sold for a little less than $400.00.  So, take that, McSnooty Booty!
I really don't usually hold a grudge.  She's just so darn MEAN!
Hope you all find some good JUNK this weekend!
Posted by Shara at 10:38 PM