I love you guys.  Sooooo many nice sweet comments on my last post, and not just for trying to win those silly Valentine's.  Really, everyone is so nice.  Thank you.
Grandma update:  On Saturday we finally convinced her to call the ambulance.  The first responders thought they would give her something for gas and send her home that night.  But, it ended up that she had a bleeding ulcer and was literally bleeding to death.  (Which makes me realize now that the ambulance techs must not have checked her out that good - they left without the lights and drive slowly.  Meanwhile, she was bleeding to death.)  She is very, very sick and would have died if not finally gotten help.  She is not out of the woods yet, though.  Having said that, I will tell you that she is being the most difficult patient ever.  She had a screaming fit at the two nurses last night and I was so completely overwhelmed by her loudness and rudeness that I broke down and started wailing.  The nurses thought I was concerned over Grandma (that is weird to say because I only call her by her first name, not Grandma), but I was crying for those poor nurses.  I know they are used to it, but it killed me to see them trying so hard to help her and she absolutely did not care at all.  Right before we left, she blamed my Mom for making her go to the hospital.  Guilt trip number three hundred.
Don't think badly of me for talking smack about my Grandma.  She is a different kind of person from anyone else on the planet.  Very difficult, very selfish, very much "her way or no way" and all that other stubborn stuff.  And, not since she got older.  From day one she has been that way.  She's not the "I made you cookies" sort of Grandma or "Here's a birthday card" Grandma.  So, not your usual Grandma.  In fact, is she knew I was referring to her as "Grandma' she'd pop me in the mouth.  "You don't call you MOTHER 'Ma' so don't call me Grandmaaaaaaaaaaaaaaaaaaaaaaaaaaawwwwwwwwwwwww."
She's not out of the woods yet, the scope could cause heart failure, but they take precautions.  She is 84 and a diabetic.  But they think it will work.  She'll be in the hospital for days and days then to Rehab (or that will be fun news to break to her....) for a few weeks.  Then either home with help or somewhere where there is help.  She has a wonderful old doggie that is our concern - finding help with her and making sure she is well taken care of - she loves my Grandma and she is very sad that she isn't home.
She is completely addicted and I mean addicted to Diet Coke.  Guess what probably caused her Ulcer?  Diet Coke.  Guess what she can't have any more?  Diet Coke.  Guess who isn't going to tell her that?  Me. 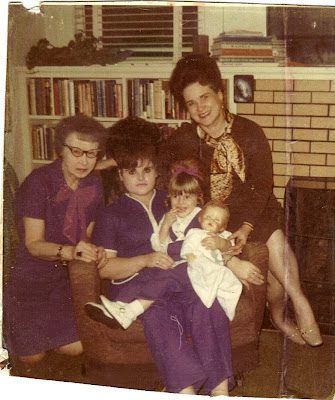 Since no one likes a post without a photo.  Here's me, my Mom, Grandma in brown and my Great Grandma in purple on the left.  Four generations.
I'll be back when I can.  Thanks again everyone.
Posted by Shara at 9:39 AM