Today, I thought it was going to rain. It did rain this morning, but by 10:00 it had cleared up but it was still cool and breezy. I thought I might see if anyone had set up sales later because of the rain. And, to my delight, there were a lot of sales getting a late start. Which meant I got the 7:00 am stuff at 11:00 am! I wish every Saturday could be that way!!!!

Now, I warn you. This first photo is a doozy. I got all artsy with my junk. Much to the wonder of most of my neighbors. "What's she doin' with all that JUNK? Takin' pitchers?" *I don't really live in Hillbilly-ville.* 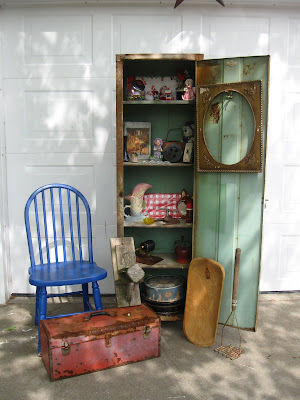 My finds for the day. I wish I could just leave this set up and enjoy it like this. It looks fun this way! Where to start - the blue painted chair was 25¢. I know! It is a bit bright for my decor, but I put it in the backyard by my mantle and hung a flag over it. 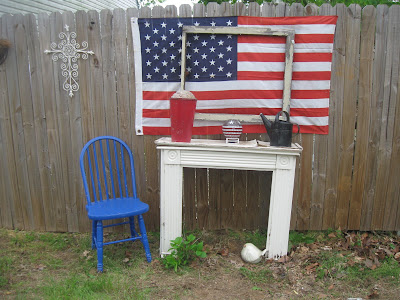 I'll add a rusty bucket of red flowers and instant Americana. Mother Nature will weather it to pure perfection in no time. She weathered last year's chair right to the garbage dump. 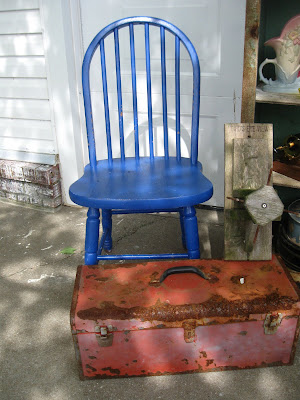 The 25¢ chair, an old squirrel feeder for 25¢ and a fabulous old rusty tool box for $1.00. When I asked about the toolbox, no one at the sale had ever seen it before even though it was sitting at the edge of their driveway. Maybe someone set it out to load something? Or where they just forgetful? Either way, I scored it for $1.00. It is in front of the bay window awaiting some red geraniums. 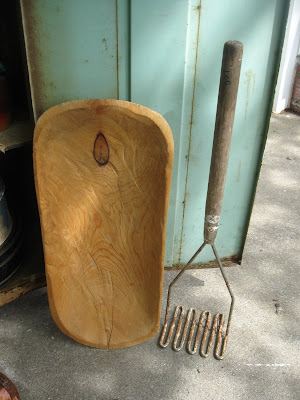 A nice old doughbowl. I've always wanted a doughbowl for displaying things on the coffee table. It was $5.00 which is really a good deal, but it took me quite awhile to decide to pay $5.00 for it. That is on the high end of my spectrum! Now, that thing to the right, is, I am sure, some sort of mortar mixer or grout tool or something. But, you have to admit - it looks like a giant potato masher. Even the old man that sold it to me referred it to as "his giant tater smasher." *Again, I really do not live in hillbilly-ville.* I'm thinking of hanging it on a the wall as sort of a picture hanger and sitting a vintage cookbook on it. Ideas are still in the works...(It was $1.00). Above it, although it isn't in the photo, is a great old 25¢ frame that needs a coat of white paint.


Shall we discuss the cabinet now? I got it at the sale with the giant tater smasher. I saw it and basically ran to it, hopping over an Exersaucer and an old treadmill. 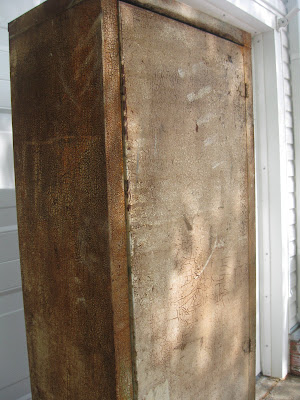 It is rusty, crusty, shabby, chippy and every other glorious word in my vocabulary. I have cleaned it up a bit since I took this photo. Just to get the actual dirt off of it. Not that awesome patina. 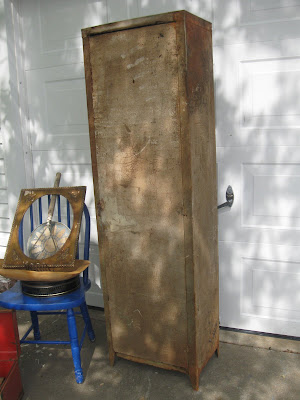 It is so me. I adore it. It was only $5.00. The Breadman (he's still on vacation) was with me and was surprised that it was still there late in the day at that price. That is because I see beauty in old junk and it truly looked like old junk sitting at the edge of the yard. But, you can see in the first photo - it has an awesome green color inside with shelves and all sort of hooks here and there. It will go in the living room full of my holiday collectibles. *Bought myself a lot of stuff today, didn't I?* 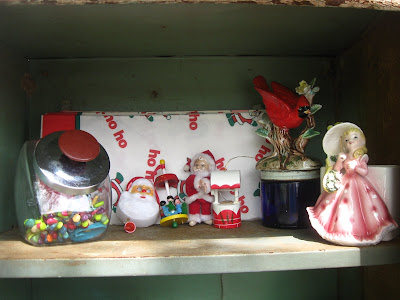 Shelf #1: An old candy jar with a string of colored Indian Corn inside, some vintage Christmas items, an old blue glass Noxema jar, an occupied JAPAN bird and a sweet girl with a parasol planter. Total for everything: $3.35. 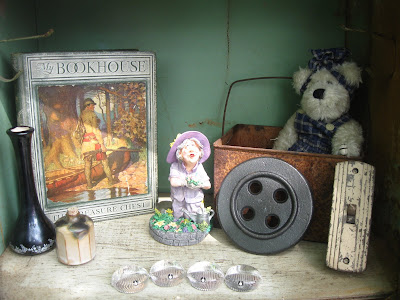 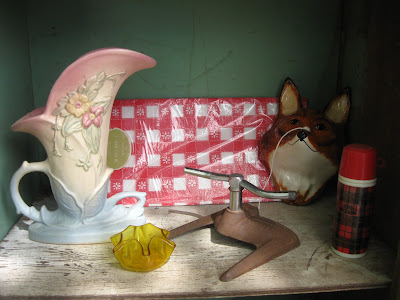 Shelf #3: A Hull vase for 50¢, gingham paper tablecloth, old rusty sprinkler, amber Blenko vase, fox string holder and a miniature thermos bottle. Total: $1.50. Now, before you get too excited about that Hullvase - it has been broken and reglued in two places. But if you place it just right on a certain shelf and hold your head to the left a bit - it looks like new! You can't tell can you? Neither can I. I would never be able to afford a perfect one anyway. I forgot to photgraph Shelf #4: A fishing reel pencil sharpener and a cast iron apple. Total: $1.30. 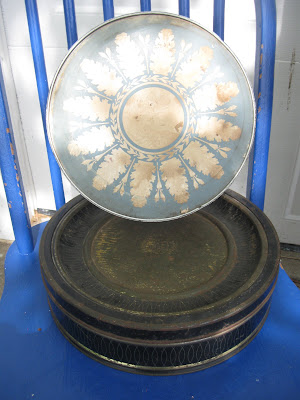 Two cool old Sunshine Biscuit tins for 50¢ each. Destined for swaps or ebay - I'm not sure yet.
I couldn't believe the luck I had today! It makes up for the lack of junk on our trip. We hit several thrifts and a huge road side yard sale and I only bought two things! 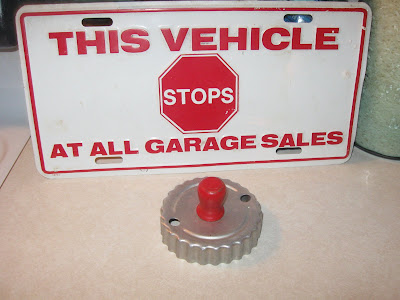 A huge red handled biscuit cutter and that Garage Sale license plate. The Bean found it and told me, "You have GOT to get this!" So, I did. But, it will not go on the car.
I'll be back on my next post with a giveaway that I won and a surprise box full of goodies that I received from a blog reader. A male blog reader! A male firefighter blog reader! Ladies, did you know guys read our junking blogs? And, this guy did an awesome job sending me things that I love! Stay tuned....
Posted by Shara at 9:33 PM