My entire life, my house has been the house where all the stray dogs and cats come for food and water and the birds and squirrels depend on for bird seed and water. I've never been surprised to see another cat show up for a day or two or even seven or eight years as we have taken in three of those strays over the years. 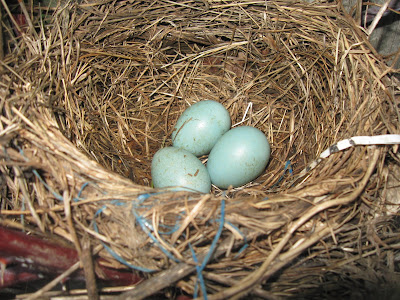 So, when we found the Robin's nest on the fence, it seem appropriate that it would be in my yard. A safe haven for all animals. No baby birds yet, but the eggs are still there, even after the nearly six inches of rain we have had the past week.
I've mentioned in the past that we have had the same bunny in ourbackyard the past two summers. I call him Mr. Bun-Bun. I was worried that he might not return after the ice storm, but about two weeks ago, Mr. Bun Bun made his return, much to my delight. I love having him in our yard all summer.

Lat night, The Breadman was mowing the backyard when I heard the mower go quiet. A minute later he was knocking at the door. I opened it and saw him holding this: 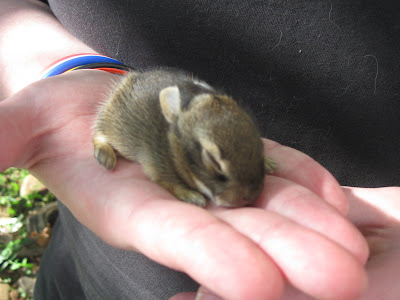 "What is it?" he asked. I thought it was s squirrel while The Bean thought it was a rat. Neither of us was interested in it and I was dreading seeing how a poor baby squirrel was going to survive. I went to get my camera and when I returned, his definite bunny ears had popped up on his head. A baby bunny - now that's a whole 'nother story. We had noticed a hole in the backyard about a week ago and wondered what that was and where it came from. The baby bunny was near the hole when he found it, so we went out to look.

Now brace yourself, this is extra ordinarily cute and adorable. Are you ready? 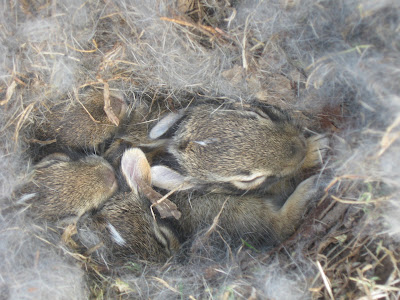 In the hole under a pile of Mama'sbunny hair was a nest with four tiny adorable baby bunnies. Four! That we know of! There might be more! That's enough exclamation points! I mean, seriously, have you ever seen such cuteness? Oh my! Now before anyone chastises us for touching the baby bunny - it was away from the nest and had scurried out due to the lawnmower. It is miracle that DH didn't run over it in the first place. We put it back in the hole and didn't touch the others. I ran in and did some Googling and it said that a Mama Bunny will NOT reject their babies if you touch it, so that is good. It suggested putting a ring of flour around the nest to see if the Mama is going in and out so you know they are being taked care of by her. So, we did that and I am happy to report that the flour is all gone and that covering of hair is three time thicker than it was. Mama is hiding her babies from us! Now I am worried about more rain and wind and dogs and anything else that might bother my baby bunnies! *Mr. Bun Bun is now known as Mama Bun Bun.*

So, you would think that would be enough, right?
Wrong.

Today we went to the park with my Mom. While we sere sitting in the park talking, a little squirrel came down out of his tree and sat at the base of his tree looking at us. We were amazed at how he sat so close. We had no idea what was about to happen. 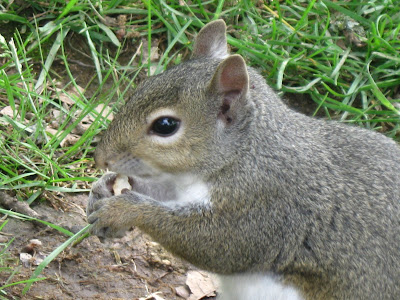 We had some pretzels, so we broke him off a little piece. He sat thisclose and ate it while we watched. The photo above is not zoomed in on at all. He was right there. 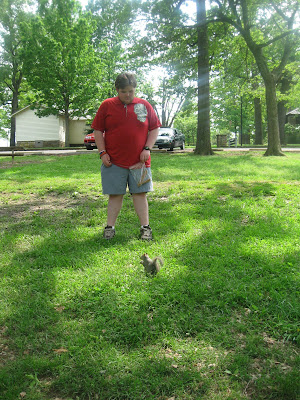 He sat right by The Bean and enjoyed his pretzel. 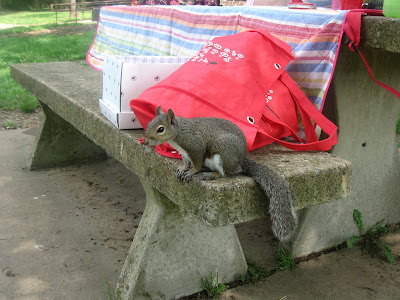 Then he climbed right up beside me and tried to climb in my bag. 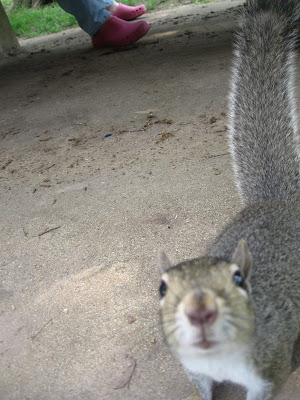 "Hey, whatcha doing?" (This one cracks me up) 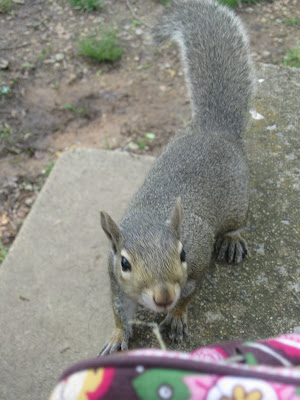 He gave my purse a sniff.


And he crawled on my MOTHER!

We never touched him or bothered him so he finally went along his way. We couldn't believe that he was so tame. A bit later, another family came to play at the playground. The squirrel made his way towards them and started to interact with them. But, they decided to hold him and snuggle him and show him to their little kids. The squirrel behaved, but they were really being wreckless holding him and carrying him around. One of the ladies walked up towards her car saying, "I'm going to put him in a box." We stopped her and asked what she was doing. She thought he was so sweet that she was going to take him home to live in her pasture (Yea, right).

We strongly suggested that she not do that, but she went and got the boxes anyway. The people were holding him and trying to coax him into the box. We didn't really want to see that happening since we were against it, so we got in our cars and left.

Or maybe, just maybe, we went to the Park Ranger and tattled on the squirrelnappers! This is at the Civil War battelfield and you are noteven allowed to pick a flower as it is a federal Offense. So, no squirrelnapping! The Park Ranger called out the troops and headed over to tell them NO You are not taking the squirrel. I am a squirrelnapper tattle tale and proud of it. But we did get the hell out of there before they came after us.

We are brave, but not stupid.