I Just Paid For That 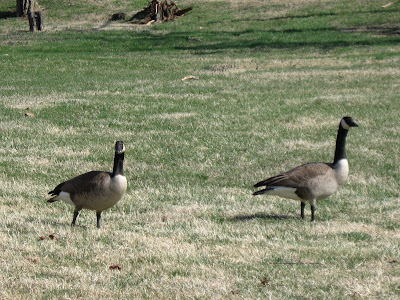 At that last stop, I spotted a box of older linens sitting by the check out counter. I asked if they were priced and she told me they were so much each depending on size. I secretly wished i could just buy the whole box and go through it at home, but decided to just dig there. I asked the only person working the counter if I could take the box over to the furniture area to look through it and she said yes. So, I took it over to a small end table and started sorting through doiley's, tea towels, pillowcases, tablecloths, etc. I was pretty focused on what I was doing and The Bean and The Breadman were standing there watching me.
That's when this young college aged couple stepped up to me. The guy said, "You'll have to fold that back up, I just paid for it." "What?" I asked. "I just paid for that, you'll have to fold it back up." I stammered, "But, the girl told me I could look at it" thinking to myself I wished that I would have just asked to buy the whole darn box. "Well, I'm sorry, but I just paid for it," he said. I was sick knowing that I would never know what was in the bottom of that box. Slowly I put each item back in because I didn't want to wrinkle them or just stuff them in the box since he had just paid for it. When I was done, I picked up the box and handed it to him.

That's when he looked confused. "What's this? " he said.

"You said you just paid for it, " I said, starting to get a little PO'ed at the whole situation.


That's when his wife realized what was happening, laughed and said, "Not the box! The table! We bought the table!"

He handed me back the box, picked up his table and left, still confused. I'm not sure he really did ever figure out what was going on. He wanted his table and I wanted that box of linens. I asked the boys if I looked stupid and they both said they thought that the couple had bought the box of linens. The Bean said, "I thought now why would be want a bunch of dishcloths like Mom would want?" Hey!


So, what did I find in the box once I realized I could dig in it after all? *My computer is supposed to automatically flip my photos upright, but for some reason tonight it isn't doing it. When I do get them flipped, they flip twice and are upside down. So, sorry for the sideways photos.*** 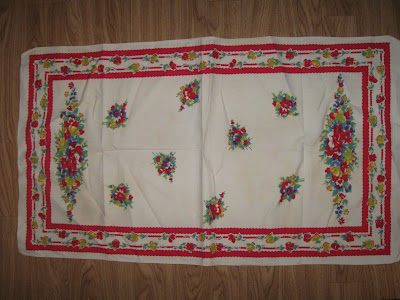 A nice bright linen dishtowel. Love those bright colors. I thought it was a tablecloth when I first spotted it. I wish it would have been.... 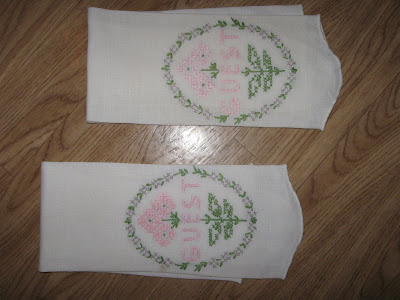 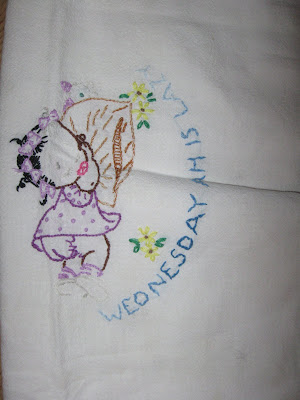 A "Wednesday" Tea Towel with a Pickininny girl that says "Wednesday Ah is Lazy." 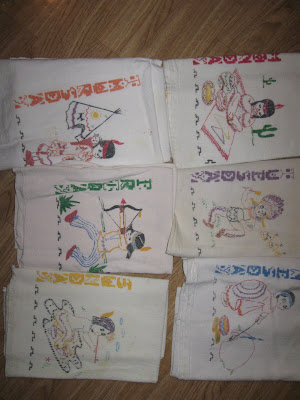 Every day (except Saturday) tea towels with Native Americans on them. I haven't thoroughly checked these out to see if they are Politically Incorrect too. I think they are respectful - no Redman or "Me Smokum Peace Pipe".

I left a ton of other tea towels and things, but I got the really good stuff. I never used to like linens, now I think I am obsessed.

Speaking of which...there is a sale tomorrow at a house where the lady collects everything, plus she buys at auctions to resell too. I struck up a conversation with her one day at a sale and she said she would stockpile tablecloths for me and have them at the next sale. WooHoo - let's hope she didn't forget me! Cross your fingers!