Friday I went to an Estate sale. It had been advertised on Craigslist for two weeks with teasers, but no address. They didn't want people dropping in to shop so they didn't announce the address until Thursday night. I don't usually go to company run Estate Sales thinking I will find much that I can afford, but I do go to have a look, generally. When I read the address, I realized that it wasn't more than a mile from my house. I got there about 10:30 Friday morning. I knew it would be crowded with dealers and buyers so I didn't get in a hurry to be there first thing. And actually, the sort of things I seem to like, no one else wants anyway. (Fancy that, right?)

When I got there the house was bursting at the seams with things. Here is a photo tour of the Sale. It was chock full of mid-century furniture, lots of collectibles from around the world and thousands, I kid you not, thousands of owls. They were cool and interesting owls from around the world and not kitchy 1970's avacado green and orange owls. When I started looking at the sort of things that interest me, aka JUNK, and was pleased to see that the prices were affordable. So, I dug in to see what I could find.

The first thing I found that made me eternally happy were these old journals. 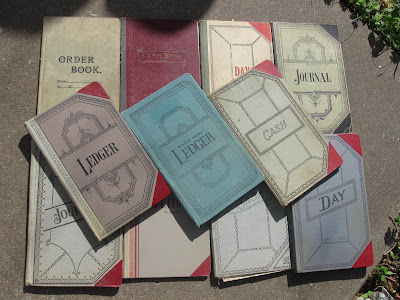 They were in a box that said, "$2.00," so I pawed through them to see which ones I wanted to buy. That's when the guy working there told me that the entire box was $2.00. I handed him two bucks PRONTO and sent The Bean to the car with my treasures. These are financial records, every line of every book lists every cent that the home owner's (Marge) Mother had keep as well as Betty in her adult years. On 12-26-1927 the Mom purchased two rolls of toilet tissue for .05¢ each. On 12-27-1927 she paid $25.00 to the hospital for "Baby - Marge." T.P. CHECK! Baby CHECK!

Marge, who was actually known as Betty, went to The University of Kansas - KU and was a proud Jayhawk supporter. I found many old Jayhawk items including all her Jayhawker Yearbooks from 1947-1952. I always look at old yearbooks, but they are usually priced $10.00 each or more at sales. These were $1.00 each, so I bought them all. Not only are the yearbooks pristine, but they are chock full of extra newspapers, Sorority leaflets, commencement announcements, calendars and photographs. I have learned quite a bit about Betty. She got her Bachelor's in 1949 and her Law Degree in 1952. 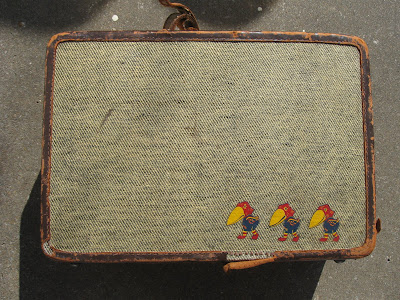 Another fabulous Jayyhawk item was this fantastic old suitcase that I saw on a top shelf several times over the course of the two different days that I was there. It wasn't until I was about to leave the last day, that I pulled it down to look at it and was very pleased to see the 1920's Jayhawk mascot printed on the old suitcase. It is fantastic. It is worn and old, but isn't that what makes it truly cool? 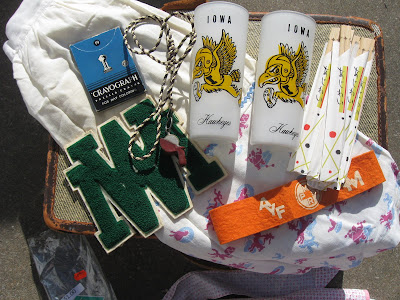 Betty was the President of the American Camping Association when it first began. She authored many books on outdoor recreation (which explained the lack of crafty, baking, holiday items and the over abundance of skis, croquet, tents, tennis and golf equipment in her house). I bought the books that she wrote along with her whistle, her felt ACA felt headband and a few other personal items of hers. The WM is a letter form William and Mary University and belonged to a woman named Dorothy Harris who was an advocate for Woman's sports and has an endowment named after her. Betty wrote one of her books, "A Leader's guide to nature Oriented Activities" while at Iowa State University - hence the Iowa Hawkeye glasses. I bought eleven of those. Everything is pictured on a great old apron made of a feedsack. The old chopsticks were just plain fun. 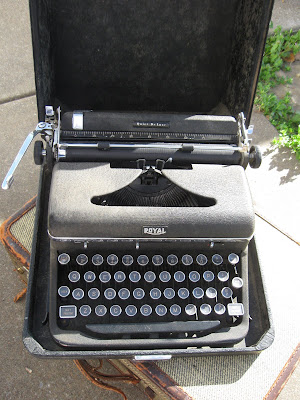 The Bean pulled out this great old typewriter with glass keys from under a shelf. I was amazed no one else had spotted it until late Sunday afternoon. I know people take them apart. I know people like the keys. But, I love old typewriters and just don't think I can destroy it. I have one just like this already, so it does need to be sold - intact. 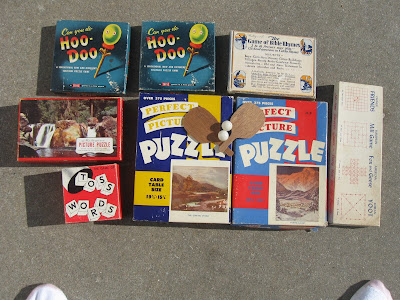 Games, games, games.....and my feet! Such a lame photo. All of these great old games and puzzles were only $1.00-50¢ each. Love the HOO DOO box graphics, don't you? That tiny little ping pong set is stamped JAPAN on the back. All of these items were used in Betty's outdoor recreation

I spotted a gorgeous old Simtex tablecloth on Friday for $8.00. It was under a pile of other table linens that did not interest me. $8.00 is more than my budget allows for tablecloths because I don't need any more tablecloths. But, I love them! I will admit, that I did put it back under the pile of other linens and hope it might be there on Sunday for half price day. 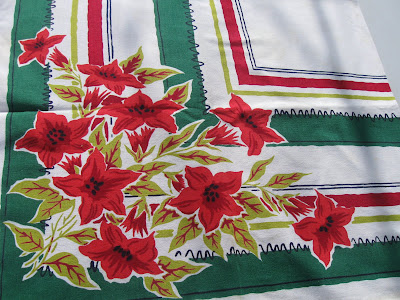 It was! $4.00 is more in my budget, although I rarely ever spend more than $1.00. But, this one is a beaut and well worth the $4.00. I am amazed it is in such nice condition. I have the feeling Betty might have thrown it on the ground by a fire while she roasted wieners for the campers.

Sunday I ventured into the closet for the first time. That is such a personal place and to rifle through drawers just seems wrong. I mentioned this aloud and a lady that was working there said she used to feel the same way until someone told her, "you are not your things. You still existed with or without your things". I suppose those are wise words. But, watching a man rifle through her undies made me nervous.

Between the journals, some paperwork in the journals, the yearbooks, the books and the information that the Estate Sale guy told me, I have put this little biography together about Miss Betty. She was a lawyer in 1952, a world traveler, she saved everything forever, yet it was all incredibly clean and well cared for. She had only lived in her new home for three years, so she carted all that old stuff with her from home to home.

I found this tribute to her online. Betty was a frugal person. Some of her habits later in life reflected the dust bowl and the depression in which she grew up. When she relocated she moved paper cups and paper plates and used tin foil. More than once she moved a 32 oz plastic McDonald’s cup which she used even up to the week she died. She used paper towels and dried them on the sink to be used again. If we sent something over in a zip lock bag, the zip lock bag was returned. She loved her tea, the secret is to get it hot enough, 2 minutes, and she would dip the tea bag 5 times and would use the tea bag 2 times, and sometimes she would proudly get 3 cups out of it. But while she was frugal, she was also generous. I watched her sit and write a pile of checks one Christmas to charities, something she did twice a year, giving away literally thousands of dollars. She loved flowers, chocolate, black licorice, and going out to dinner. She loved nature and pictures and had more pictures than she had wall space. She collected owls and people bought them for her, resulting in a collection of thousands, all quite unique. She loved giving – if you said you liked something, she never forgot it.

I've enjoyed learning more about this interesting lady. I know it's true that everyone has a story. It would be nice to know every person's story before they died and before we are able to go through their belongings. But, if we can't know their story then, it's nice to know part of it now.