I mentioned that our little girl kitty Little Lady had a seizure back in October. She has now had a total of four seizures. She had one tonight. It is just the scariest thing to see. It scares us all to death. She bounces right back, but it is just terrible when it happens. Two days ago I noticed she was squatting in her litter box and trying to go pee, but not having luck. She went from one litter box to the other, back and forth, back and forth. I really thought that this along with the seizures meant something really bad was happening. I got her into the vet yesterday and he said it was just a Urinary Tract Infection - not uncommon and treatable with a new high dose shot that just came available. 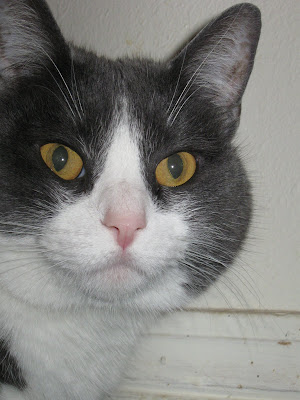 I asked him about the seizures and he said that she probably has Epilepsy. And, that, if it was his cat, he would just let her have the seizures and monitor them. He said if she had several a week or even every day and if they lasted hours, then we would need to do something to help her. She's only had four in about three months and each one only happens when she falls asleep into a very deep sleep and they have only lasted less than a minute. It seems like hours, but it is really less than a minute start to finish. As soon as she shakes her head like, "that's it," she's off to her food and water bowl and then back out in search of a toy. And, until her next one, which might be tomorrow or a month from now, she is absolutely fine. I will get the results from the Vet tomorrow that it is definitely a Urinary Tract Infection. But, I can tell that the shot is working because she is not in the litter box anymore and she is acting like herself. It's hard to see something you having problems and not be able to help them. She is just the sweetest cat and I have a bond with her like no other cat I have ever owned. 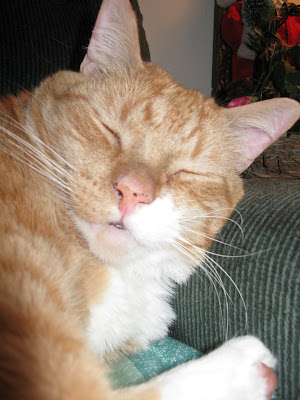 That's not to say that I don't love my other two cats. I do. I really do. It's just that Little Lady has needed my attention lately. I'd love to show a photo of Tiger looking all alert and full of energy. But, that ain't gonna happen. This is how we see him 99% of the time. In fact, as I write this, he is asleep on the couch in a bed I made for myself complete with a quilt and pillow. he even has his head on the pillow like I made the darn bed just for him! 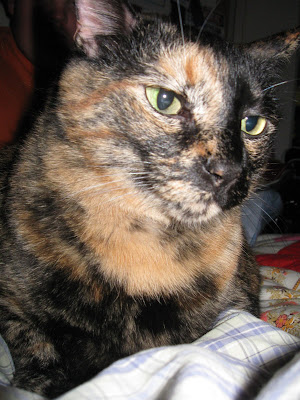 Here's Pity, doing what she does best - getting ready to go to bed. I swear to you, she can tell time. At exactly 10:15 every night, she comes into my office (aka THE JUNK PIT) gives me a very loud "MEW" and runs to the bed. She knows when it is time to go to bed.

It's amazing the love we get from our pets, isn't it? What we would do without our cats and dogs and birds or whatever fuzzy cuddly or even scaly and slimy pet you may have. Thank you for your love, kitties. Even you Tiger, who really only loves Daddy.