Yesterday I got to dig in some junk - just like I had been craving to do for a few weeks now. Unlimited amounts of boxes of junk - cool vintage things, weird things, old stuff, some new stuff, an eclectic mix of junk. I was amazed at what I found! I was even more amazed that all this junk was in my very own home. Yikes!

Since we were home watching the Inaugural festivities all day, I decided to tackle some of the boxes in my so called "Office" (aka "The Junk Room") that had been in the depths of the closet for longer than I can remember. When I first started thriifting for ebay items, I bought vintage things and packed them away until I got them listed. Then something terrible happened - I found out that I liked, no, make that loved, all things vintage. So, selling my finds became less likely to happen and I kept more and more. Ooopsie. I know that none of you have ever done this....
I have way more than I can ever list and sell or keep, so the sorting has began. I was super excited to find some goodies in the closet - so excited that I didn't even mind donating the five tubs of off casts that I decided were not worthy of selling or keeping.
Here are the goodies that I found that I had either forgotten about or have no recollection of ever having bought. Sad, eh? 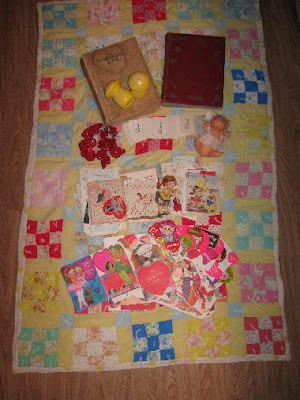 A super sweet child's quilt - all hand sewn and hand tied. Adorable! It has the name "Bobbie" written on the back. 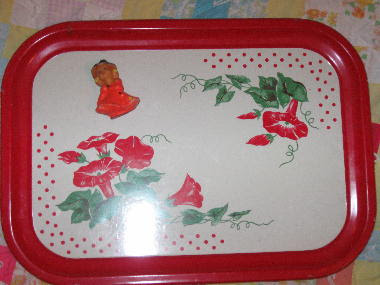 A set of four neat old red trays. I will keep the best one and donate the others. And, a tiny Gurley witch candle. I had forgotten about her - but now I remember that there were three of them when I packed them away. So, surprises still await! 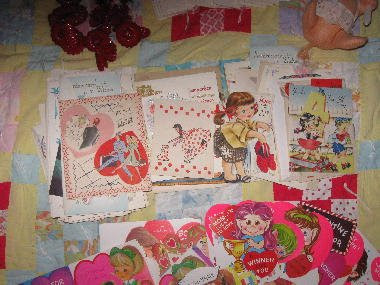 A huge bag full of vintage greeting cards. I adore vintage cards from the 1940's and 1950's. I like to look at the graphics and read the cards. I never use them or destroy them - I just like to admire them. 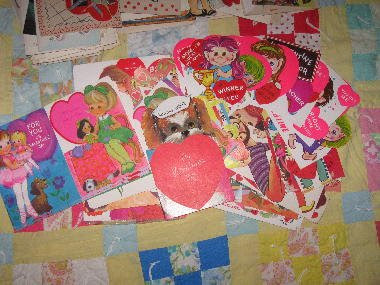 I have spent a great deal of time lately perusing Etsy and ebay looking at vintage children's Valentine's. I hadn't bought any, because I didn't need them, but I really wanted some. Well, surprise, I found a big bag full of Valentine's too - all to the same Teacher from her students over years, plus cards from her sister and husband. So sweet. Does anyone recognize those troll-ish looking characters on the cards on the right? 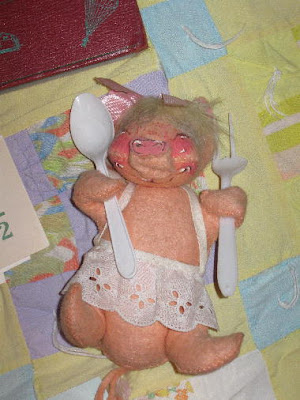 Yes, an Annalee pig. Can you believe I found an Annalee in my very own stash? I remember buying these (there is a boy waiting to be found yet) and not knowing what they were, so I packed them away. Now I know. And, now they are mine! (She needs a new fork though). 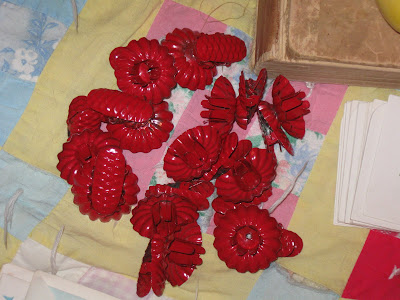 A good amount of old red candle clips for a Christmas tree. I had wished for some of these at Christmastime. Well, there's always next year! 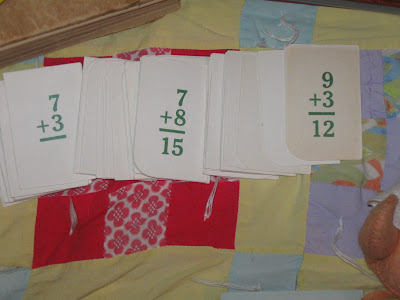 A box full of vintage Flash Cards - these are tiny - about half the size of a regular deck of playing cards. Too cute for crafting and add-ins to packages. 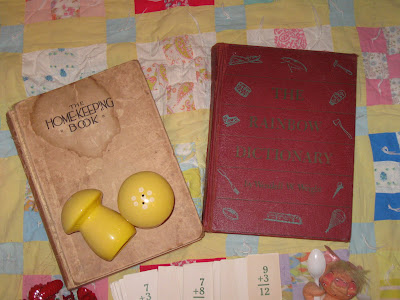 The Homekeeping Book which explains how to keep house, a precursor to Martha's Homekeeping Book. It has useful things such as what cuts of meat come from which part of the cow, how to pickle, proper methods for washing floors and so on and so forth. The Rainbow Dictionary has sweet graphics. I probably bought it to use in Ephemera packets, but I just can't destroy it. It is too sweet just to thumb through and look at the graphics. And, a set of toadstool salt and pepper shakers. Yellow isn't really my color, so these may be gifted soon.
So, I dug in some junk, found some treasures, got rid of a bunch of things and never even left my own house. Sweet!
I'm off to the Mall (yes, I said the Mall) to try to get in on the free cosmetic settlement, then off to our first Unified Volleyball practice of the year. The Coach is super sweet to us and still lets The Bean play even though it is a school function and he is homeschooled.
Have a good day!
Posted by Shara at 9:12 AM