An ice storm moved through Tuesday morning downing electricity to over 100,000 people. Our power went out Tuesday at noon and much to our delight and approval came back on again at about 6:00 tonight - Thursday. It is like a war zone outside. There is not a tree left intact. I have never witnessed the things I have seen and heard. The noise of a tree breaking is a noise I will not soon forget. The first night in the dark and cold was absolutely terrifying. Tree upon tree cracking, breaking and falling. Outside our house we have two of the largest trees on the entire block. The one out closest to the street was the first to fall. It lost one branch that fell across the street. I called 911 to report the down limb was blocking the street. A downed limb doesn't sound as bad as it was, it was a 200 year old tree and that limb was as big as a full grown normal tree. It took five firemen with as many chainsaws to cut it up and make a path wide enough for one car to pass. After they left, our tree started losing branches. One by one, they came crashing down through the other branches, dropping ice like shattered glass on everything. We held our breath waiting for one to crash through the bay window or through the roof, but it never did. Actually, one did poke through the roof, but it is hopefully minor and can be fixed easily and inexpensively. The whole street, town, surrounding towns and counties are in a State of Emergency. The Red Cross and FEMA are enroute. The grocery stores are open for awhile,t then the generators go down and they have to shut down. It is like something out of a movie - literally hundreds of cars trying to get into and out of the parking lots. The gas stations are lined up ten deep per pump. The few fast food restaurants that are open are packed with people eating and trying to stay warm. Yesterday Chick fil A had lines of power strips out for people to recharge their cell phones, laptops and DVD players. Everyone is really nice and looking out for one another. My neighbors not more than thirty feet away have had power the entire time (A particularly hard pill to swallow for a certain Bean) and have been bringing me coffee and charging our appliances too. They have fifteen people staying with them right now too. This is Arkansas - we are not prepared for ice storms. We had several big candles and a few flashlights, but that was it. We are in an all electric home, so no heat, no hot water, no cooking. We ate up the peanut butter and some bags of donuts. Pretty healthy, huh? We were about to start eating cans of cold vegetables. Which we could have easily done, but I am happy that we didn't have to do that after all. I am so very happy that everyone in my family had phone service the entire time or I would have gone bonkers worrying about everyone. My Mom is still without power and she is in a very rural area, so it may take some time.
I leave you with some of the over 400 photos I have taken so far. 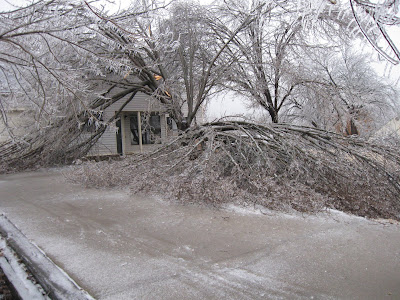 House at the end of my street. Even more sadly is that the poor people actually just bought the house and moved in today. No power to boot! 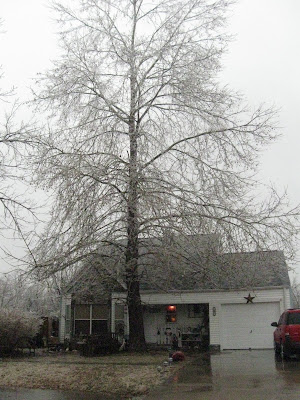 Our house and tree BEFORE it hit. See the lovely ELECTRICITY coming in from the window. It went out about three minutes after this photo was taken. The tree is still standing, but pretty sparse. 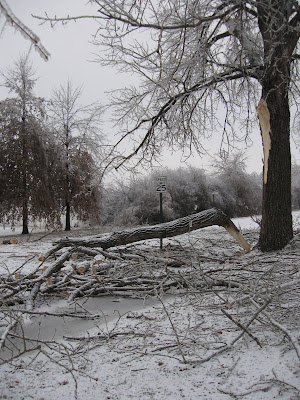 The "limb" across the road. Such a mess to clean up everywhere. 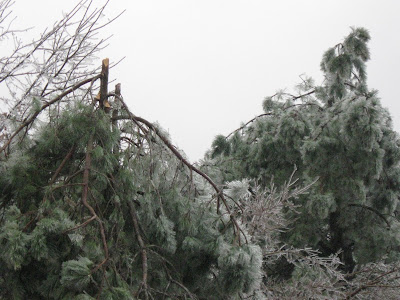 Trees across the street from my house. 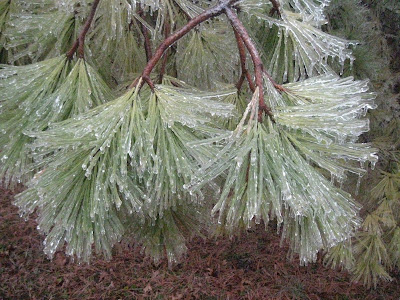 Even in the destruction, there is beauty. 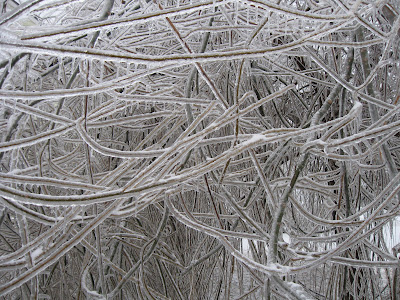 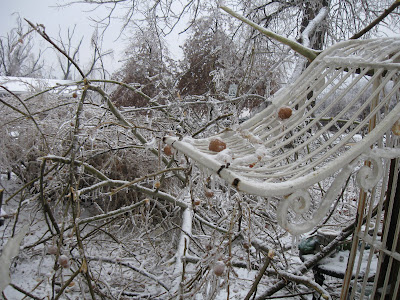 Side view of our yard. That "was" a wrought iron archway. It is now crushed. Not of that stuff should be in the yard. The privacy fence is crushed too. 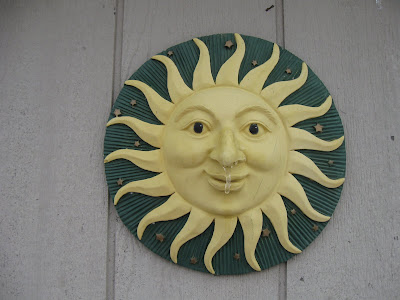 Even the sun had a snotsicle. What a few days this has been. We have power, but there is along row to hoe getting stores back open, schools open, jobs up and running. Food will be short due to the massive power outages. It is pretty scary - nothing I have ever dealt with and hope to not deal with again. Thank you!
Posted by Shara at 8:14 PM