I've been reading on a lot of blogs that the yard sale season is drawing to a close. But, around here, the yard sale season gets very busy from now until it gets cold. I love fall yard sales - first one there, digging through boxes wet with dew, hands cold so you can't feel them, but you just keep on digging. These are the sales where people clean house, dump out the barn, clean out the outbuildings and let it all go. Not just a tarp full of clothe,s books and kitchen stuff. Good stuff. Lots of good stuff! Generally the last two weekends in September and the first two weekends in October are prime yard saling weekends. Today was no exception. 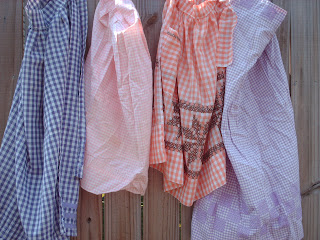 Four gingham aprons - 25¢ a piece for two and the other two were in a big box of assorted linens for $1.00. I bought the box just for the aprons, but found some other goodies in the box when I got home. The pink one needs a good long soak in the Oxiclean, but I think it will come out fine. I decided to only keep and collect the gingham ones, and lately that is all I have found. I just might get a collection as good as Linda! 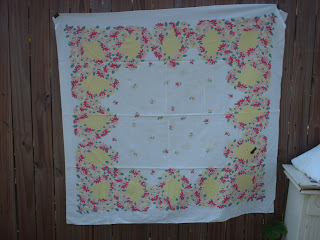 I commented earlier in the day that I hadn't found a tablecloth in awhile. I found this one a bit later for $1.00 and was very happy to have found it. It has a small hole in the middle right, but not so bad that it bothers me. I bought two, but the other one turned out to be more faded that I first thought. I have a rule that if a tablecloth costs less than $1.00, I buy it without unfurling it and risking grass or oil stains in the driveway. I am usually lucky and the tablecloths are in good shape. This one has such bright colors, that I don't mind the hole. I just strategically fold them and stack them up so you can't see the hole anyway. 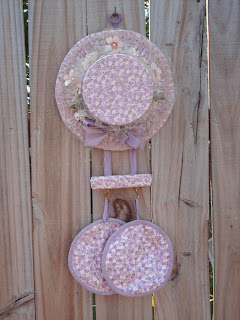 I thought this potholder hat with potholders was funny for only 50¢. It's made out of some sort of old cardboard packaging and has great old millinery flowers on it. 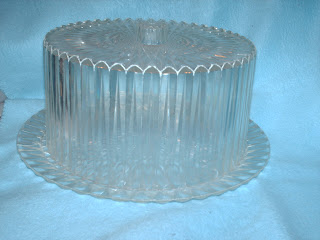 This Lucite cake carrier was $1.00. It was my first buy of the day and I was eager to buy some vintage junk. I bought it without looking at it very closely and didn't notice the small crack in the base. Not so bad it isn't usable, but bad enough I probably won't be selling it (which was my intention). 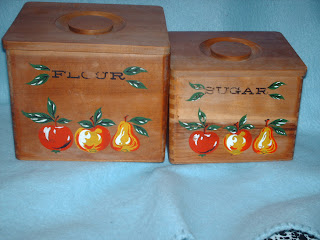 A wooden FLOUR and SUGAR canister set for $1.00. I like the fruit motif, but they are for resale. 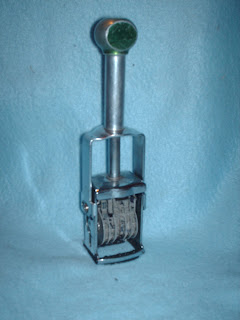 An old Garvey pricing tool. I had coveted the one that Heidi found back way back in March, so I was very happy to find this one today. This is what they used in the grocery store to price canned goods and other items back in the day. My dad worked in the grocery store and I always heard the chu-chut sound of these pricers. I have some old jars I keep my four and sugar in and they still have the purple prices on them from a marker like this one. I buy so much old stuff that it is nice to find an item that has special memories for me specifically. 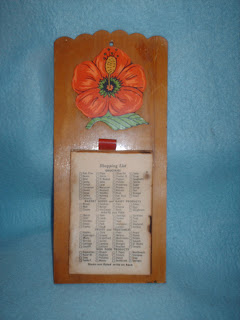 An old wooden shopping list for 50¢ with staples such as Lard, Doughnuts and Cigarettes on it. Mmmmmmmmm...Good! 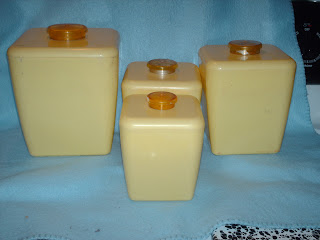 Yet another canister set - all yellow and only $1.00 for the set. Once upon a time they had flour, sugar, coffee and tea on the fronts, but it is mostly faded away. I still think they are neat and will make good storage. 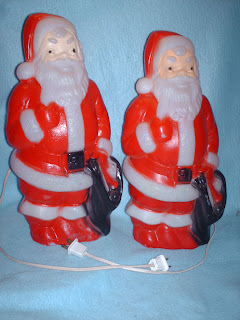 Two tabletop blowmolds for resale. I asked how much they were and the lady said, "Oh, those are Mama's, I'll ask her." "Mama,how much for the plastic Santa's?" "The WHAT?" "The plastic Santa's." "Where?" "The ones on the table in the driveway." (Where most yard sale items generally are, as a rule). "Oh, those," Mama said. Que the Jeopoardy theme song while she thinks and thinks. Then she said, "A quarter." The daughter said, "Mu-other! Those are OLD!" Then Mama looks me square in the eye and says, "A quarter each." Whoa, back up Grandma, that's too much. She was happy with her 50¢, but the daughter was not. 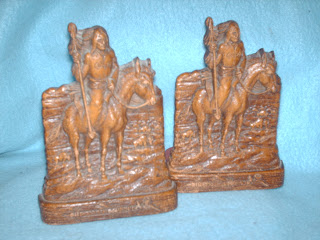 A pair of really cool old Orna-Wood bookends for $1.00. Not sure if I will sell these or use them in The Bean's room with his other Native American things. 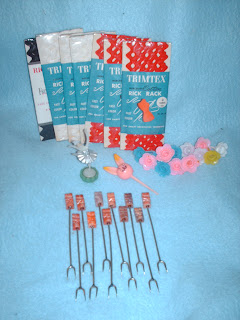 Nine packs of vintage rickrack (two not shown because I found them under the car seat after I took the photo), a ballerina cupcake topper, a bunny cupcake topper, a handful of old candle holders for a cake and a set of marble Tiki cocktail picks - $1.25 for everything. 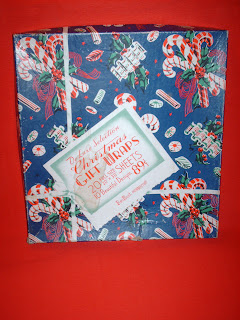 I found this great old Christmas gift wrap box in a suitcase full of old sewing patterns. The sewing patterns and the suitcase were $10.00 for everything. I asked the lady at the sale if I could take the patterns out of the box, put them back in the suitcase and just buy the empty box. As I asked this, about seven people were shopping and they all just stopped dead in their tracks and looked at me like I was a complete doofus. An empty box? Why would she want an empty box? The lady having the sale who has flea market booths and knows her stuff looked up at me and said,, "Oh yes,that is a great box!" Everyone went back to their shopping. I suppose they decided it wasn't such an odd question after all. The red in the background is a big roll of wrapping paper sized crepe paper. It was in a big pile of new-ish wrapping paper for 50¢. I asked if I could buy the one roll for 50¢ and leave her the rest of the pile to sell to someone else. She understood, but once again, I stymied the other shoppers. 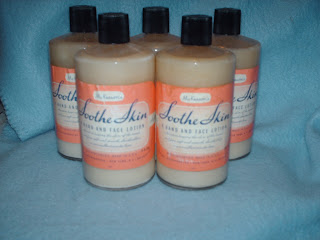 I really don't know what I will do with this, but it was only $1.00 and I had to buy it. A full case of McKesson's Soothe Skin Hand and face Lotion from the 1940's. The box even has the Santa Fe Railroad tickets attached to it. There are twelve bottles and they are all full and it still smells good, although I wouldn't actually use it. The bottles are glass, so the case is quite heavy. It's just neat, don't you think? Why didn't it sell? Where has it been the past 70 years?
Tomorrow we are going to the Sorghum Festival. Last year we stood in line for half an hour waiting for our first taste of freshly made sorghum. Well, that's half an hour we'll never get back. That stuff is nast-y. Blech. But along with the sorghum there is square dancing, clogging, fiddling, a Dutch Oven Cook-Off and free tasting, butter making, a tractor show and all sorts of other slightly hokey Ozark-y things. I am not a fiddlin', cloggin', square dancin' gal, but I think it is fun to watch for an hour a year. That's about long enough. New to the festival this year is a flea market. Hmmmmmmm.....
Posted by Shara at 9:24 PM