Back to the Beginning

When I started this blog, I called it My Deal of the Day. I wanted to chronicle some of my deals that I get at the grocery store and other stores. Well, that got rather boring after a while and I started chronicling my thrifting stories and that took over the old bloggity-blog. So, in honor of the original idea of this blog - here are my Deals of the Day: 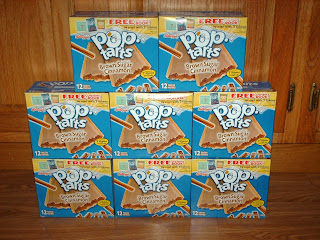 Eight boxes of Pop-Tarts at 50¢ a box. Plus there is a form on each box for a FREE book with two proof of Purchases. So, that is four free books on top of my already good deal. (But, you know it will get even better before I am done). 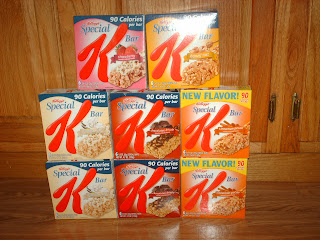 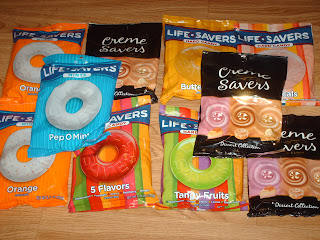 On to Walgreen's for my next deal. This week Life Savers are Buy One Get One Free. I had six coupons for Buy One Get One Free, so that made for twelve bags for free. When I checked out, three of the coupons came off fine, but the other three didn't. I paid the checker, but she asked for a manager to see why the other three wouldn't come off correctly. Actually, I knew why, Walgreen's prices are so random that it messes up the system. One flavor rang up $1.99, then the free one was free. One flavor rang up $1.00, then the second one was 99¢. Another one rang up $1.39 and the next one was free. Each flavor had a different random price. After ten minutes of the manager taking my coupons and receipt and leaving the front end, he came back and told me that under no circumstances where those valid since they were already Buy One Get One Free, so I couldn't use them. The register had taken off the first three fine, so obviously it would take them. He did say that I had been overcharged 50¢ (Not sure how he decided that), but made no effort to give me my 50¢. He was talking to me like I had tried to pull a fast one or down something wrong, so I just really didn't feel like pushing it or making a big deal out of it, so we left. I like to feel good about my deals, not guilty. The other six that I didn't have a coupon for were Buy One, Get One Free, so I only paid about $3.00 for all twelve in the end. And, probably, just to prove that I did no wrong, I will take the other three coupons to my Walgreen's (I should have gone there in the first place) and get six more bags for FREE. Trick or treat candy for free at my house.

So, that is probably more than you ever wanted to know about my Deal of the Day. If you want a snack or some candy - come on over. We are all set.

Tomorrow I am going to a Church Rummage Sale and an Estate Sale. The Estate sale is in a teeny town up the highway. The ad says that the poeple lived in the same house for 50 years and everything must be sold. Most Estate sales around here are just big yard sales. Not the high priced Estate Sales run by companies. There are a few companies around here that do hold high priced sales like that, but I usually only go to them to see fancy-schmancy houses and never buy anything. The sale tomorrow sounds like it could be a good one. I don't need a bunch. Just a treasure or two to make my day!