You Say Potato, I Say "What the Heck"?

I was pretty much home all week with The Bean and his flu ickiness. My only real trips out of the house were hurried trips to the grocery store.

Okay, I may or may not have driven past the grocery store to the thrift, then sent back to the store. But, that is just between you and me. I felt kind of guilty heading to the thrift with the boys home, but they can manage for a few hours, right? Besides, I am a grown woman and that was the first time since September 28th that I have been out of the house alone. Sad, eh? I must admit that have grown accustomed to having the Bean as my sidekick and really didn't enjoy being out alone.

Let me preface this first story by saying that I am about the pickiest produce pick-er-outer on the face of the planet. Like it says in my About Me - My Dad was in the produce business for over 30 years. He taught me how to thump a melon, pluck a pineapple leaf, smush an avacado with my thumb and sniff a peach to get the best stuff for my money. Now, before you think I was raised on fresh produce, I will let you in on a secret. My dad brought those "monkeyboxes" home every other night and we ate that same moldy squishy fruit and vegggies that the monkey ate too. My Mom pared it all into wonderful healthy food, but I learned to avoid mushy apples,pithy oranges and yellowed brocoli. Therefore, now that I am the chief grocery shopper I am super duper picky about buying really fresh perfect produce. I will pick up fifteen cucumbers before I pick out one. I really, really check it out before I buy it. Really.

Okay, so, potatoes were on the list last week. I always pick up several bags and give them a heft to make sure I get the heaviest one (You know they don't all weigh 10 lbs., right?), give the bag a looksie to make sure there are no mushy or rotten ones and make sure none of them are wet - that makes them rot incredibly fast. I also read a newspaper article last summer about a lady that bought a bag of potaotes and there was a snake in the bag when she got home. So, now I have to make sure the bag is snakeless too! But,one thing I never thought to make a point in doing is "look for rocks". 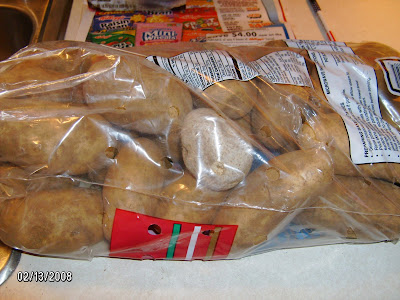 Imaigne my surprise when I threw the bag in the back of the car and saw this. Do you see the rock? Well, I didn't until then. 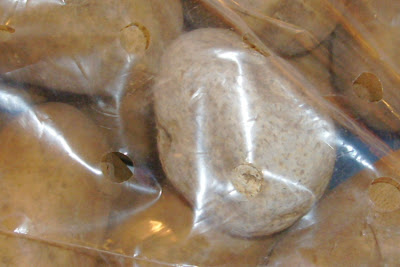 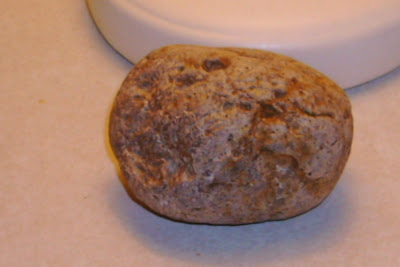 But, it's not a potato, it's a rock. I planned on taking the potaotes back to the store, but The Bean and I concurred, the potato rock is more fun to keep than return.
~~~~~~~~~~
My second big story of the week is grocery store related too. (I didn't get out much, I say!). The local IGA has Kellogg's cereal on sale 2/$6.00. There are coupons on the boxes for $4.00 off four boxes and an in-ad coupon for $4.00 off four boxes. $12.00 for four boxes minus $4.00 on the box coupon minus $4.00 in-ad coupon makes it 4/$4.00. $1.00 a box! So, I bought 16 boxes of cereal. The Bean eats cereal pretty much everyday, so why not stock up at $1.00 a box rather than buying it a box at a time at the regular price of $4.89 a box? Plus, on the back of the boxes are forms and tokens to get free DVD's and a Hot Wheels watch. Not bad, eh?
~~~~~~~~~~
Valentine's Day is just a faint memory around here. The Valentine tree was stripped down yesterday and the bunnies and chicks are waiting their place on it next. I already started making Easter crafts tonight. I swear, I am always making something lately. I'm not sure what has gotten into me. 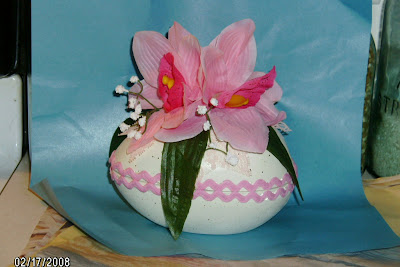 These aren't really my decorating taste, but I think the first one turned out pretty cute. Actually, it's easier for me to make things that aren't really me because then I am willing to part with them. Otherwise, I want to keep everything! 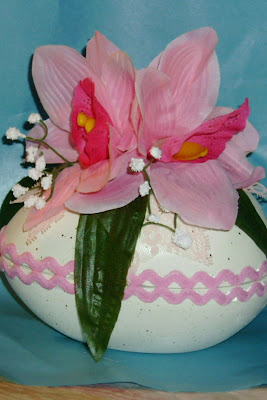 They are egg shaped resin boxes from The Dollar Tree. I had been looking at these boxes and thought they were cute, but really didn't have a good use for them. Then I saw an idea on another blog to decorate them with vintage items. She had used old millinery flowers and velvet, but I opted for a more sugared egg effect. That's vintage lace and ric-rac on it. The flowers are new, but I think they look vintage-y. I'm think it needs a pipe cleaner chick inside as an added surprise. So, do you think it is worthy of seling? Or swapping? Or trashing? I have two more that I will work on. Oh my God, I just realized something! They need glitter. Everything is better with glitter......
Posted by Shara at 9:27 PM