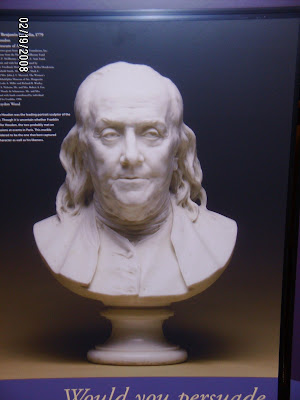 Tuesday we went to the library to see an exhibit about Benjamin Franklin. It was interesting, although if was really just photos and posters and nothing you could touch or see in person. There was a computer where you could take the virtual tour of the actual Exhibit at the Smithsonian. They only had one chair, so I went to the Children's area to "borrow" a chair for a few minutes and the lady librariaan got all huffy telling me NOT to remove a chair. Those were for the "CHILDREN". Uh, I had a "CHILDREN" with me! They were regular chairs anyway, not little teeny chairs. (On that subject, before I forget, they had restrooms in the Children's section so I decided to "go" while I was there. Imagine my surprise when all the toliets were miniature little teeny things about 14" tall. Now that, my friends, would have been a picture. Me on a 14" toilet. Needless to say, I had to go to the more Adult section to do my business. Ahem.) 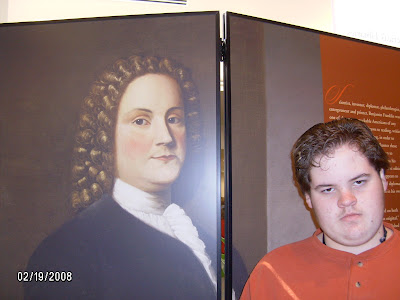 Family resemblence? I told him to look serious like Ben. He did a good job, huh?

Anyway, after the mean lady told me not to touch the chairs, I kind of got a bad taste in my mouth and we left the Exhibit. I did get some books about Cousin Ben and some info about more upcoming events like a kite building class and some upcoming experiments by a Scientist and Electrician. So, we will probably go back in a few weeks. I also wrote down the website so we can take the tour here at home or at our more friendly local library. 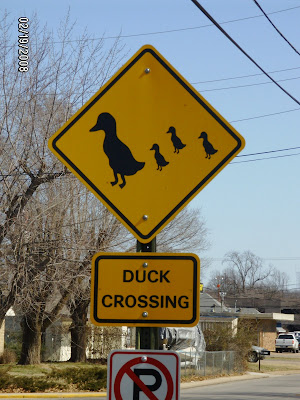 Outside the library is a large pond with tons of geese and ducks. And, apparently they can READ! The Bean was much more interested in looking at them than reading about Benjamin Franklin, and really, who could blame him. 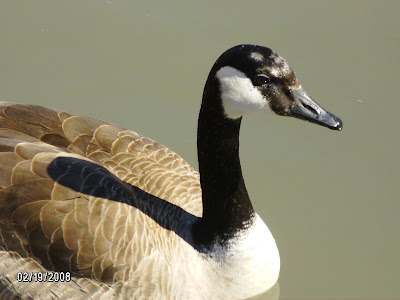 We'll study Ben at home in the books and look at the geese while we are there. Flexibility, baby. These were the tamest friendliest ducks and geese. They would walk right up to you and practically rub their heads on your hand like "Pet me! Feed me!" 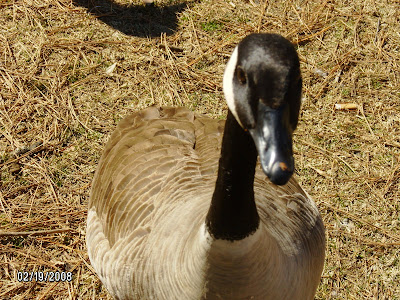 This one in particular seemed to take a liking to me and followed me around the park. 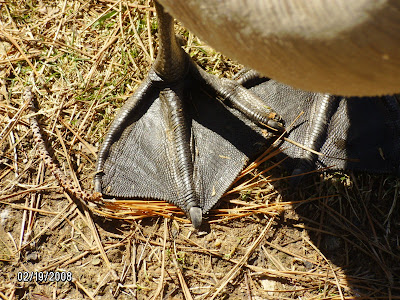 Check out his foot! Fugly!
I felt guilty that we didn't have any bread for them, but I saw at least five or six different families come wiht bread and the trash bins were full of bread bags. So, me thinks we have some happy fat ducks at that pond. 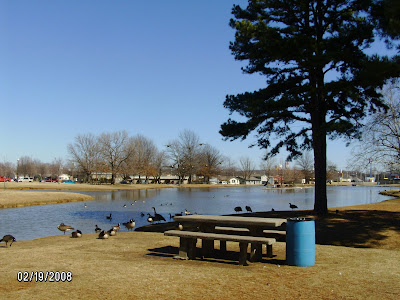 A big "V" of geese came flying in and landed right in front of us so that was interesting. If you click on the photo, you can see the geese coming in for their water landing. It wasn't anything I had ever seen at close range before always in the distance and way up in the sky. There was quite an altercation involving two big geese and a little white duck. The funniest thing that happened was tha a lady came to walk her teeny tiny little fluffy white poodle wearing a teeny tiny little pink sweater. He went "Yap! Yap! Yap" and every one of those three foot tall geese took to the water and got out of there. Afraid of a dog the size of a pigeon! We walked the perimeter of the pond and walked the trail while we were there. (PE!)

After all that learnin' it was time to go to a thrift! (After a trip to our very favorite resturant Taco Tico. Oh, yes, we have a delicate palate here at monkeybox. We love our Taco Tico Bean Burritoes.) So on to the Hospital Auxillary Thrift. This is a very old thrift run by even older ladies (ba-dum-dum!) The most interesting thing about this thrift is that they launder every item before they sell it. Nice clean stuff. Of course, I never really look for clothes, but if I did, that might be the place to do it. I found a piece of matte white pottery for $1.00, although now that it is home, I think it might be a newer piece and not vintage. But, I am always afraid to use my old stuff, so I can use this new one and pretend it is my old stuff. Right?

I also found this cool old metal Ajax Paper Cup Dispenser. It takes folded paper cone cups that were made by an envelope company. I think it is a fun old item. I'd love to find some cone cups for it someday. Like that would ever happen. 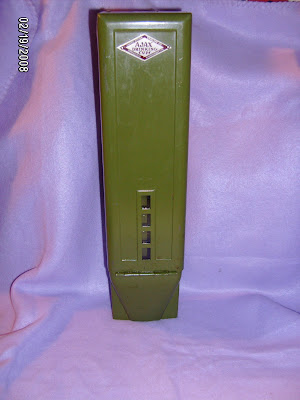 Finding this dispenser reminded me of a story about The Bean when he was about three years old. I had decided to put a cup dispenser in the bathroom since he finally had the hang of toothrushing alone. I put the cups in that afternoon. That night he kept going to the bathroom every few minutes. He was in the potty training process, but I never heard the potty flush or anything. Finally, on about his tenth trip in as many minutes, I followed behind him to see what on earth he was doing in there. That little buggar was geting drinks of water and had used every single cup in the entire dispenser. "I very thirsty!" he said. We never had those little cups again. The Ajax Dispenser was $2.00.

Oh yes, back to the thrifting. I found this stack of ten old berry baskets. I've neve seen the old wooden ones at the thrift, so I grabbed them - 10/$1.00. I think they could be crafty or at least hold my crafty crap. 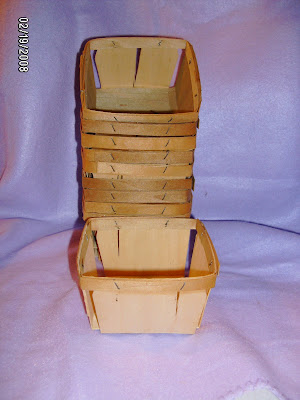 My favorite find of the day was a baggie of vintage swizzle stick/toothpick/skewers with a honeycomb fruit on each one. There are apples, pears, pineapples, strawberies and oranges. They are flat, then unfold to make the fruits. 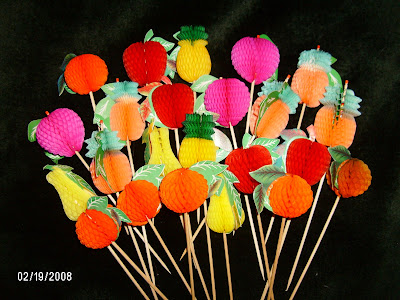 They are seriously too flipping cute for words. I don't know exactly what I will do with them, other than assemble them and just look at them for now. They just make me happy!

Pina Colados for everyone!
Posted by Shara at 9:07 PM