Yesterday The Bean had his Unified Volleyball Tournament. I don't think I had mentioned that this year, but he was able to play thanks to a wonderful Elementary School Teacher that said he COULD play even though he was now home schooled. We seriously needed to be a part of something again and not feel like an outcast. It was wonderful for him to get back with his friends and have his old life back for a short time. 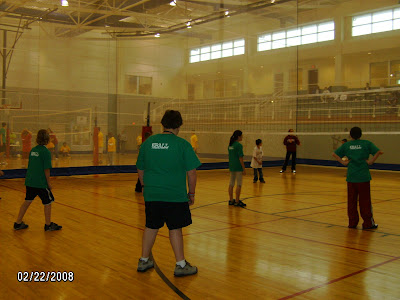 Unified Volleyball is part of the Special Olympics. There are six members on each Volleyball Team. Three Special Olympic Athletes and three teammates. It is a really great program that teaches the kids that some kids ae visibly disabled and others are not. It teaches them to respect each other, get along no matter what the odds and have fun doing it. Everyone cheers everyone else on even when the opposing team scores! 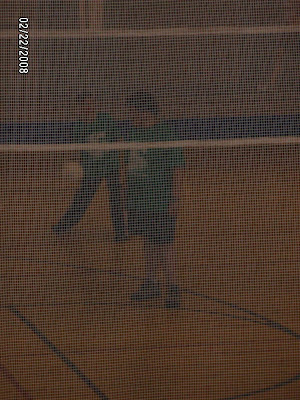 This was my view behind the net. Actually, I could see pretty well, but the net caused a reaction to my flash and made it look like a wall. So, this is virtually a picture less event. DH was a line coach. I help coach at all the practices, but at the Tournament, I am MOM and watch The Bean play and root them on. I am also responsible for the rest of the hooligans that aren't playing. They have to sit in the stands and tell me if they are leaving and why. Luckily, they all like me so they behave and we had a good time. 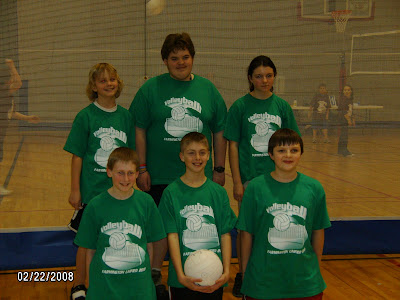 His team, appropriately named....wait for it.....The Green Team, won Second Place. Yeah! This was his third year - first place twice and second this year, so that's a pretty good record. See that girl next to him on the right? He's going to mary her someday. But, I digress. 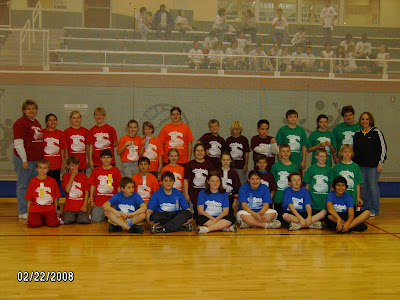 Here's the whole gang all colorized this year, tuckered out and done for another year.
Posted by Shara at 9:21 PM