On Saturday The Bean and I began our Saturday Fun Days. I had mentioned earlier in the week that we might go to an auction, but that was put by the wayside when I found out there was a local festival. We love that sort of stuff.

This is in a very teeny tiny town of less than 100 people. Yes,one hundred. They raise cane and make sorghum molasses. They have this festival every year, but it is usually ungodly hot, so we have never been before - but that all changed on Saturday. The temperatures remained in the mid 60's all day and it was glorious outside. Thee was a nice breeze with a bright clear sun overhead. 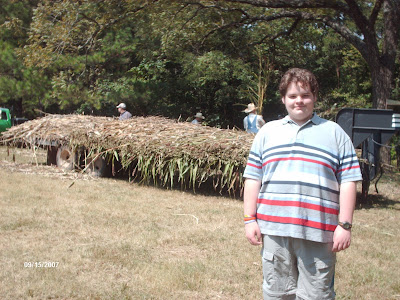 Wagon load of cane ready to be harvested. 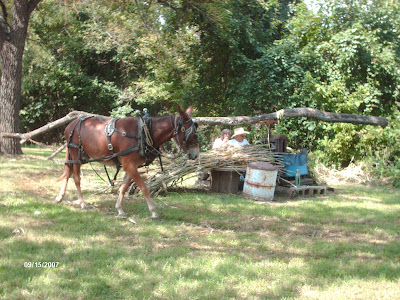 The cane is stripped and ready for sorghummaking by a mule operated mechanism.


They harvest the cane, strip it and make sorghum right there. They were lucky that the temperatures were low because the men were over this fire for hours on end. 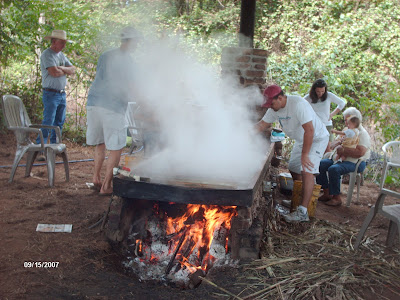 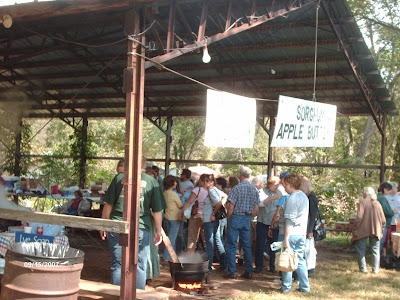 We saw a line of people forming next to the fire, but didn't know what the hubbub was about. The only way to find out was to get in line. So, we did. A few minutes later, a lady came up and asked if we were in the line to buy sorghum. I told her we didn't really know - we just saw a line and jumped in! As the line got closer, I realized people were buying the jars of hot sorghum right out of the fire. There was a sample jar on the table with popsicle sticks for tasting. (This might be a good time to mention that we had never had sorghum before). So, I dipped in and got a stick for me and a stick for The Bean. The man waiting in line ahead of us, turned as I told The Bean to try it, since we had never had it before. The man watched in aniticipation, his mouth was all set for some hot sorghum. The Bean stuck the stick in his mouth. And I stuck the stick inmy mouth. The man said, "Good, huh?" Now, I know The Bean prety well and I can pretty much read his mind. And, in his eyes I could tell that he wanted to spit that sorghum out of his mouth, but he knew tht would be rude. Instead, he just had these big huge eyes looking at me like, "Help me". At the same time, I had tried it and found it to be one of the most offeensive foul tastes I have ever had the "pleasure" of trying. The man's eyes sort of fell when he realized that we didn't like it. Then he said, "Well, it is sort of an acquired taste. It'd be better on a hot buttered biscuit." I politely excused ourselves out of the line and let the people behind us have our spot. All those poor sorghum hungry people looked like we had slapped them in the face. They loved that stuff and were waiting with slobbers on their chins waiting for a jar of it. Why, I do not know.

We made our way to the back of the field and they were having a Dutch Oven Cook-Off. Lots more big fires with lots of smoke. (Have I ever mentioned that I am allergic to smoke? Not a great place for me to spend the day. But, I am on Muscinex every four hours and getting through it!) We went along the line and looked at all the professional Dutch Oven Cooking teams. Who knew such a thing even existed!

Then we went into the old college from the 1800's and looked at a quilt exhibit. Then we visited the gift/craft shop where everything was 25¢. Seriously, I swear, these deals just find me. I found two pieces of tree bark that had been painted to look like Santa's, a Dryden pitcher with a horrific flower arrangement in it (trash time) and a few other goodies for a total of $2.00.

We went back to the car to drop of the goodies and noticed that there was another line forming near the Dutch OVen Cook-Off. Well, you know what that meant - "Get in line!" The Bean was a bit hesitant after the whole sorghuim episode, but he got in line with me. Turns out that after the judging - you get to eat all that food. For free! Give me a plate! I mentioned to the lady passing out plates that I hoped we would be welcomed back even though we had left the sorghum line. She told us that she hates it too. She said they make it bitter but her Daddy made sorghum that tasted like a Sugar Daddy - thick and caramel-y. Now, that, I could handle. We got in line and had a tasty asortment of mostly sweets as there was pork tenderloin, suasage and other meaty dishes that we don't eat. We did get a bite of chicken, a yeast roll, some walnut bread, chocolate cake, cinammon rolls, lemon poppyseed cake, apple cobbler, peach cobbler, almond cake and some other goodies. And, I mean you do get a bite. One bite of each item, so it was just on a saucer. But, it was fun and something different. The guy behind me was eating as he went along the line. With his mouth full I heard him tell someone, "That way you always have an empty spot" (on his plate). I thought that was pretty funny. 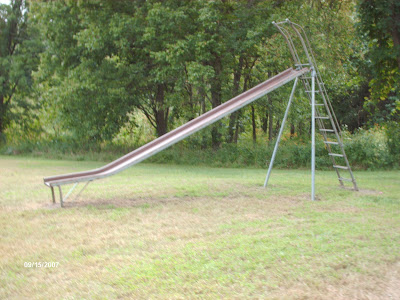 I spotted this very old slide on the other side of the college. I remember at my Elementary School we had a tall metal slide like this - I couldn't go down it on the days I wore a dress or on sunny days because it would fry your butt! They also had an old metal merry go round like the ones you push and then climb on and spin and spin and, if you were me, puke.

As we walked along we looked at the ground because we are always looking for little tresures along the path. The Bean found a perfect heart shaped rock that he gave to me. I spotted something white in the dirt and we pushed it out with our shoes. It was a piece of old ironstone pottery - just a fragment. The Bean dug up three or four pieces that were all there together. He was fascinated that the pieces all fit together like a puzzle and had been buried there for all these years and we found them and put them back together. This is so me and my childhood and life - he is following in his Mom's junky footsteps, I can tell. And, that's not so bad.
Posted by Shara at 5:13 PM