I did my first Hospitality Event for PTSA on Thursday. I had slim pickings of Volunteers and only a few of them promised to bring things in on the Big Day. I made a few phone calls to people and they made calls to other people and the word spread and thankfully, I ended up with a good amount of food. But, nearly everyone that was on my list that said they would bring things - didn't. Pretty darn disheartening. One lady that is also on the PTSA said she loved to bake and would bring a ton of stuff, so I decided between her and the 60 muffins I baked, we wouldn't need any more desserts. Well, she never came. But, then Friday morning she called to apologize - she had gotten unexpectedly ill and had been in out of it the last few days. But, to make up for it, she had taked dozens of doughnuts, dozens of muffins, gallons or Orange Juice and Milk along with plates, cups and napkins and dropped it off at the school. So, the teacher's got Breakfast out of the deal. She really went above and beyond the call of duty. But, I really appreciated it. And, the teachers ate good for two days!

On to the Junkin'. These are some finds from the past week -my favorites. 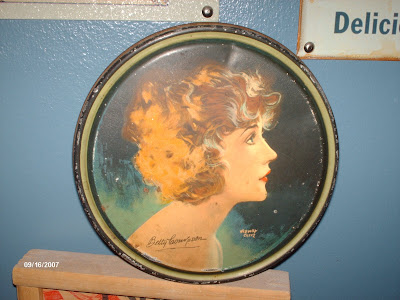 I found this very old tin mixed in amongst the fruit cake, butter cookie and popcorn tins at the Super Cheap Thrift. It says Beautibox on the bottom and the portrait of the woman says Betty Cunningham under it. I'm wondering if she was the "celebrity spokesmodel" for Beautibox. Looks like it's from the 1920's or so to me. It was 45¢. 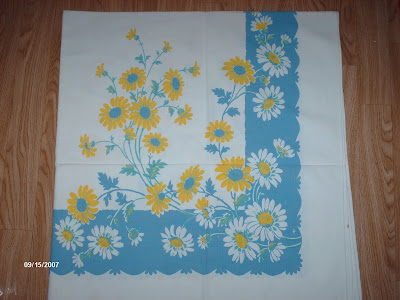 I found this tablecloth after a particulary disheartening yard sailing morning. Found it at the thrift for $1.00. It is in perfect condition. Love it!

I went to a Thursday sale this week and ofund a few old goodies and a few things with promise. 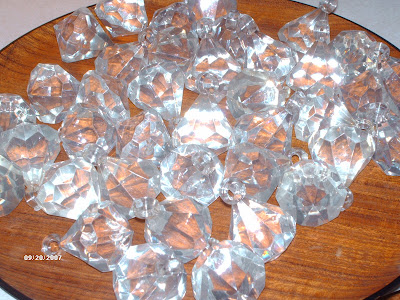 These crystals are plastic, but still very pretty. There are 38 of them and I only paid 50¢ for the lot of them. I'm trying to think of an idea for them. I know I can always hang them on the Christmas Tree, but I'd like to think of something more clever. Ideas? 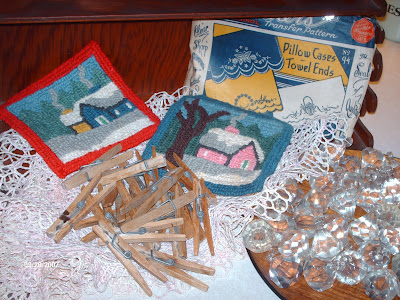 This all came from the same sale too. Two vintage hooked potholder/trivets for 15¢ each, a giant tablecloth sized crocheted doily for 25¢, 50 fabulous old clothespins with great patina for 50¢ and a set of pillowcase/tablecloth transfers for 15¢. I never got a decent picture of it, but I also got a wonderful old scrollwork shelf for $1.00. 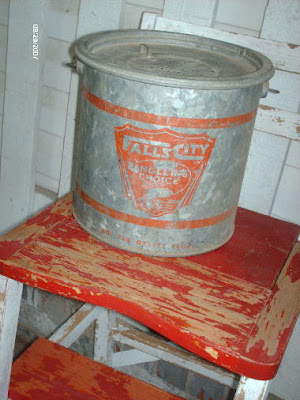 This old minnow bucket was 50¢. I am totally not a fisherman/outdoorswoman (and that is putting it mildly) but I loved the old minnow bucket for it's asthetic value - red, chippy, metal. Looks good on the old red stool too, eh?

Yesterday at one thrift, I spotted a nice stack of old sheet music. I love the old graphics. I know some people cut them up for crafting, but I just like them as they are - I have no use for them though! I asked how much and the ladies had a conference in the back and came out - "This one's a quarter, this one's 50¢, this ones $1.00, etc." I figured it would be one price for each one, or better yet the pile for a certain amount. I picked out about 10 of the best ones that were 25¢ each and told the grumpy old dude at the check out the ladies had decided on a quarter each. "Well, that's too much, I'm chargin' ya a dollar for the pile", he said. Now, that's more like it! I asked The Bean to go get the rest of them so I could play "Let's Make A Deal" with the grumpy old dude, but the rest of the music was gone. I think the ladies in the back had taken it back to buy. One of them plays piano at the Nursing Home and I overheard her saying how much the "eldery" would enjoy music from their time. At least I got the ones I wanted. 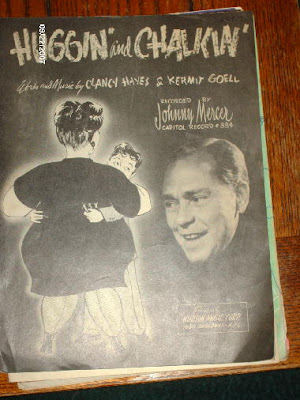 And, now I will leave you with the sweet romantic lyrics of "A Huggin' and A Chalk'" from 1946.

Oh, it just brings tears to your eyes, it's so sweet. Hurumph!
Posted by Shara at 9:27 AM