It's Snow Globe Central at my house. 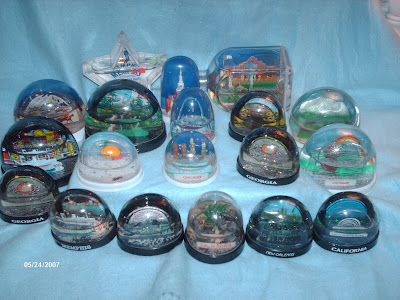 I went to the Super Cheap Thrift Store yesterday. I wasn't supposed to go, but you know how that goes. I went. In the back, I spotted a cardboard box heaped full of snowglobes. The box said 10¢ each, so I just bought them all rather than being picky and sorting them out. I ended up with 34 of them. There are three doubles, but other than that they are all from different places across the US. They are all only half full of water, but that is pretty much par for the course in vintage snowglobes. Plus, anyone that really collects them knows how to refill them. I found a lot of 17 snowglobes similar to these that sold for $87.00 recently. So, I have high hopes for them. 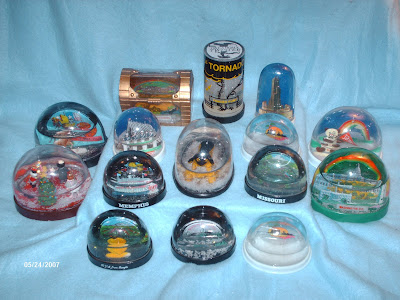 I also brought home this neat Kwick Kutter in the box. I have several of these and I use them when I make my famous homemade (Jiffy Mix) biscuits and (Pillbury) sugar cookies. This one has a sawtooth edge. I also found the old beat up aluminum colander. It is completely unuseable, but I just loved the look of it. I bet a lot of potatoes and strawberries got washed in it over the years. It will go in the "Old Kitchen Junk" cabinet. Both of these items were 15¢ each. The two matching tins were actually from a different thrift this week for 25¢ each. I bypased one since I do NOT need anymore tins. But, then I spotted the second one and had to gab them both. Made in England tins are my favorites lately. 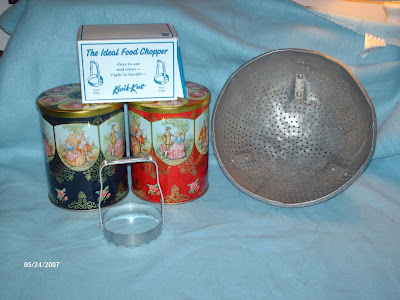 The wire basket was 45¢ and just looked way too useful to leave there. The Tyson Chef Buddy was 25¢ - I live in Tyson Country and I have a buyer for all things TYSON in VA. His name is Tyson and he will buy anything I list. He wants a leather jacket with the TYSON logo on the back, but I haven't found one of those yet. The puzzle is one of those "Arkie" things for our Puzzle Collection - it was 15¢. The small piece of green pottery is marked CP on the bottom. I just can't seem to leave a piece of pottery a the thrift even if it isn't "my" color. It was only 35¢ and in perfect condition. I do use them on my desk to hold my "junk". I nearly passed right by the blue vase. It was sitting amongst the cheapy florist green and white glass vases and I almost didn't give it a second glance. I did like the cobalt color so I picked it up. That's when I realized it was pottery - I flipped it over and it's Haeger! It still has the paper label on the bottom - It was a steal at 35¢. You can see how I get into trouble at this thrift - cheap, cheap, cheap. 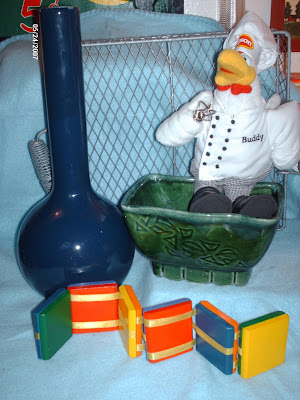 I also found this very cool and hip cigar box purse. It is covered in souvenirs and memoribilia from Vegas - dice, chips from casinoes and playing cards from casinoes. Some of the casines are gone - like the Stardust. It is covered in that heavy clear resin so it is smooth. It has a magnetic drawer closeure and a drawer handle. It is lined in black velvet and has playing cards on the inside too. There is a small gold jewelry looking thing ont he bottom that says "Heidi of Naples" on it. Not sure if that is just decor or really the maker. It came in a black felt bag that matches the lining of the purse. I suppose that is to keep it from being scratched. It was only 75¢ and it is very awesome. As I type this, I am remembering that I also bought a heavy brass lamp with a cherub on it. Hmmm, it must have rolled under something in the back of the VUE. I need to bring some things in. DH says it isn't normal to have a 1972 Pin The Tail on the Donkey Game and a blowmold Santa in the back of the car. Oh, what does he know?
Posted by Shara at 9:44 AM