I hit several sales on Friday morning. I found a few goodies, but
really, I drove far too far out of my way (especially with gas at $3.49 a
gallon this morning) looking for treasures. I came home, did a few
things around the house, got dressed and went off in search of a VFW
Ladies Auxillary Sale in a small neighboring town. This town literally
has less than 400 people in it and no one anywhere even KNEW there was a
VFW in the town. I finally found some directions that led me to the
signs. I followed them too far. I should have turned around, but I just
kept on driving. When I finally got there, I could tell from the road
that it was a bust, but be damned, I would go and I would find something.
The ladies were very nice and tried in vain to sell me boxes of stuff
that I did not want or need including home baked cookies and brownies. I
did buy an old yellow splatterware teapot with lid. It is out on the
potting bench with some pink petunias in it already. I also bought
something I never thought I would buy. A bedpan. Yes, a bed pan. It is
an old white enamel one with black trim. I will most likely plop a
petunia in it and throw it under a tree for my own amusement. I passed
by an old house today that had a yard full of old stuff in it. They had
planted flowers in all of it like I do and most of it looked lovely. I
say most of it, because plunked down right smack dab in the middle of the
front yard was a toilet. Yes, that's right. A toilet. And in that
toilet was a bunch of flowers. I thought to myself, "How tacky. How
absurd. I would never put a toilet in my yard." But, apparently, I will
put a bed pan in my yard. Go figure. 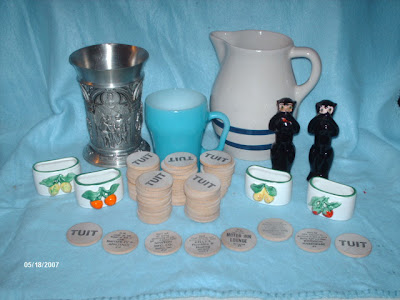 I did find a few goodies. Not too much, but I suppose that is a good
thing as I have a house full, a garage full and a storeage building full. 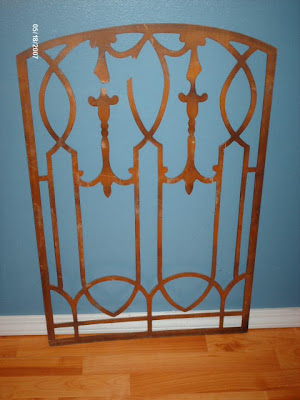 I did find this neat old wooden piece from an old china cabinet. It was
only $1.00. I like the architectural detail of it. It is broken in two
spots, but I think I can either carve it out on the other side to even it
out, or hang it on the wall and then hang something over it, like a
picture or some decorative plates so the broken part doesn't show. Hmmm,
how would a bed pan look hanging on there? 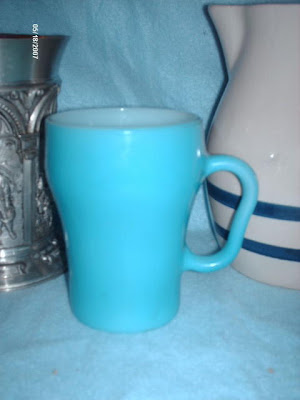 I got this old Fire King cup in an unusual style for 50¢. When I picked I
up, I just knew it would be perfect in Heidi's kitchen window . It's not
like Heidi lives across the street and I can just run over and give it to
her, right? She is in Colorado for pity's sake. But, it would look good
in that window! The Ransbottom pitcher was 50¢ too. I have several
Ransbottom blue banded pieces. I used to work at a store that carried a
line of Ransbottom pieces at affordable prices. I even have the big five
gallon stoneware drinking dispenser. I got it for $1.00 because the
spicket leaked and someone returned it. I put a new washer in it so it
is good as new. But, really it just sits on top of my old wardrobe for
decoration. 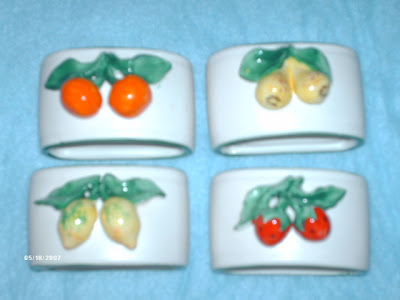 I digress. What else is new. The metal tumbler is from Germany and will
require some investigating and research. It was 50¢. ( I sense a theme
here). The napkin rings are porcelain and marked JAPAN on the back.
They are perfect - not a teeny chip or anything. Hey, guess what - they
cost 50¢ too. And those monkeys are marked JAPAN on the bottoms. They
are cold painted so I have to be careful with them. Yep, you guessed it
- 50¢ for the pair. 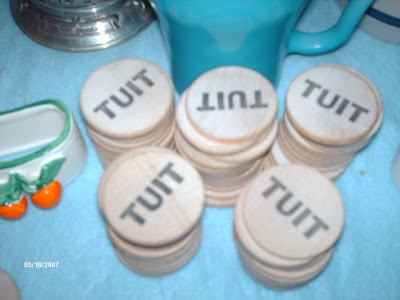 And lastly, the large supply of TUIT's. You know
about these, right? A round TUIT. As in, "When you get around to it,
will you please paint the fence?" So, you hand someone a round TUIT. ha
ha Lame 1950's humor. I paid 50¢ for a bag containing 73 round TUIT's.
I think I am set for awhile. But, I broke a rule. I added some TUIT's
to my "Junk Swap" box. I didn't buy them for the box, but seriously, I
had 73 of them. I could spare a few.

On a different noote: You might remember I mentioned Mr. Bun-Bun living in my yard. Well, my "not so bright" family likes to go out and sit in the new old glider (I
painted it pink by the way) and watch Mr. Bun-Bun frolick in the yard.
One night DS (D as in Duh) would remark, he looks smaller tonight. Then
the next night, DH (D as in Duh again) would say, "His ears look longer
tonight." When we came home today, Mr. Bun-Bun was sitting behind my
Forsythia bush. We snuck in the front door so we wouldn't scare him
away. When I went to the bedroom, I looked out the window and there sat
Mr. Bun-Bun. "My, what a quick hopper Mr. Bun-Bun is," I remarked in my
own "not so bright" way. When I went back out to the kitchen, I looked
out and Mr. Bun-Bun was sitting in the ditch. "Wow - what a hopper", I
thought. So, I went outside to see him up close and there was Mr.
Bun-Bun Number One siting by the ditch, Mr. Bun-Bun Number Two still
sitting behind the Forsythia and, when I went to the backyard, there sat
Mr. Bun-Bun Number Three. Holy Mackaroley, I am up to my carrots in
bunnies.
Posted by Shara at 9:51 AM