Yesterday I went to an outstanding Estate Sale. It was being run by the family members and they were so very nice. Every time I picked up something, they had a family memory behind it. I told them that I had had to clean out my In-Laws Estate, and I knew it was difficult. They said, "Well, You gotta do, what you gotta do". When they told me the story of their parents deaths, I remembered reading their obituaries in the newspaper. I read every obituary every day. It's my way of paying respect. The husband had died on Dec. 24th last year and his wife died 16 days later. She died of a broken heart. They had a very nice newer home with very nice, pristine old things. Everything was super clean and in the very best condition.

I ended up going to the sale four times yesterday. I bought several things the first vist. The second visit was actually part of my first - I was getting in the car when I realized there were things in the side yard for sale so I went to see what they had. I spotted an old metal glider with scrollwork on the back. It needed a paint job, but overall, it was in very good condition. It was only $25.00 which is a very good price for a piece of old metal lawn furniture. I called DH for him to approve but mostly for him to agree that he would come get it in his truck at the end of the day. I also had to steal $25.00 out of DS's allowance wallet to pay for it. Oh, the thigs I do for a bargain.

After I went home, I thought of many of the things I had seen, but didn't buy. I decided to look them up on ebay to see if I missed anything great. There were several things that looked like a good investment, so I went back. Trip #3. The sale was on my same street, jsut on the other side of the highway - so it was very close. That trip I spent $28.00 which included $10.00 for a bright orange Mickey Mouse Brunswick Bowling Ball. 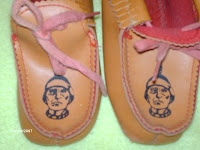 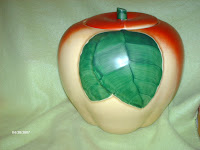 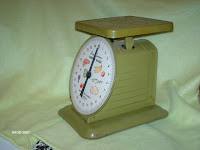 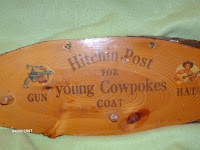 I got a lot of neat old things and it is mostly all destined for resell. I am going to keep the old kitchen scales - they were only $1.00 and they work perfectly PLUS they fit into my kitchen colors and fruit crate label theme.

When DH got home, we loaded up in the truck and went to pick up the glider. Trip #4: As we were loading it, I realized there was a matching chair for $10.00 and two side tables for $1.00 each. So, I spent an additional $12.00 that time. But, for a total of $37.00, we now have a fabulous cool old glider, chair and two side tables. The people that live behind us recently fenced in their yard, which resulted in a free fence for us. The ultimate bargain!

This afternoon, DS and I were out looking for a deal or a bargain or an adventure and didn't find much to see or do. We stopped by the Estate Sale one more time (Trip #5!). They had marked a lot of things down including a Raggedy Ann and Andy Record Player that was $5.00 yesterday, but only $1.00 today. They were also putting hte books out for FREE so I picked out a few to bring home. I realized that one whole box was full of all the Beverly Cleary and Judy Blume and all the other teenage books I read as a teen. I asked if I could have the whole box to donate to the reading class at school and they were delighted for me to take them. The Reading Teacher will be excited too.

Next week MUST be devoted to listing my treasures that you see pictured above and continuing my decluttering by taking out somemore unwanted items in the house. It MUST!
Posted by Shara at 9:26 AM