Growing Up Is Hard

Christmas Eve 9:00 pm - DS and Daddy decide to wrap the presents for me. They disappear into the bedroom with rolls of paper, tape and some bows.

9:30 pm - DS comes skidding into the bathroom so fast he nearly falls since he is wearing only socks on the hardwood floors. I hear him say, very excitedly, "Look what I made!" 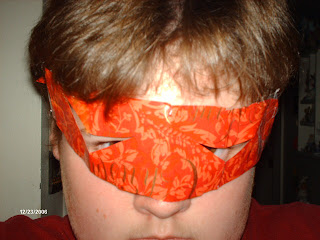 When I turn to look at him, I see that he has fashioned himself a sort of a Super Hero mask out of wrapping paper. He wass so proud that he made it and got it on right and that he can SEE through it. He was just beaming.

The thing is, DS is very tall for his age. He is only 11, but he is 5'3". When he was two people would ask how he liked Kindergarten. Resturants have been charging him adult prices since he was seven. He wears a size 9 Men's shoe. But, in his head - he is about six or seven in the way he plays. He has a very active imagination - he still likes to role play with his toys. He doesn't want to dress like a Power Ranger or play with the little figures, but he still likes the morphers and things that MAKE him a Power Ranger. He still has a big plastic steering wheel and a set of real keys and he often sits on the couch and "drives" it. Although now he goes more grown up places on his trips and not just to Chuck E. Cheese or the toy store. I think it's just fine that he plays hand has an active imagination. Being a grown up is hard, why not be a kid as long as you can be a kid??????
Posted by Shara at 9:41 AM