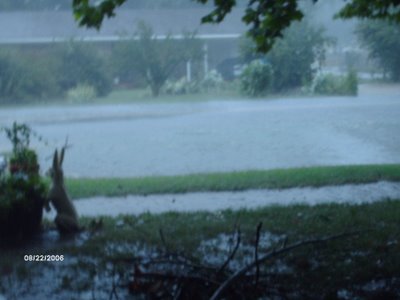 You might have noticed that I updated the name of my blog today. I seem to be talking more about myself and my lafe lately, but I will always talk about my bargains and any deals that I find!
Monday I got stuck outside the school in my car for over an hour during a horrible storm. They did a lock down and wouldn't let the kids OUT or the parents IN. Once we finally were reunited and started home, the streets were flooded and trees and limbs were down everywhere. We arrived home to a power outage and it didn't come on until 7:00 that night. This morning it was doing the same thing. We got ready and tried to go school. But, the street I live on was flooded, the highway was like a river and the lighening was cracking down everywhere. In the picture, you can't tell it, but there is a three foot ditch that runs between the sidewalk and the street. I just did not feel confident leaving him in those conditions. So, we came back home. I told him I wasn't sure if that make me a good Mother because I wouldn't leave him or a bad Mother because I didn't make him go to school. He said, "I think it makes you a GOOD Mom!" Of course, playing hookey makes anyone think their Mom is GREAT! Hopefully, he won't miss anything too important. I'll call a classmate later to see if they had any homework.