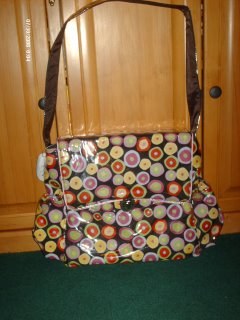 A week ago I went to one of my thrifts where I really like the people that work there. The lady that runs the whole thrift showed me these great diaper bags and asked me if I sold on ebay. Actually, she said, "You sell on ebay, right?" I told her yes so she offered me these eight diaper bags that were priced at $69.99 for $4.00 each if I bought them all. So, I decided to try them. They are a brand called Rub-A-Dub-Dub, so I googled them and found out that these are the rage right now. Apparently Katie and Tom even use them! I have one listed right now and it has a lot of watchers and a few bids. I am interested to see how it ends and how I will do with them in the end.

Went to Hobby Lobby on Tuesday to see if they had any furniture left at 66% off. I have been wanting something to store all my scrapbooking stuff in, but I don't want one of those clear plastic rolling carts. I found a wrought iron table with three basket drawers. I will put all my stickers, scissors, punches, papers, etc. in it and it can be out in the open where I can access it, but no one will know that it is my scrapbooking stuff. So, I am pleased. It was $99.99 which is an outrage, but I paid $33.00 for it, so that is a good thing!

This morning DS and I went to the thrift quickly (I don't even remember what I got there - it's still in the bags)and them to Lowe's. We passed a yard sale and stopped even though the temperature is already nearing 100 today. DS found a tub full of mint with tags Beanie Baies for 50¢ each. Now, I know that these aren't worth much, but he loves them and it gives him something to collect that we can store and display. He has bought a few at stores, but mostly they come from the Salvation Army, thrift stores and yard sales. He only buys new clean ones with the tags, so maybe someday they will be worth a little bit since people are getting rid of them now. Anyway, he got $12.00 worth so that is 24 Beanies. Most had $15.00 price tags on them and they were the old ones like Quakers, Peanut, Righty and Lefty, etc. I got a cool old turkey planter from the 50's and a hand stitched felt watermelon for my Watermelon collection.
Posted by Shara at 10:14 AM