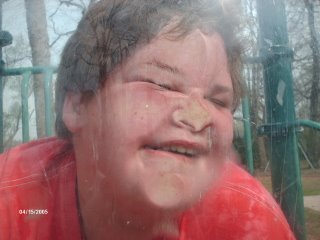 My local TV station has a photography contest called "Seasonal Snapshots". I entered this photo of my son at the park for the "Spring Snapshot" contest. They showed it during the news one night and I got a letter from the Meterologist. I also won a nice umbrella with the TV station logo on it and a one-time use camera. The camera was $9.99 at the fanchy-schmany camera shop. We went today to pick up my prizes. The news anchor herself handed me my stuff! I'm in the running now to win a $1,000.00 DVD camcorder and man, would I LOVE to win that. This is the third time I have won a prize for sending in pictures.

We went to Deals to get AA batteries - the cheap ones are 16 for $1.00. They were out - darn them. They are great for all DH's cheapo toys and Plug-n-Play video games. They did have Blue Bunny Caramel Chocolate Somethingoranother ice cream for $1.00. We bought four and brought them home to the freezer. DH put them in the freezer and then announced that he didn't have his wallet. He mentally retraced his steps and the only time he had used it was right down the street to buy a fountain drink. He called and they had it under the counter. So, whoever turned that in - THANK YOU! I have done a lot of good deeds - returning birth certificates, checks floating acros the Wal-Mart parking lot, returning unmailed credit card checks, etc. So, I am glad I did all that and someone was nice enough to return it.