Hey - I'm well.  Yay!  That crud kicked my butt.  I mean, I knew I was sick, but I am a WOMAN, so I keep on plugging along doing what needs to be done.  Dishes, laundry, dinner, errands, I did it all. But, I was exhausted pretty much after folding a load of towels.  Then, one day about two weeks later, I felt better and the next day I felt great!  And my brain suddenly started working again and I got back to thinking about the new booth and getting some things done.  I hope you don't get it, but if you do - USE YOUR HEAD and rest.  (I do still have a bit of a cough, but I attribute that to all the freaking pollen in the air.) 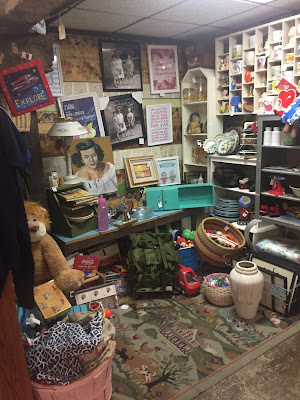 I hadn't been to the booth for two weeks since I was sick, so it was a disaster yesterday.  Have I mentioned that Lara is getting her own booth? She's moving to a booth upstairs, so I will have this big corner all to myself.  In preparation of that, I moved all of my items to the left of the booth and put all of hers on the right.  All those display pieces on the wall are hers as well as that blue table in front of the gallery wall.  She is taking all those things out, so I will have that big wall to fill.  I have all my shelves from my old booth, so I will take in a couple sets of shelves and stack them up for a big display.  The owner is insistent that all downstairs booths have furniture in them, so I will look for some random piece of furniture to put in there.  I don't sell furniture as a rule.  I have sold a few chairs and shelves and ottomans and such.  But, I have no desire to find and paint furniture.  I am happy that Lara likes doing it - but it is not for me.  We are giving up the extra set of shelves we rent, so in the end, my rent will only go up bout $15 more than I pay currently.  I still want a booth out in Prairie Grove where the Junk Ranch is and all the flea markets are located.  My old store just wasn't cutting it, so I had to leave.  But, I want to be in that town somewhere else. 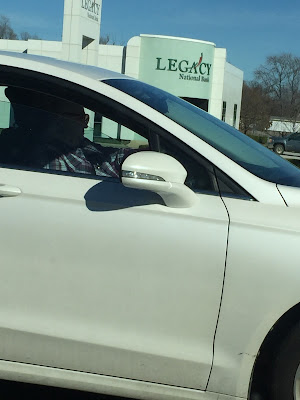 Oh, yes! I was at a corner the other day and I looked over and there was my Grandmother sitting beside me driving a nice new white car.  Here's the really crazy part.  SHE'S DEAD.  I mean, this lady looked exactly like her and it left me feeling all weird. 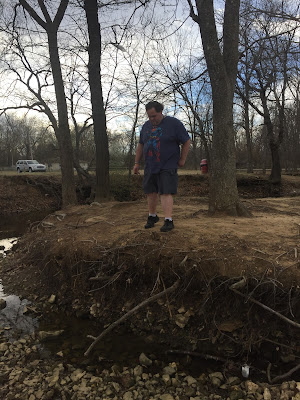 We heard on the news that there was a big grass fire in our town.  Then we realized that it was just down the street at the back of the park.  So we walked down to check it out.  (Notice the shorts in mid February.  It has been in the 80's some days here lately.  Crazy weather.)  Anyway, the fire was out and everyone was gone by the time we got there.  But, it was so windy that it could have been really bad.  We are in the middle of a Red Flag burn ban here.  So, burning is not permitted. 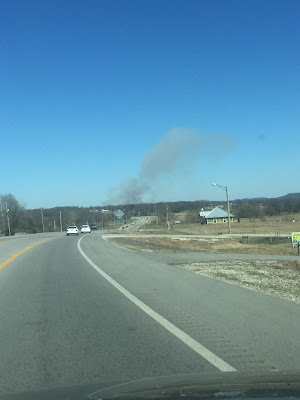 A couple days later I was leaving the Super Cheap Thrift which is about twelve miles away and I spotted smoke.  I thought it would be on top of the hill when I got there, but it kept on moving further away as I drove. 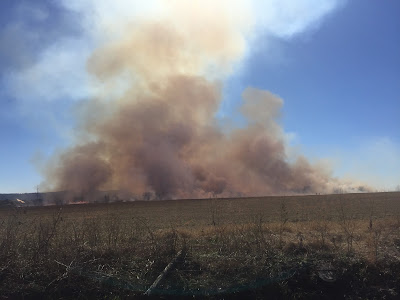 It ended up being a controlled burn by the city at the Water Treatment Plant Nature Reserve.  It was a crazy amount of smoke, so I was glad that it wasn't something like a house or the school. 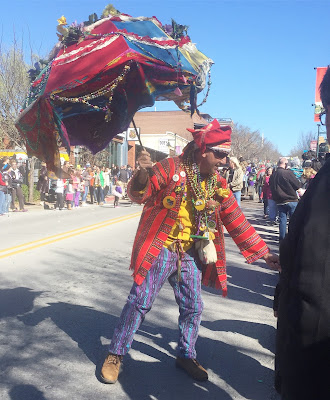 Saturday we went to our Mardi Gras parade.  I used to try and take tons of photos because it is such a bright, happy parade with all the colors and the beads flying.  But, then I decided that it is best enjoyed by being present and actually watching it and catching beads.  I did get a photo of this guy - he's been in the parade for as long as I can remember carrying that same old umbrella.  When the parade is over, the floats go park and they play Zydeco music and everyone dances.  They throw a lot more beads - better ones than they do at the parade and they even tear down the floats and pass out pieces to the crowds.   We got a lot of beads, which are fun at the parade. But then you get home and think why did I want these beads????  I'd love to go to a real Mardi Gras parade some day.

I did a little thrifting as usual. 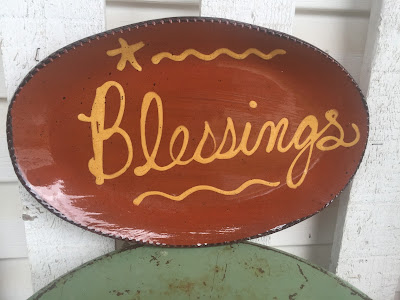 I found this at the Super Cheap Thrift.  It's signed and apparently a collectible in the primitive country decorating world.  It's on ebay, so we shall see. 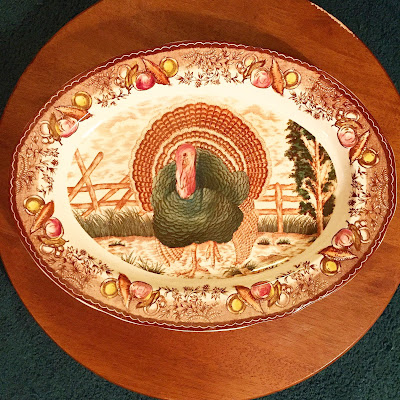 A quick stop at Goodwill on the way to the grocery store brought me several good finds.  The turkey platter is absolutely giant.  Very heavy and well made.  There isn't a mark on it, so I am still trying to research it a bit.  It will go to the Fall Junk Ranch.  It would cost a college tuition to mail it.  Heavy! It is sitting on the biggest Lazy Susan I have ever seen.  It is bigger around that my arms can reach, so I couldn't even carry it.  I am going to paint it and maybe stencil something around the edges.  I really don't do that sort of thing much.  But, I did a couple things for the last Junk Ranch and they sold right off the bat.  Who am I to turn down money?  It would be great on the center of a nice farm table.

Next week I have to take my Dad to the hospital to have his Pacemaker replaced.  Or "have my batteries changed" as he says.  It's supposed to be easy  - just a local anesthetic and a small incision. But, it sounds kind of scary to me.  His pacemaker is actually fine, but they need to replace it now, because insurance won't cover it after June.  Isn't that crazy that insurance won't cover a Pacemaker battery?  Isn't that sort of important???  Hopefully it will go quick and without an issue.  If you know anyone that has had it done - let me know so I can either calm down or totally freak out.  Thanks!

But first - tonight we are in a Tornado Watch.  Let's get through that FIRST!  Stay safe out there!
Posted by Shara at 11:48 PM