This weekend brought a couple emails and texts asking if I was okay - where was I - what had happened.  I love it that you guys actually MISS me and come looking for me.  I won't say that same old thing about not having much to blog about (even though it's true!). So, I'll just ramble and talk and see where we go.  Buckle up, my friends!


The week before last one of my favorite LOL ( Little Old Lady) thrifts had an ad on Criagslist (Lord knows who posted it because I am sure that none of the people that volunteer there know how to use a computer) that the ENTIRE store was half off all week.  Of course, I had to go.  Twice! 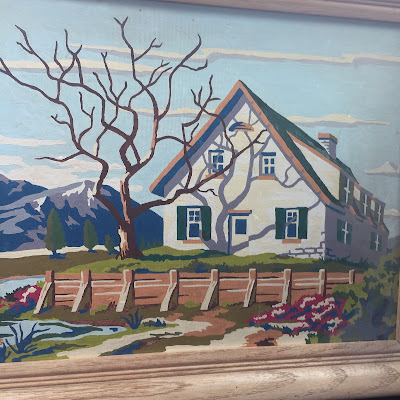 On the first trip, I got this sweet Paint by Number.  I never buy paintings, but I keep finding ones that speak to me.  They'll all go to the Junk Ranch.


On the second trip, I sent the Breadman up to the courthouse to pay our taxes while I shopped.  It's a small thrift and I usually only buy a few things.  When he came back to pick me up, he commented that he had trouble getting in the front door because "someone" had put a pile of stuff in the way. That someone was me.  I had spotted a small red suit case and I was carrying it around, Then I spotted a big old hard suitcase under a table, so I grabbed that.  When the ladies behind the counter saw what I was carrying, they asked me if I wanted to see any more "old stuff".  Uh, yes please.  They brought out a very old and heavy medicine cabinet with glass shelves and a big old washboard. 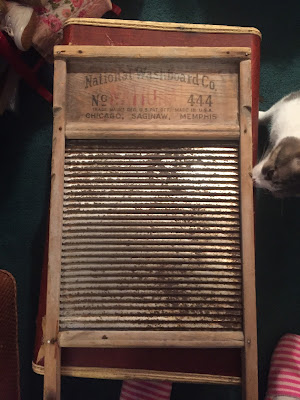 I didn't get photos of any of that, except here is the washboard and the giant suitcase is under it.  I paid $9 for everything after it was half off.  I want to re-purpose the washboard as a memo board with milkcap magnets and a little bread pan notepad holder. 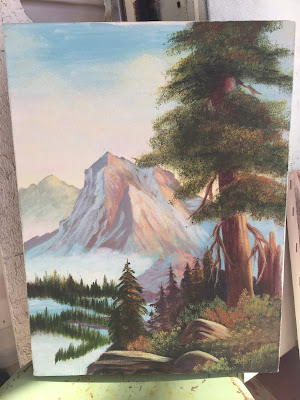 I found this lovely painting and another one of a cabin with a fisherman on the lake.  All that lodge-y, cabin-y stuff is hot now.  I think? 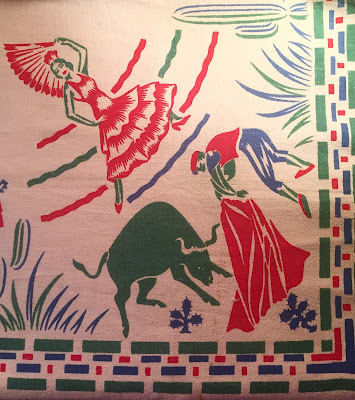 I also found this fabulous vintage tablecloth.  Now, I haven't found a vintage tablecloth in forever and I have NEVER found one at the Salvation Army.  So, that was a double whammy of goodness.  It was $4 and I had to think a minute if I should buy it or not.  I'm pretty cheap, but heck, that's a good price for a little happiness.

I saw an ad for a Sunday Sale a few weeks ago.  It was further than I usually ever go to a sale and it meant I had to take the Interstate.  Which I DO NOT DO.  But, for some reason, I really felt like I needed to go to this sale.  There were pictures showing things that looked right up my alley and I could see some prices, so I decided I would be brave and go.  When I got there, the lady having the sale was very sweet - talked to me and told me little stories about each thing I picked up.  Not in an annoying "THAT'S OLD AND AN ANTIQUE" way, but in an "I picked that up at an old house" sort of way.  I gathered up an assortment of things and went to pay. 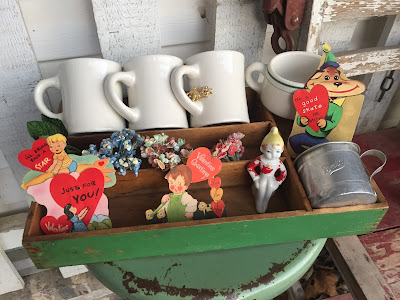 I bought the old cutlery tray, small pixie, an assortment of old Valentines, a sweet deer pin, the baby cup and a couple handfuls of old millinery flowers.   (The cups came from Goodwill on the way home).

I must interject with a story here.  Last Spring I went to the Neosho City Wide sales in Missouri.  I was all hyped and ready to shop when I ran over a broken street sign post and slashed my tire.  I spent the rest of the day sitting in front of a tire display at Walmart and my junking mood died out.  When we were all repaired, I headed on out to a few sales, but my mind wasn't quite in it.  We stopped at one sale at a house on a steep hill with a curved driveway. I visited with the nice men there and they asked if I was having a fun day and I told them about my tire woes.  As we talked, I spotted the tiniest pair of antique crutches sitting on a table.  They were only about 2.5 feet tall and made of one split piece of wood.  I commented on them, but for some reason I put them down.  I have remembered them since then and I fully intended to stop at that sale next spring and see if by some miracle they still had them.  Why I wanted them, I don't really know. But, they were just one of those things that I will always remember.  (In Junior High, I learned that this is called FORESHADOWING).  Duhn-Duhn-Duhn!

As I was leaving the Sunday Sale, I saw a tiny pair of crutches leaning on the table leg.  They were just like the ones that I had remembered!  I grabbed them and went to pay without even asking how much.  As I paid her the $3 (a steal!), I told her the story I just told you about seeing a pair in Neosho and having remorse about not buying them.  She looked at me for a long time.  And then she said, "I bought those in Neosho.  At a house on a steep hill with a circular driveway."  WHAT THE WHAT? Not only did I get A tiny pair of crutches - I got THE tiny pair of crutches.  Wild, right?  Now, the story would be more fun to tell people if the actual item wan't a tiny pair of crutches, because I realize that's a weird thing.  But, those of us that love junk will get it. 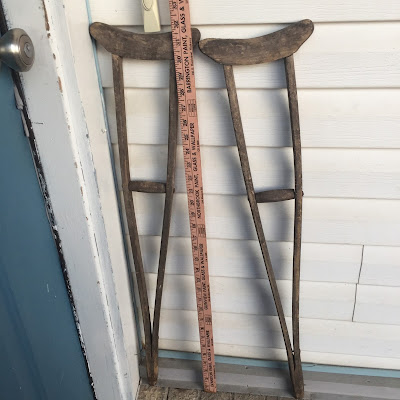 I have been sick for over a week.  My chest is full, my head is clogged.  I am a notoriously bad medicine taker.  Most medicine makes me groggy if it's for daytime and the nightime stuff keeps me awake.  Plus I sometimes get hives and itchy skin and my hair crawls, so I just don't take much.  I do pound back the Muscinex which has saved me more than a few times.  It just takes a long time to get through stuff.   I stayed home for five days straight before I decided I could venture out.  I sat in the backseat and the Breadman drove us to Sam's.  I stuck out my bottom lip and asked to go to a thrift along the way. 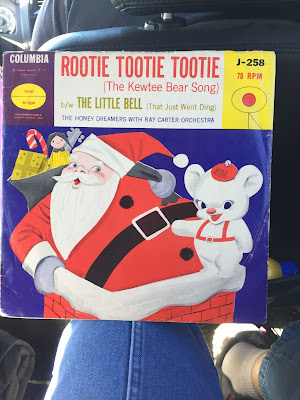 I didn't find much, but he dug in the record box and pulled out this gem.  Rootie Tootie Tootie The Kewpie Bear Song by the Honey Dreamers.  I mean, it makes your teeth hurt to just look at it!

My big day out made me stay home on Thursday but I felt like I could hit a sale on Friday.  It was a digger sale - lots of boxes lined up and piles of junk to dig in.  It was a sad little house in such disrepair.  The house should have been condemned which is sad for the tenant, not to mention the landlord is 93, so that is another family in for a rude awakening soon.  I found a pile of old tins, some Bucilla kits for ebay, some old books and a few other things.  Halfway through my digging, I had a huge horrible hacking coughing attack and when when I stood up, I got vertigo  The lady having the sale offered to get me a chair so I wouldn't pass out on her.  I think I better stay home a few more days. 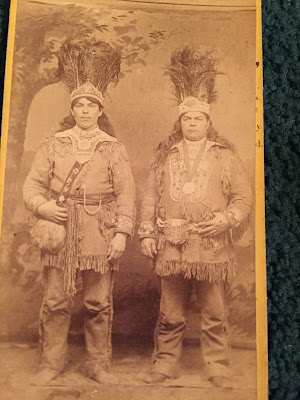 My best find there was a big sack full of old Stereoscope cards.  I have a ton from my Grandparents and I found a Steroviewer last year, so they are fun to look through.  There are some good ones in there, like this one.

I stayed home on Saturday, but today I went to another sale.  (Have I mentioned that is has been nearly 80 lately so people are having sales?)  I got some crafty type stuff and these guys. 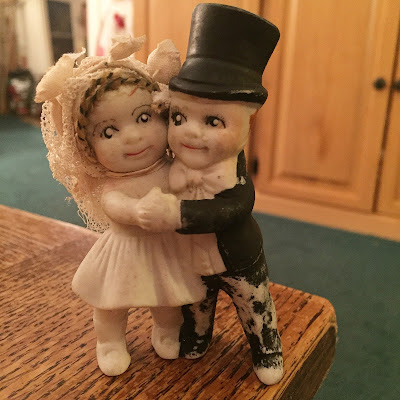 They are old bisque.  A sweet old bride and groom with a tulle veil and millinery flowers.  Super sweet.  But, then tonight, I was watching the Walking Dead and I picked them up and realized.....ZOMBIES.    Holy crapola.  I hope they don't come after me in my sleep!  They actually do have a hint of the cuteness that they once had and a bit of old creepiness.  It's borderline. 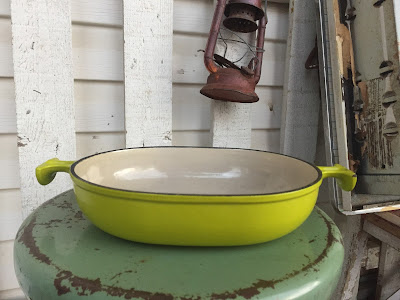 After the sale I hit Goodwill and picked up a good Le Creuset for ebay. 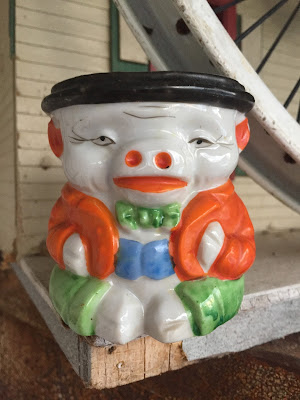 And this silly old Japan pig planter for me.

And now I must go to bed and rest up from another day out.

Thanks for checking on me.  I'll be back sooner than later, I promise! 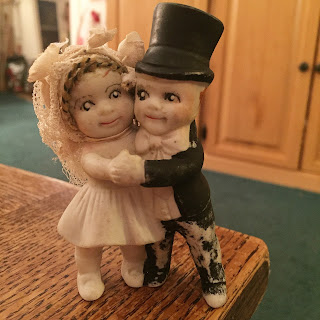