Today as I perusing the aisle's of Goodwill procrastinating about going out in the 100 degree heat to the 200 degree car.  I hadn't really found anything worth buying and I had a case of "empty hand syndrome" so I kept on looking.  That's when I spotted a cart of fresh new merchandise that a clerk rolled out on the floor and I pounced.  I spotted something that I needed, but I didn't KNOW I needed. 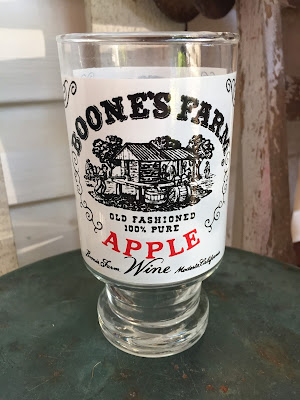 Wait - did I mention I was four years old at the time?

When I was was a kid, still living in Kansas, my Mom's three brothers had a bunch of friends that had motorcycles.  They would come over to our house and hang out most of the afternoon. Everyone would sit on their motorcycles in the front yard and talk and listen to music and just visit and hang out.  Because they were young (but over 18 and legal to drink), money was tight and cheap wine fit the bill.  They all had bottles of Boone's Apple Wine in paper bags that they were sipping out of throughout the day.

I was about four years old and my Uncle's loved me.  Their friends thought I was cute and they liked me too.  AS THEY SHOULD.  :)  They liked me sooooooo much that when I walked up and batted my eyes and asked for a "sip" of their wine, they looked over their shoulder so no one would see  - and then gave me the teeneiest sip of Apple Wine.  No harm.  No foul.

I went around the ring of motorcycles, one by one, person by person and got the teeniest sip of Boone's Apple Wine from each one of them.

After awhile I needed to go in the house to go to the bathroom.

I found my Mama and told her that I needed to go to the potty.  She took me in and stood with me while I went to the bathroom.  I was laughing.  A bit too much and for no reason. And I was trying to tell her something but I sounded all slurry.  Then I said, "I feel funny, Mama!" and BOOM I fell off the toilet!  And kept on laughing.

I barfed up my guts.  My Mom said she had never smelled anything like that in her LIFE.  Probably because I had a stomach full of whatever a four year old eats along with a bellyful of Apple Wine. (I probably only had 1/2 cup total, but that's WAY TOO much for a four year old.

A new rule was implemented - "No booze for the kid".  But, I never asked for it again.  And honestly, I really haven't ever drank much since then.

The glass will hold some flowers in the windowsill.

That story still makes me chuckle after all these years!
Posted by Shara at 11:45 PM