Earlier in the week, my friend sent me a text for a yard sale that was right up the road from me that had interesting things listed.  The best one being a huge pile of old red handled rolling pins - and they all had 25¢ stickers on them.  The ad said "no early birds and no holds" so I decided that those rolling pins would be mine. Now, we all know that I am not a morning person.  I start hitting sales after 10:00 or even later and I still do okay.  But, I decided that I would get up an an unholy hour (6:30) and be at that sale when it started.  I was the second person in the driveway as they were starting to unpack. They were very nice and I stayed out of the way so they could put things out.  I picked up a few things then I asked if the rolling pins were still available.  "No, those sold last night."  Now, I KNOW it was just a yard sale and they had every right to sell whatever whenever.  But dammit, I got up early for those rolling pins.

I left and drove to a neighborhood sale up the road.  It was to start at 8:00 and it was only 7:30.  I drove past the "Newlywed Sale" in the brand new very fancy house and went on up the road to a sale that was still setting up.  I bought one thing there then doubled back to the "Newlywed Sale." Now here is an interesting tidbit I learned about the Newlyweds - they had been married 18 months and they were both in their 70's!  Not your typical Newlywed yard sale.  I found some good old stuff there at great prices and I am sick that I didn't stop there first.  Live and learn I suppose. 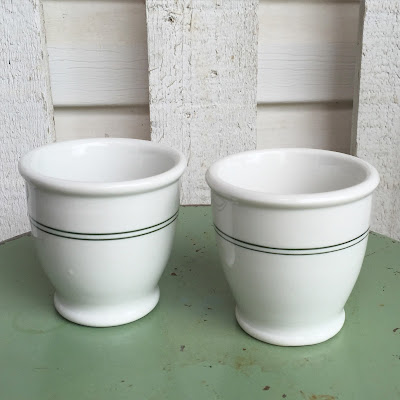 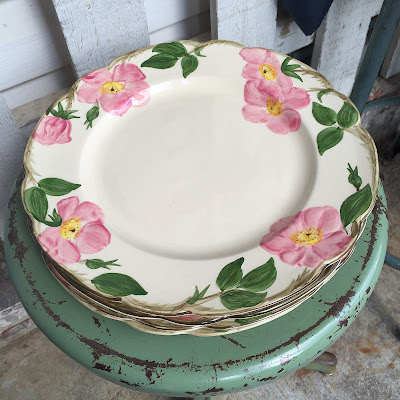 Four beautiful old  Franciscan Desert Rose dinner plates for 50¢ each.  I have them on ebay but I hope they don't sell.  The idea of packaging them up is stressing me out. 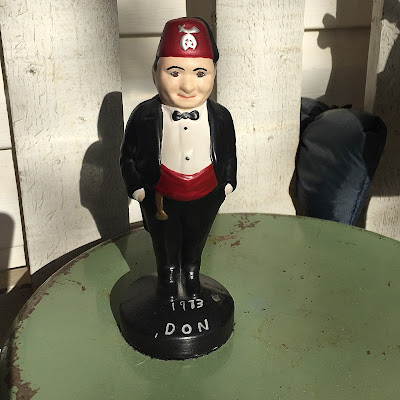 This old chalkware Shriner made me laugh. 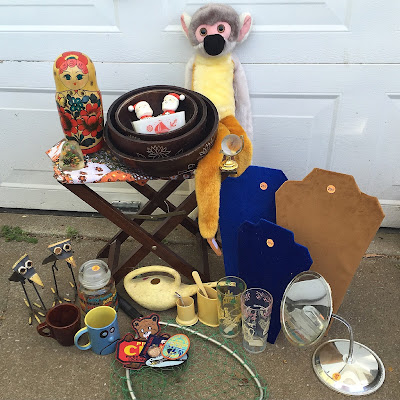 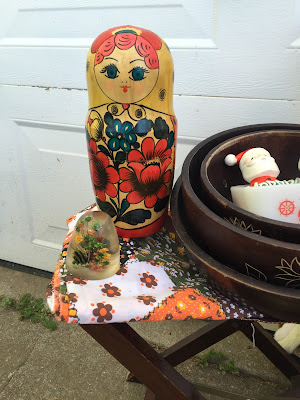 I ran to get to this Nesting Doll.  No one else was even at the sale, but I still ran to get it!  Sadly, it is empty, but it is still fantastic.  It is about as big as a two liter bottle of pop.  Huge! 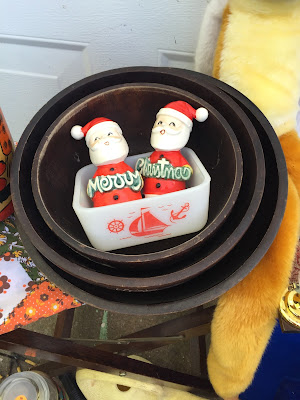 The bowls came from the rolling pin sale.  They aren't old, but still interesting enough.  The little refrigerator dish is McKee Sailboat.  I had no clue, but my pal Heidi filled me in. The Santa S&P's are marked Japan, but they have plastic stoppers so not sure of their age - probably 1960's? 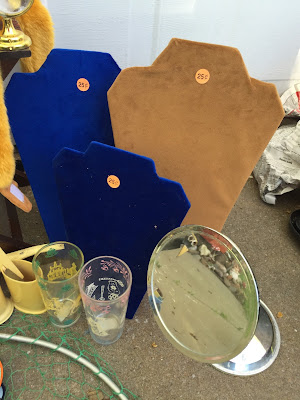 These velvety jewelry displays will be great for my feedsack pendants at The Junk Ranch.  That's an old magnifying mirror on the right and a couple of good old glasses on the left. 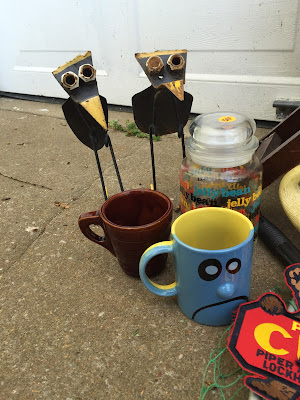 I sell a lot of coffee cups at the college booth.  So, I am always on the lookout for cheap fun, unusual mugs. The Sad Face is a Happy Face on the reverse side. The old folk art shovel crows went in my yard.

As soon as I got home that morning, Lara sent me a text about an Estate Sale with great prices, so I headed over there.  She was right,  Everything was 25¢ or so.  It was really picked over, but I found enough to fill up a tote bag and a box and my total was $6.70.

The worst thing about the sale that in the driveway there was a huge walk-in dumpster and the door was open.  I told the guy working in the garage that the good stuff was usually in the dumpster.  He assured me it was just junk.  Then he said, "But you can take a peek."  I didn't though. 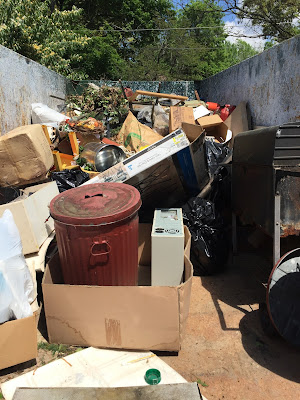 Later after I paid, I told him I was going to take a peek by the dumpster.  He went back in the house and then another guy came over to get me out of the dumpster.  But, I was actually beside it taking photos of some peony bushes. 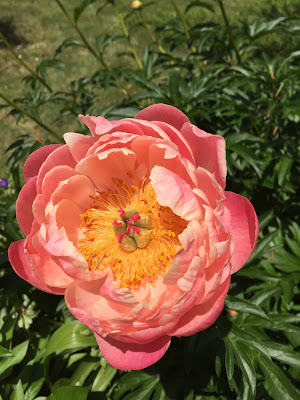 *I actually did step into the dumpster to peek and take that photo.  Everyone on Instagram said it was free since it was in the dumpster, but it was a privately owned dumpster on private property, so it wasn't free for the taking.  I did see some stuff that I wish someone could have rescued and not see it go to the landfill.  But, there wasn't much I could do about it. 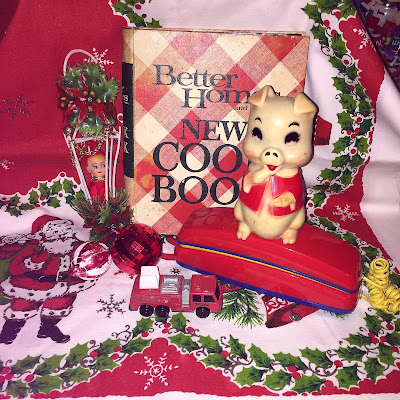 I didn't take photos of everything I bought, but all this came from that sale.  Pristine vintage Christmas tablecloth, kneehugger ornament, couple old ornaments, firetruck, old push button phone, cookbook and a squeaky pig - all for $1.10 total.

***I bought a firetruck just like that for The Bean before he could even walk.  My Mom was holding him when I handed it to him - he wriggled and fought to be sat down on the ground.  When she sat him on the ground, he took that little fire truck and drove it back and forth like a madman.  How did he even know to do that?  It is one of my favorite memories. 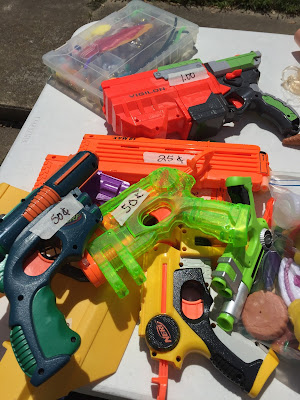 Speaking of The Bean - I sent him this photo from a yard sale.  You are never too old for Nerf.  He has a ton so we know it's expensive stuff.  I found him all of this plus a giant clear one with all sorts of attachments for a total of $5.00.  I was hoping some were doubles so I could put them in the booth.  But he deemed them all "keepers." At least he paid me back!

Today I decided to that it was time that I had a yard sale.  I started puling things out of the garage, and I had a nice pile going.  Then, on a whim, I threw it all in the truck and sent it off to Goodwill. Sometimes your time is just more than important than a little bit of stuff.  I still might have a sale, but I haven't really decided.  Yard sales are SO MUCH FUN to go to and SO MUCH NOT FUN to have. People are rude, they offer you a quarter on a five dollar item, their kids kids mess things, up, there are speech barriers, and on and one.  Just so not worth it.