Thursday night I ran through all the yard sales listed - over 250 in all - and chose the ones that looked the most promising - School Sales, Church Sales, Fundraisers and any sale that listed Vintage.  Lara gave me a heads up about an app that routes your trip form location to location, so I loaded all the addresses into it  right before I went to bed.


Traffic is really horrible on the Interstate until after 8:00, so I knew I either had to go well before - like at 6:30 or wait until 8:00 when it subsided.  Since we all know I am not a morning person, you can guess which choice I took.  I was ready to leave at 8:00.  We swung through ChickfilA for a biscuit and then we were on our way. Right before we crossed the Missouri border and entered the land of nothing - straight highways and no businesses or houses - my tiny bladder with it's cup o' coffee in it was screaming STOP NOW.  A normal person would stop at McDonald's or a Gas Station for a bathroom break.  But, not me.  Nope.  I knew that a brand new Goodwill had just opened in that very town not more than a week ago.  Goodwill is the only thrift with a clean bathroom so WIN WIN.  We were the fist customers as soon as they opened the door.  Luckily the bathrooms were right by the front door so sweet relief was quick.  Ahhhhhh!  Of course I had to look around while I was there!  This town is a Village  - not a town or a city - a Village.  It is comprised of numerous golf courses, country clubs, homes and very few businesses.  The median age is 61 and there is no school and hardly any children.  Therefore, I pictured the place smack dab full of vintage goodness.  And, I was actually right - but it was really expensive.  Things I expected to be $10 were $25 - so I won't be putting it on my "GO TO" list unless I happen to be passing by.

Now, having said that - I actually found one of my best finds of the day there. 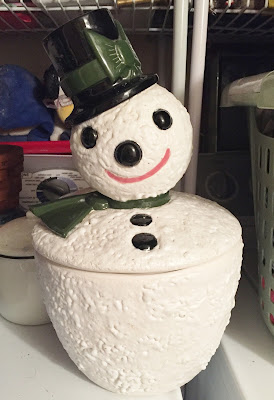 Giant vintage snowman cookie jar.  For FIVE DOLLARS.  There were a dozen handmade cups around him that matched - each one had wonkier and wonkier eyes.  Like the person that made them just got sick of painting those DAMN SNOWMAN EYES.  I hate separating things, but I only wanted the cookie jar, so I left all those wonky eyed snowmen on the shelf.  As we drove, about thirty minutes up the road, I said completely out of the blue,"Why does a cookie jar need cups?"  Then I was guilt free about leaving those wonky eyes little SOB's.

When we got to Neosho, I took the first turn into downtown.  We passed up a big parking lot full of vendors and made a mental note to go back to that sale at some point.  The first big intersection had about a billion signs pointing in every direction, so I went that way.  I was not prepared for what I found  - the street at the top of the hill was Oak Ridge (one Lara had said always had good sales). The street had been turned into a one way to handle all the traffic and foot traffic.  You just parked where you could and took off on foot.  We parked at the top of a steep incline and I prayed the car wouldn't get towed or just flat out roll down the hill before we returned.  We took off to the left and started shopping in yards.  Each yard had many people set up selling, plus there were random hot dog, cotton candy, kettle corn and tamale stands along the way.  Cars were single file bumper to bumper and the foot traffic was going in each direction with people pushing strollers, cart and even wheelbarrows full of stuff they had bought. 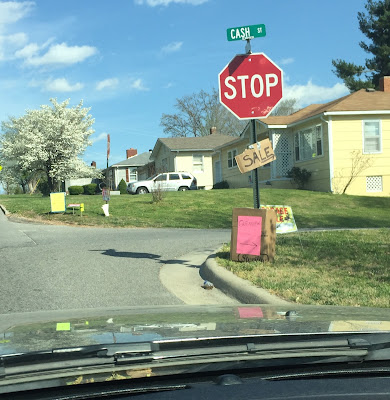 This was the only picture of a corner that I managed to get - signs everywhere.
Loved that it was CASH Street too.

My first purchase was a vintage Fisher Price Dog pull toy for $1.00.  Cheap cute vintage right off the bat?  This was going to be THE BEST DAY EVER. Although it might be TIRING. (I learned in the 4th grade about foreshadowing when it comes to writing.  That's when you hint at something that will happen later in the story.  You, my friends,  have just been foreshadowed.)

We continued up the street until we couldn't see the car anymore, then crossed the street to hit the sales on that side until we got back to the car.  I had a small tote bag and I had it half full of random things when we got back to the car.  We loaded up and turned down the street to find a better place to park.  There was a Church sale, so we found the one and only empty spot at the end of the sidewalk in the grass.  I pulled in and we got out and started walking up the block.  We ended back up at the church and bought a few things - so we headed to the car to unload.  When I started the car, it made a DING and the low pressure tire light came on.  It does that from time to time, so it didn't surprise me. What did surprise me was when I pulled out onto the street, the passenger front wheel was about six inches lower than the rest of the car.  We stopped and got out to discover not just a flat, but a tire with a huge gash in it. Ugh.  My world flashed before my eyes - I was in another STATE!  What was I going to do?  That's when my little baby boy plucked his pacifier out of his mouth and looked up at me and said, "I can change it".  I swear to you - that was the first time that I have been happy that he is a grown man and not my little baby boy anymore.  (Upon investigation, we had ran over the remnants of a street sign that had been broken off about 1" from the ground in the grass.  Sliced the crap out of that tire.) 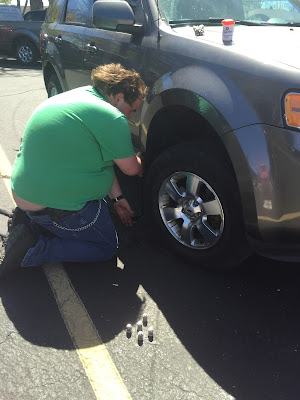 Long story short (too late, right?) - he changed the tire, we drove to Wal-Mart Tire & Lube, sat by a huge stack of tires for two hours, got a rubber induced migraine and spent $117 on a new tire. BUT! I had the money on me to pay for it (we operate in cash), my son changed the tire for us, we could have had this happen on the Interstate, or we could have had a wreck, Wal-Mart had the right size tire in stock and plenty of other things to be thankful for so I was not upset by it.  I was really only upset that we lost three hours from our fun day of yard saling. 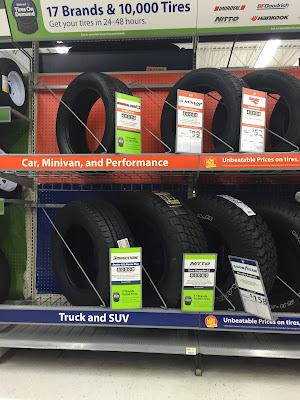 My view for two hours.

By the time we got back into the groove, most sales were closing up or were running out of merchandise.  We did go back to that big parking lot sale and that is where I got the bulk of my items. I was discouraged at first because many of the vendors had new merchandise like t-shirts, hats, flags and knives.  But, The Bean collects knives (
Posted by Shara at 11:50 PM