The New and Improved Funky Booth

I've had the "big booth" since November 2012, then Lara and I partnered up for the "Little Booth" in September 2014.  We recently moved out of our small shelf space into a larger booth area and now the "little booth" is much larger than the "big booth".  So, I need to think of new names for them.  I actually call the new bigger booth the "Funky Booth" since we carry funky stuff and it is in a store called "Funky Yardsale" and the Prairie Grove booth since that is where it is located.  But how boring is THAT?


The point to this particular post is that on Monday night, Lara and I met up and revamped our new big booth.  I had just temporarily set it up when we took it over last month, so we  wanted to freshen it up.  Lara needed a project to occupy her mind, so she started Pinning ideas and came up with a pallet wall and a wall of miscellaneous crates and shelves.  Now, mind you - I am really busy getting ready for The Junk Ranch and it is all that I can think about right now.  I just did not use my head and understand all the work she was doing at her house to get ready for this transformation.  When I saw all the prep work she had done, I felt like a class A heel for not helping her.  Lara, is of course, without a doubt, this nicest person I have even encountered in my life so she made me told me over and over that it was nothing.  HA.  It was EVERYTHING!  I owe her HUGE. 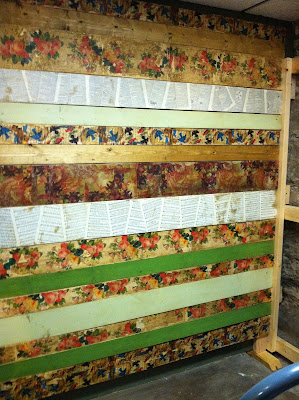 First, she had bought and cut all these boards - then she did a treatment to each individual board - stains, light pain, dark pain, dictionary pages, this paper napkin treatment she learned and on and on.  Each board different and each one just got better and better.  Honestly.  She used a drill and a jigsaw because she is all handy dandy like that and I held up the pieces of wood for her because I am not handy dandy.

Then we started hauling in all these cabinets she had in her garage and crates and shelves and things we had on hand.  We had SO much stuff in that booth, I swore it was never ever EVER going to fit. But, between her pre-planning and a bit of tweaking.... 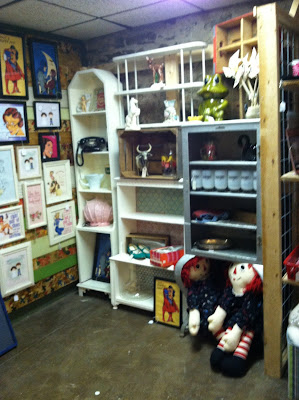 It all fit just like magic.  It is interesting to look at and then all the stuff on the shelves is just icing on the cake!  This photo was blurry because it was leaving time and I was starving and tired.  I almost forgot to take photos at all.  I am going back tomorrow and will do my best to take some better ones. 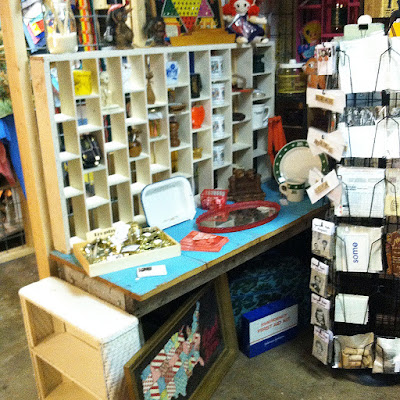 The other wall had a grid wall on it and we needed shelving of some sort.  Lara had this awesome cubby in her stash (if that goes missing, I know nothing).  We were trying to think of a way to hang it or use it when we decided to see if that blue topped table would happen to fit.  There is a huge wooden beam that runs in a weird spot.  But, we put it there, held our mouths just right and shoved and PERFECTION.  Then we plunked the cubby right on top.  I love all the space for smalls and the table top in front for other things too. 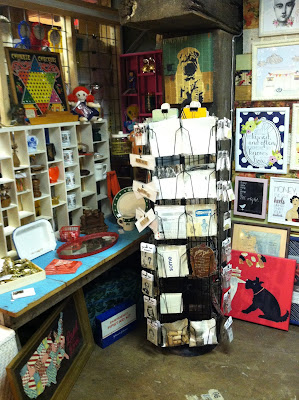 I had a bright pink crate shelf thing that just happened to fit on the back wall beside the cubby.  I swear to you, it was all like buttah.  I moved my rack over to be in front of the beam.  It still spins and holds a lot of merchandise in a small footprint. 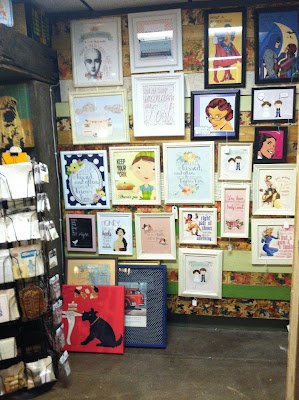 After it was all set up, Lara worked her magic on the gallery wall with all her prints and I set up all the stuff in the shelves.  We went from an huge mess to instant organization pretty fast.  The other vendors were walking past in the midst of our mess and then they were like. "Wow! You girls did a LOT!"  We really do work well together.  It is so nice to have found a fellow junker that is my friend now.

So, there you have it the new improved Funky Booth.  After I get the Junk Ranch under my belt, (ONE WEEK!)  I am gong to tackle the other booth,  It is an ugly fright compared to this beauty.  *Hey Lara - can you do me a solid and cut, paint and stain up about fifteen boards and round up some quirky shelves?  Thanks so much!
Posted by Shara at 11:40 PM