The Week In Junk: Blowmolds and Bambi

Friday The Bean and I ran away from home to go to a local outdoor festival.  It was a beautiful day to be out. 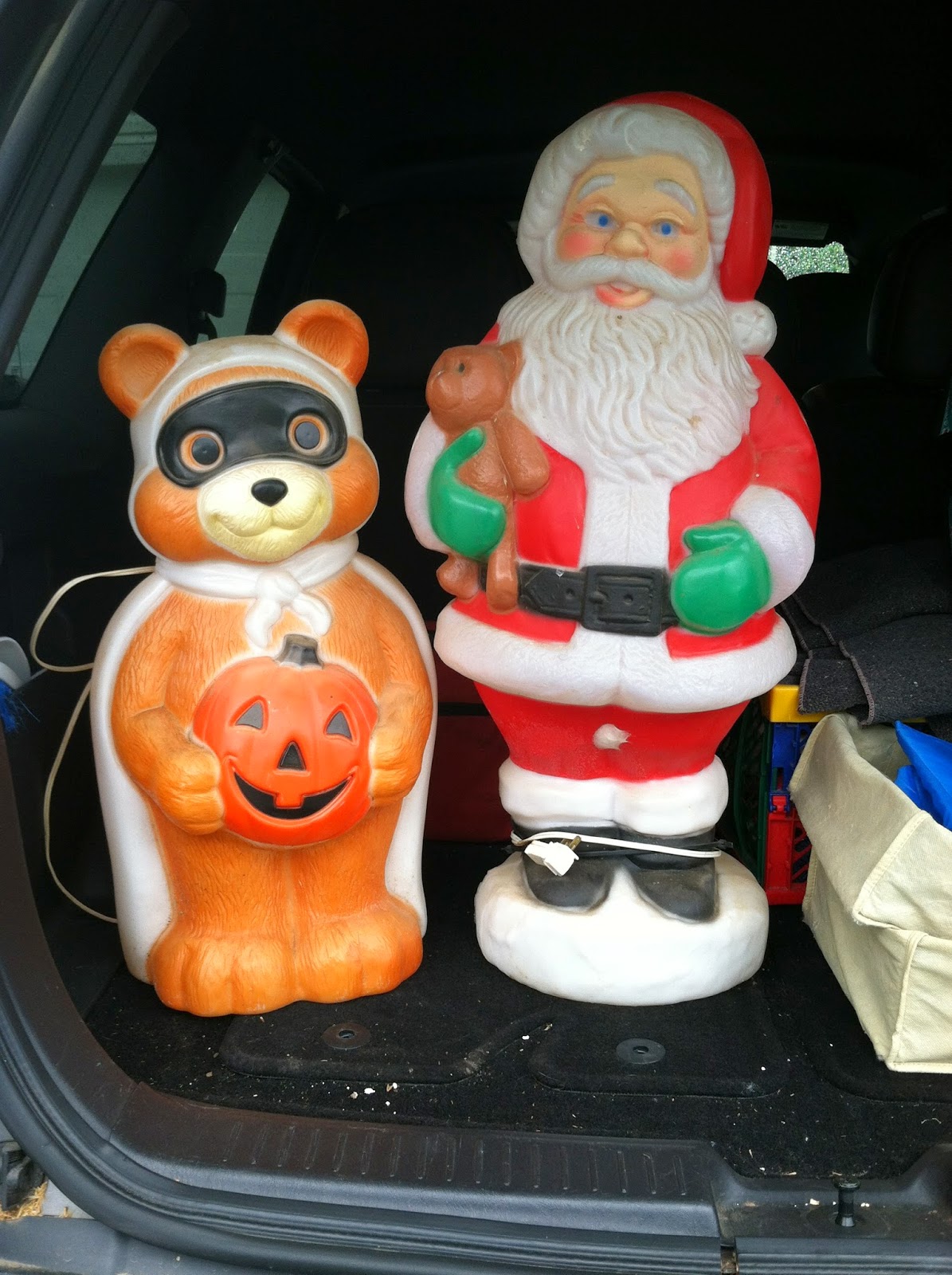 On the way to the festival, I detoured to a Rummage Sale at the Senior Center in a itty bitty town. There was very little there, but I spotted two items of interest behind a door.  $7.50 later they were in the car and we were on our way.  My blowmold storage shed it getting kind of full at this point.  I have had good luck finding them this Spring.  It's not a bad problem to have.


The festival ended up being more commercial stuff rather than arts and crafts, so we just walked around and looked at the pretty greenery. 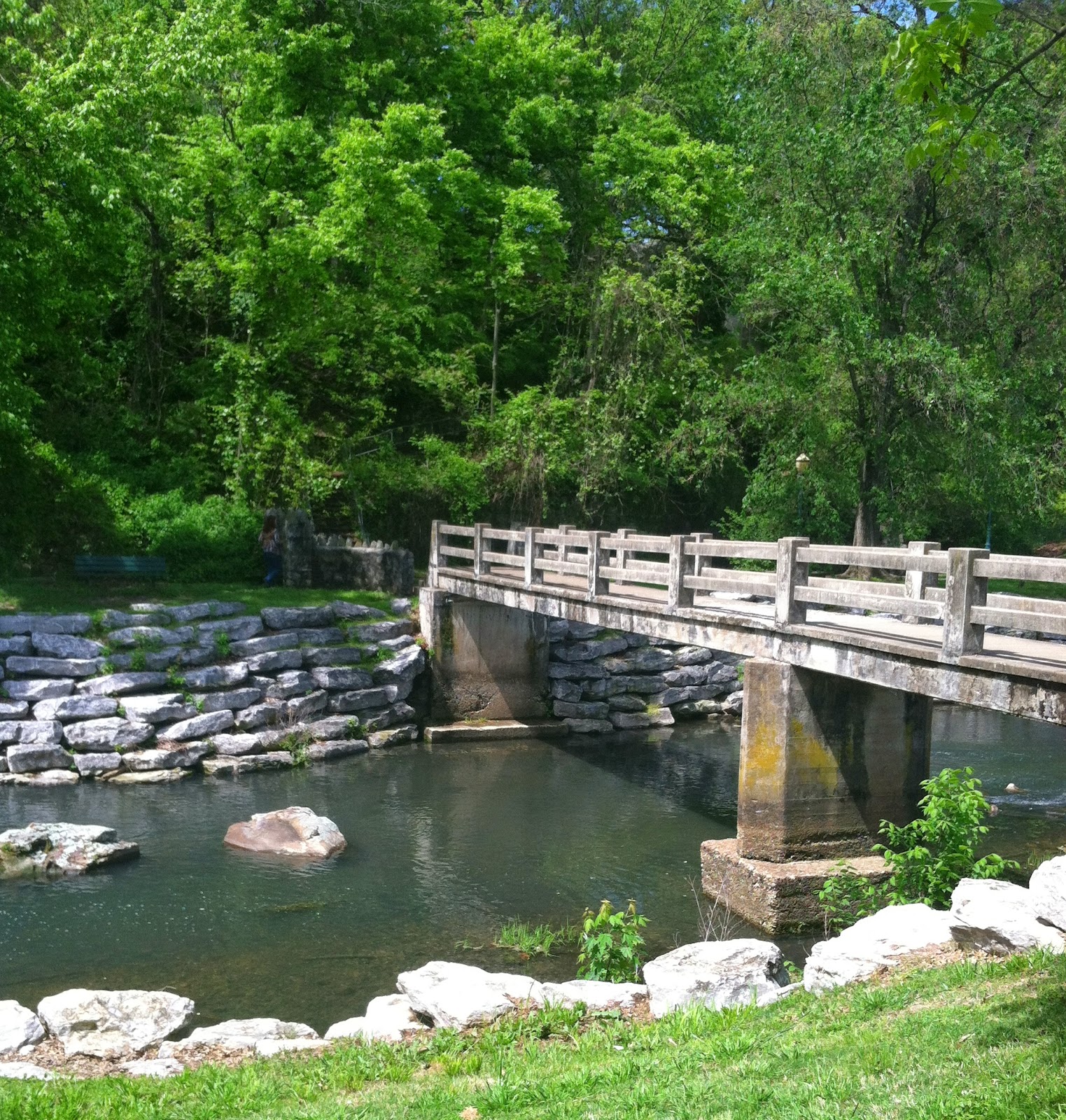 We have had major amounts of rain lately so the trees and grass have just gone nuts.  It is SO green and lush everywhere. 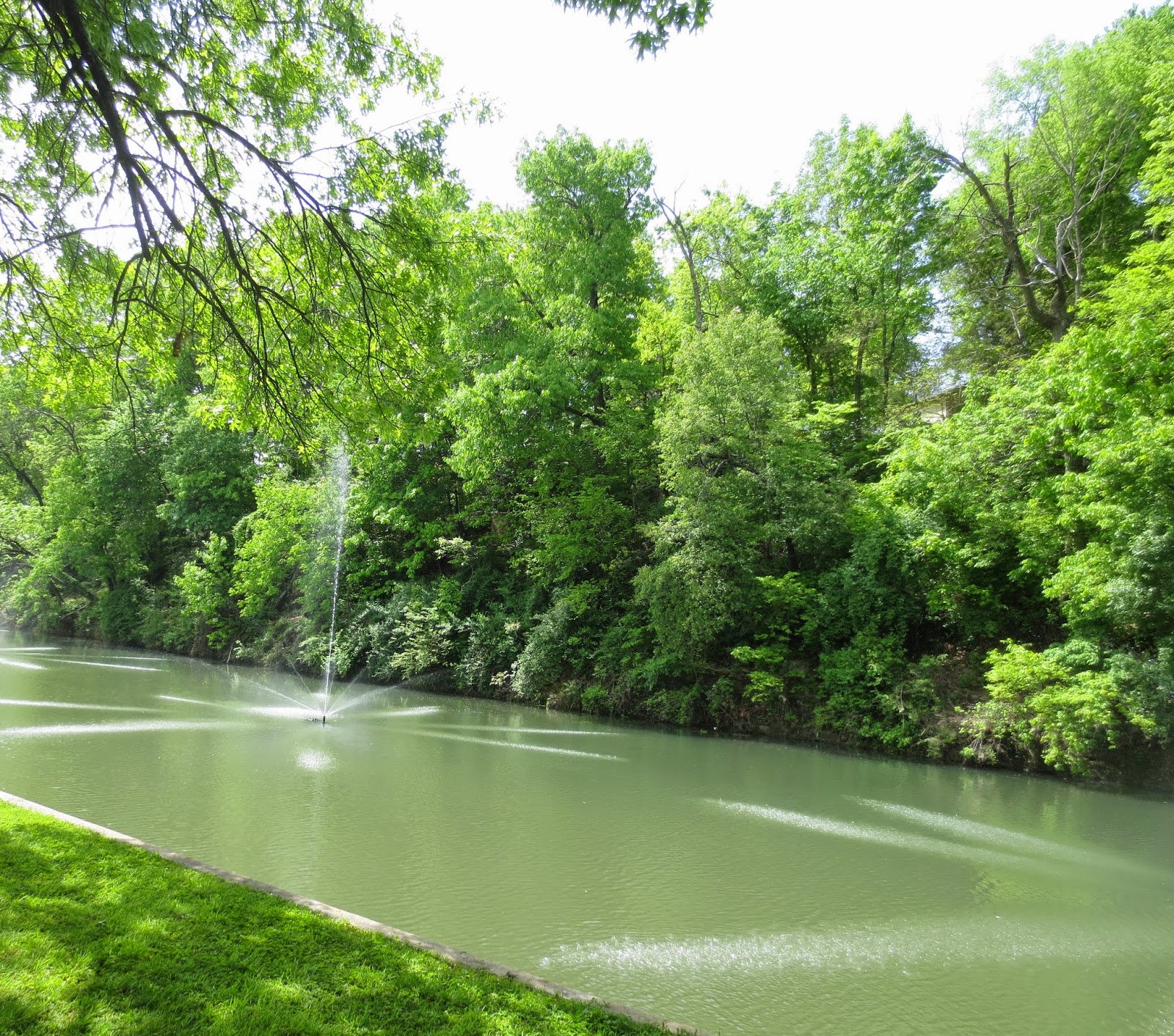 This tiny town has three parks that run adjacent to one another and run along this creek.  Normally it is a quiet place to walk and reflect.  With the festival, it was crowded and reeked of BBQ smoke and Onion Rings. 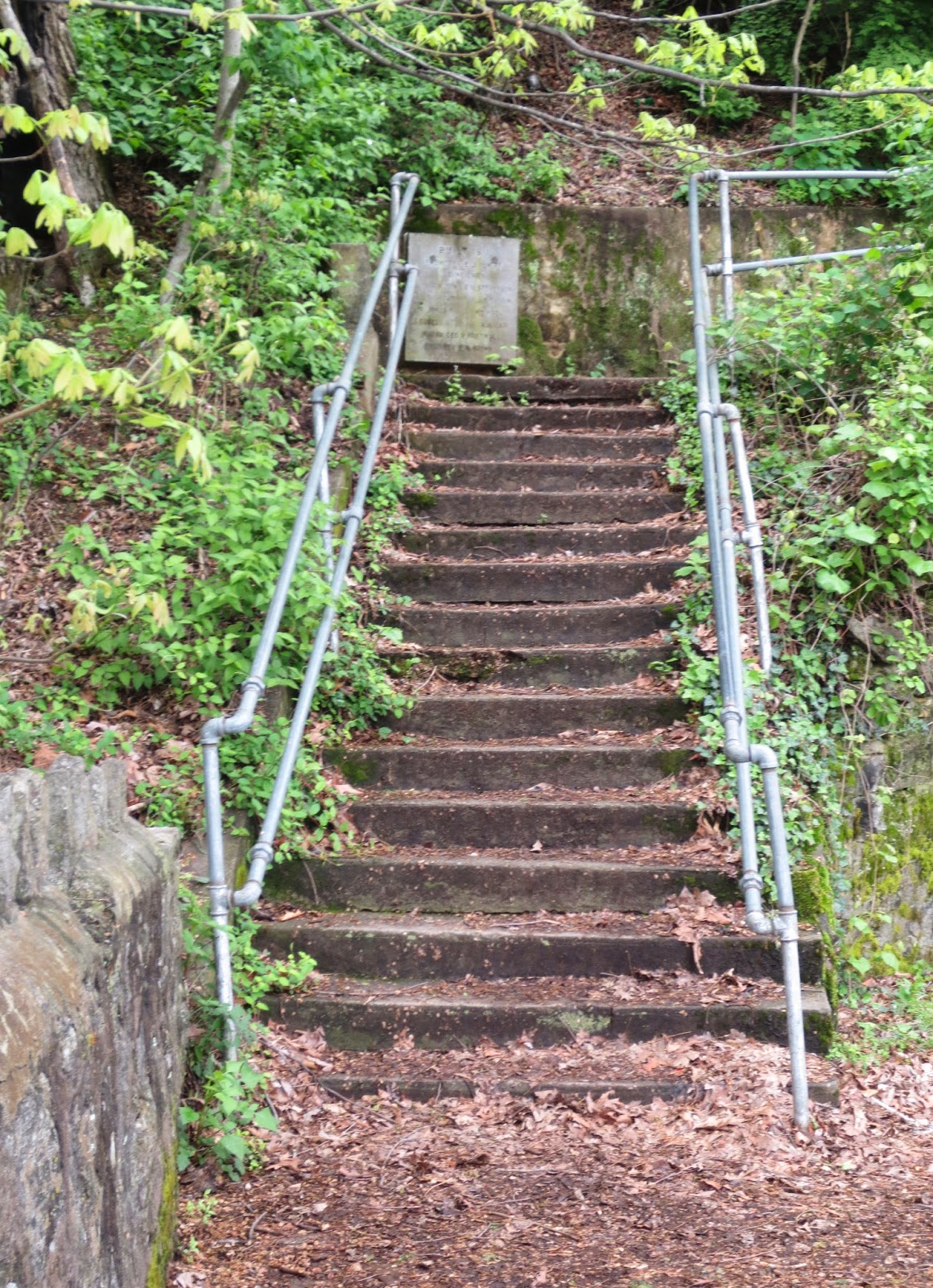 Loved these old steps that lead up to the street above.  Moments after I took this photo, a lady walked up these steps carrying a cat.  I don't know why.  But, she did. 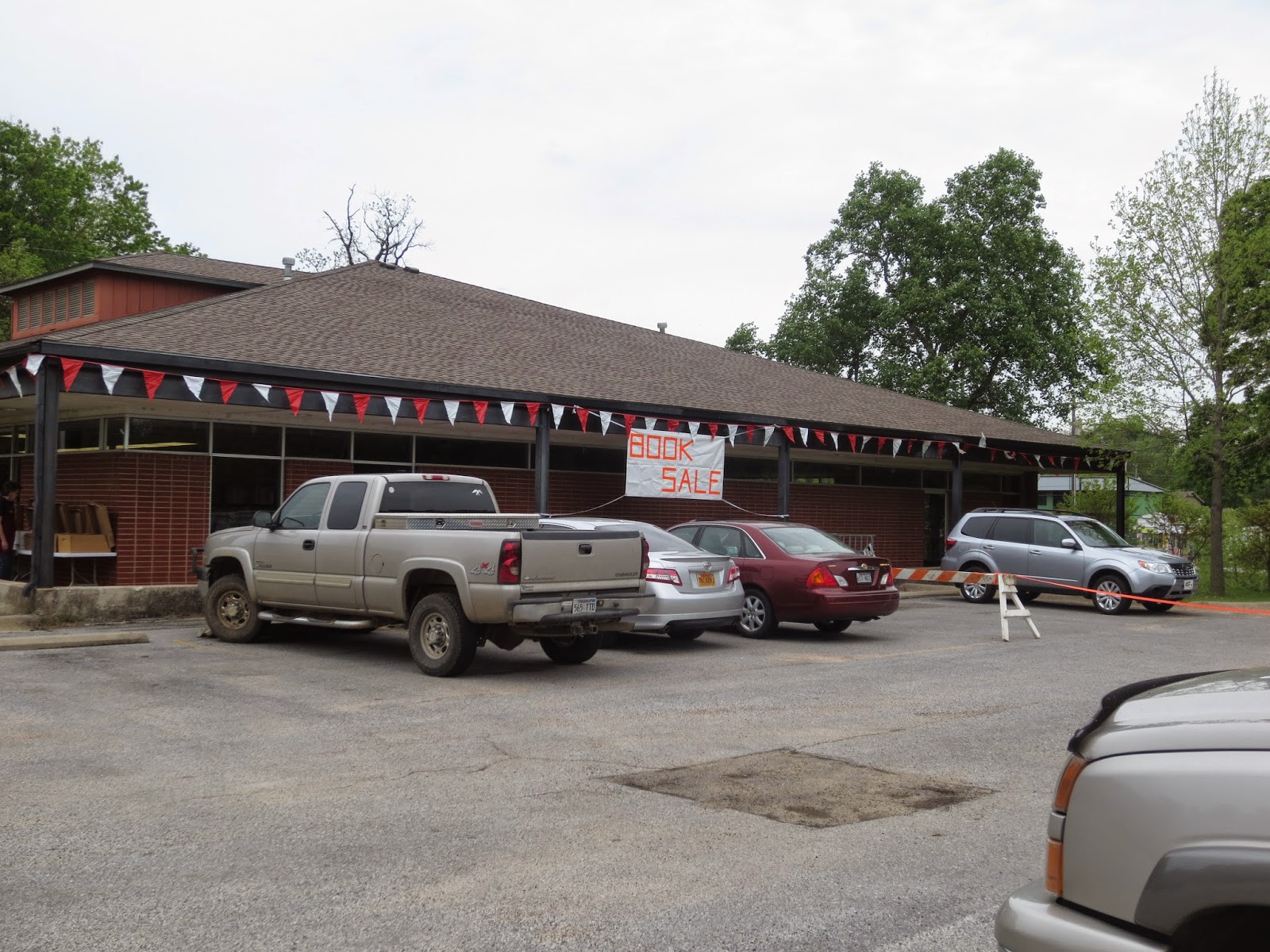 The Library is near one of the parks and I spotted this BOOK SALE sign.  I didn't expect much. 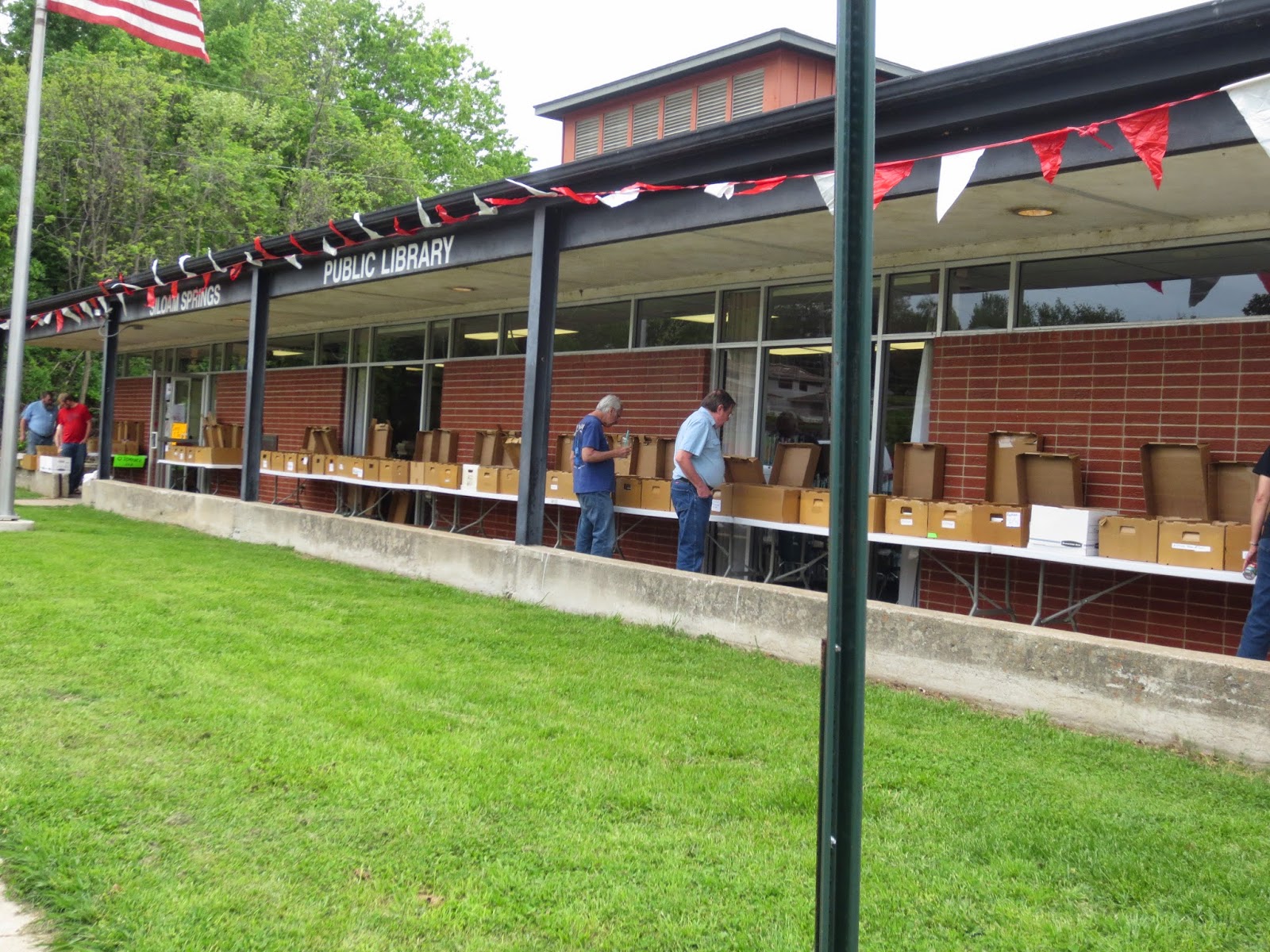 Bazinga!  I was wrong!  Plus, there were twice as many inside the library as well.  I bought some sheet music books from 1889 which were in disrepair.  They were only 25¢ each, so I dismantled them into sheet music ephemera bundles for the booths.  At least they are being saved in some respect.  I also bought a beautiful 1940's copy of Snow White that I thought might be good for framing, but the majority of the color pictures show Snow White lying of the floor poisoned, dead on the ground in the woods or laying in a glass coffin.  Whomp Whomp.  Not really great for a kid's room.  Unless you don't really like your kid. :) 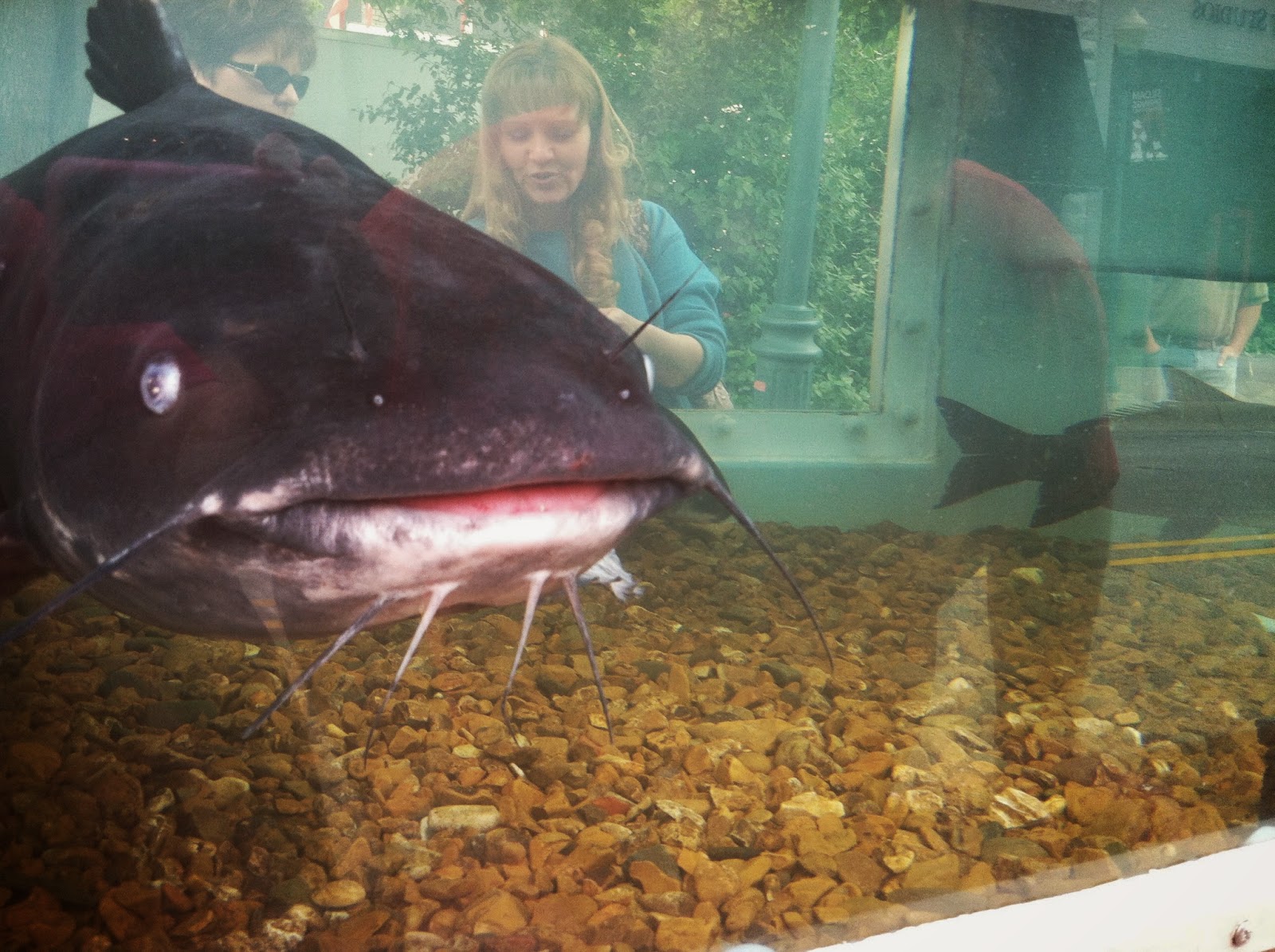 We spent some time at this mobile fish tank admiring this very large and very old catfish.  He came to the glass and looked at me while I looked at him.  I spoke of my love and admiration for him and then we left. 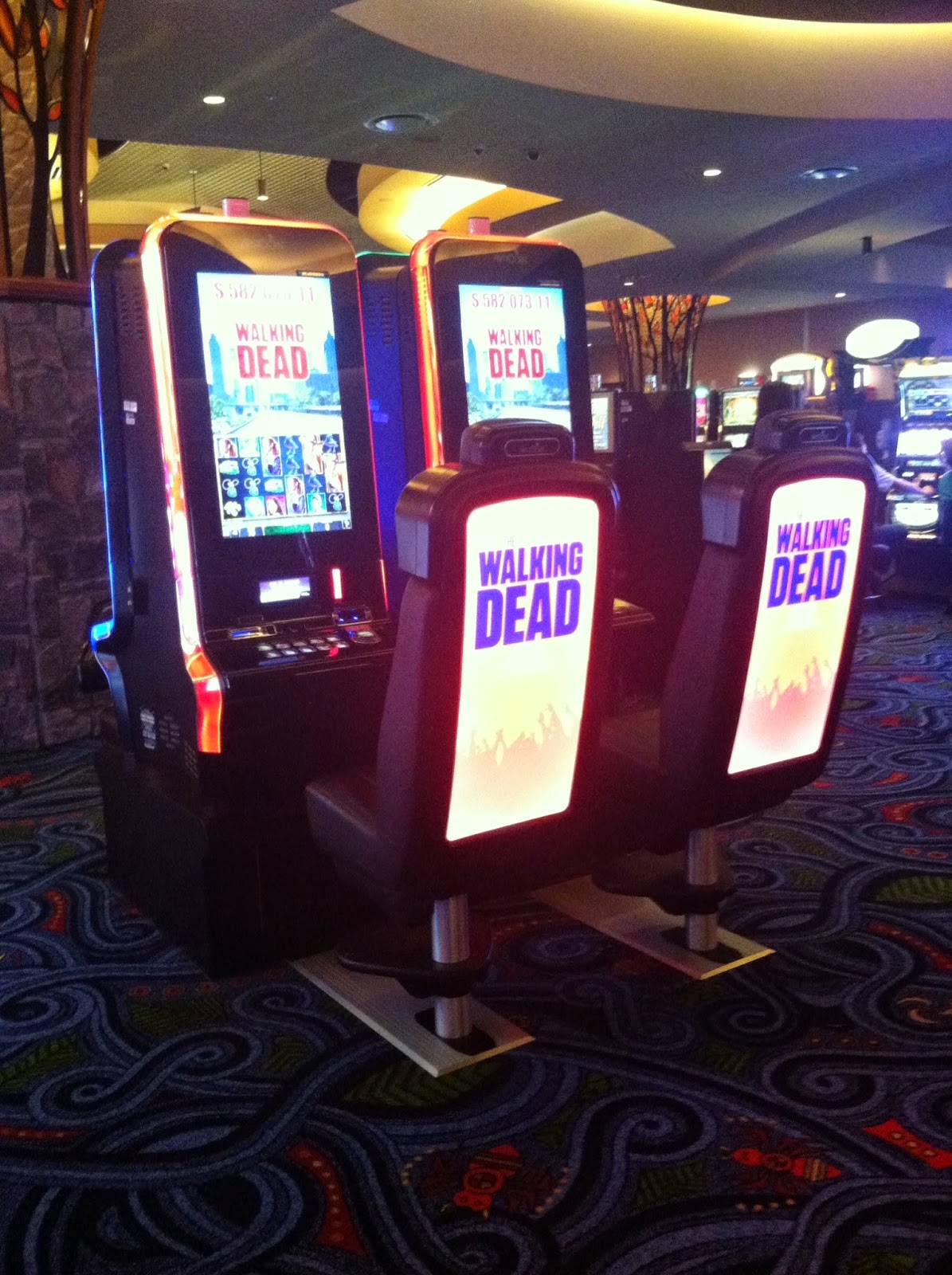 We went to the casino where not more than twenty minutes later, I was eating a huge plate of catfish. I didn't even think about what I was doing, but The Bean was quick to point it out.  I'm sorry Mr. Catfish.  I also turned a twenty dollar bill into a hundred dollar bill......and then I lost it.  *SAD FACE*

Saturday I hit about seven yard sales and the Super Cheap Thrift to boot.  I bought a bunch of stuff, but it is all already in the booths or on the way.  I don't think I bought one thing to keep. SHOCKING.  I stopped at one Estate Sale that had a box at the end of the driveway with a sign that said FREE STUFF.  I went on up the driveway to the tables of things and the ladies told me, "Everything is free."  I said, "Not just the stuff in that box?"  Nope - everything that was left was free. I got some books, some old Cracker tins, greeting cards and cookbooks and some more things. Nothing spectacular, but when it's free, game on! 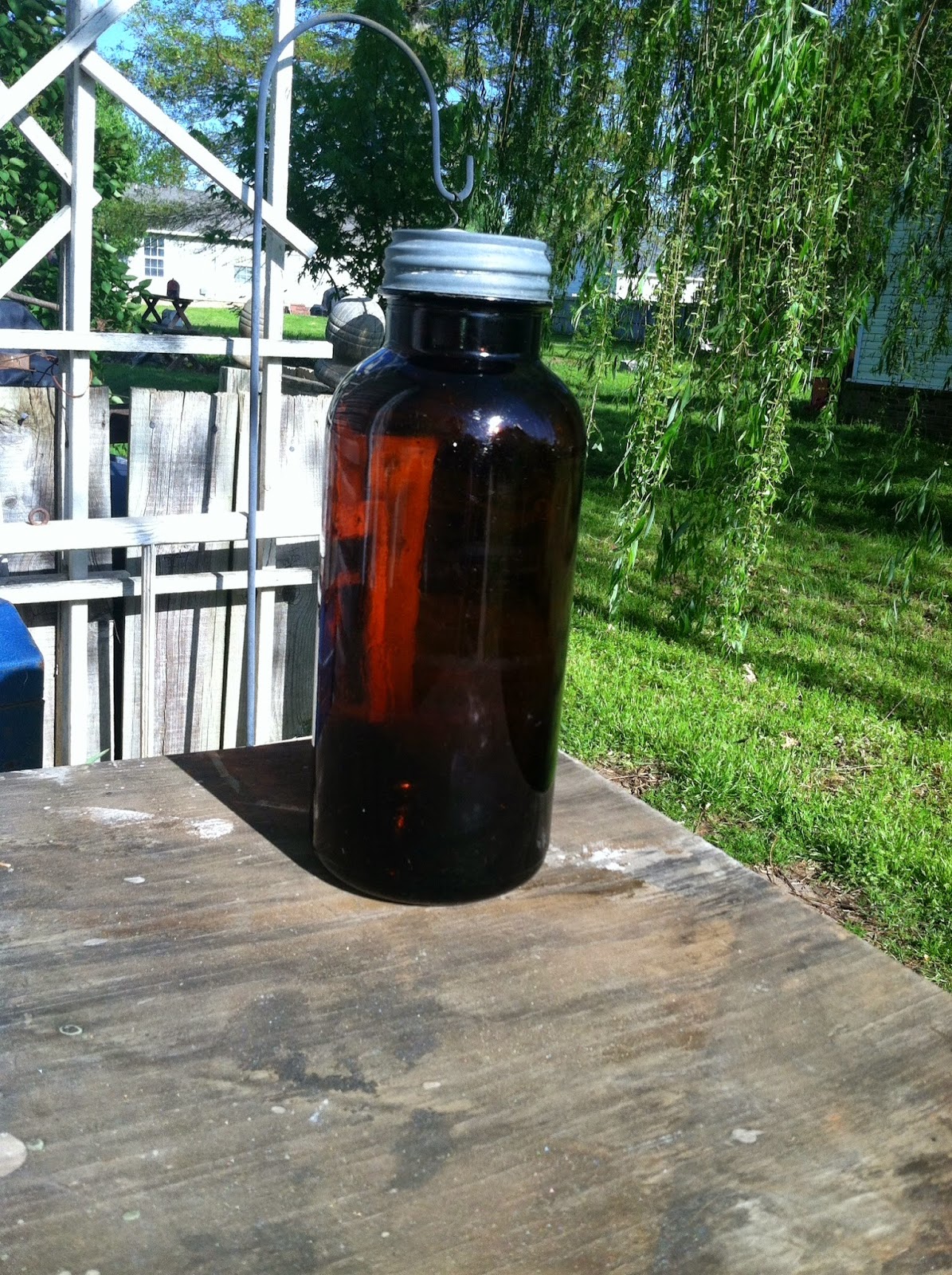 I bought this huge old bottle at a sale - it's about 14" tall.  It had some thick old oily stuff at the bottom that I cleaned out.  I need to research it a bit.  Bottles are not my forte, but this one was unique.  I bought a chair from the U of A library which isn't that wonderful, but it is useful and cost 50¢, so why not!  A baggie of old metal cookie cutters, THREE Scrabble games and a few other random things from here and there. 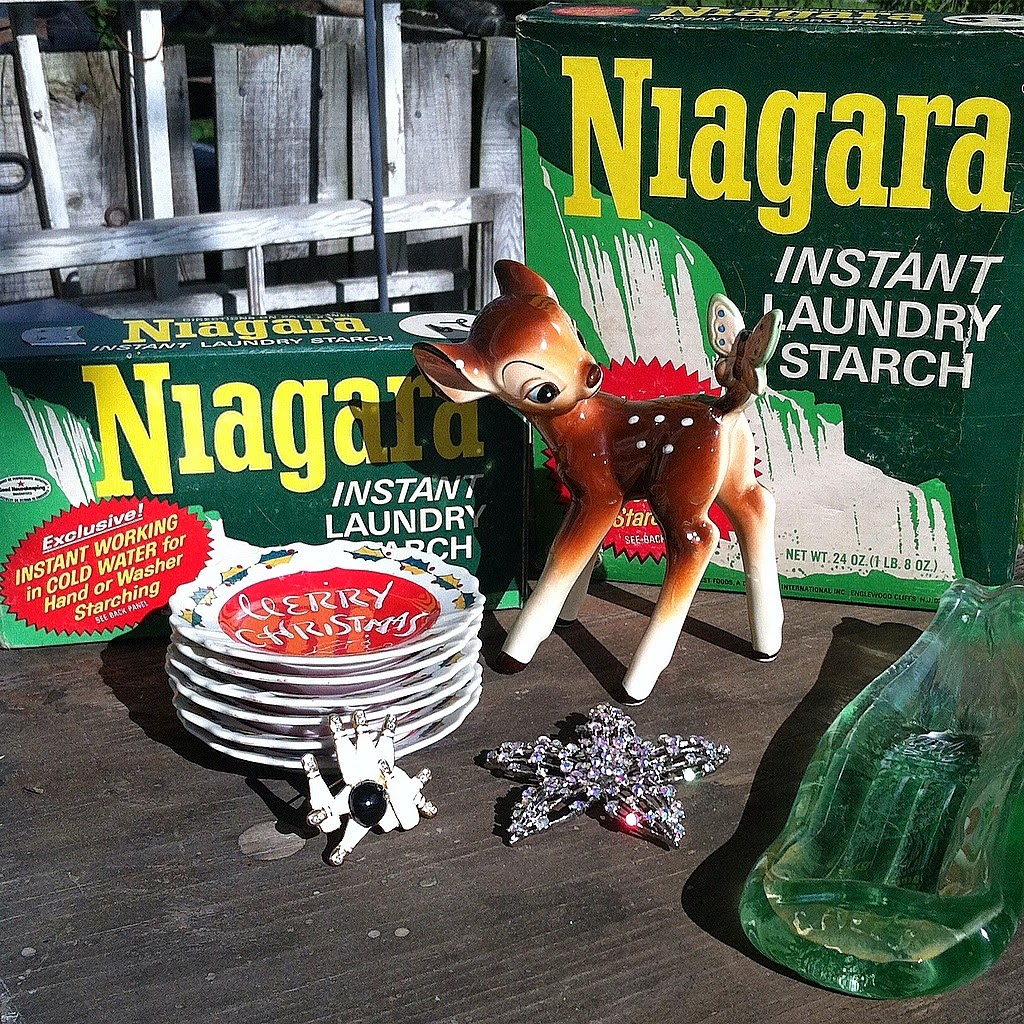 These are just a few of my favorite things from the day. I bought a dozen of the Niagara Starch boxes.  I think they would be great in a laundry room so they will go to the Junk Ranch.  A cute vintage Bambi, a melted old Coke bottle that I guess is a spoon rest(?), a set of tiny vintage Merry Christmas plates, a bowling brooch and a sparkly flower brooch.  I might keep the brooch and the plates.  But, maybe not.  I'm in more of a selling mood lately.  That is until I come across a hoard of tablecloths or vintage Christmas at a sale then my hoarder instincts will take over.  :D