About a week ago we stopped in Lowe's to pick up a bag of potting soil.  They were having a sale, so in the end we bought 10 bags of black mulch, weed block, three flats of flowers, a fern and two bags of potting soil. It all sounded like SUCH a good idea at Lowe's.  But at home - wow - what a job! 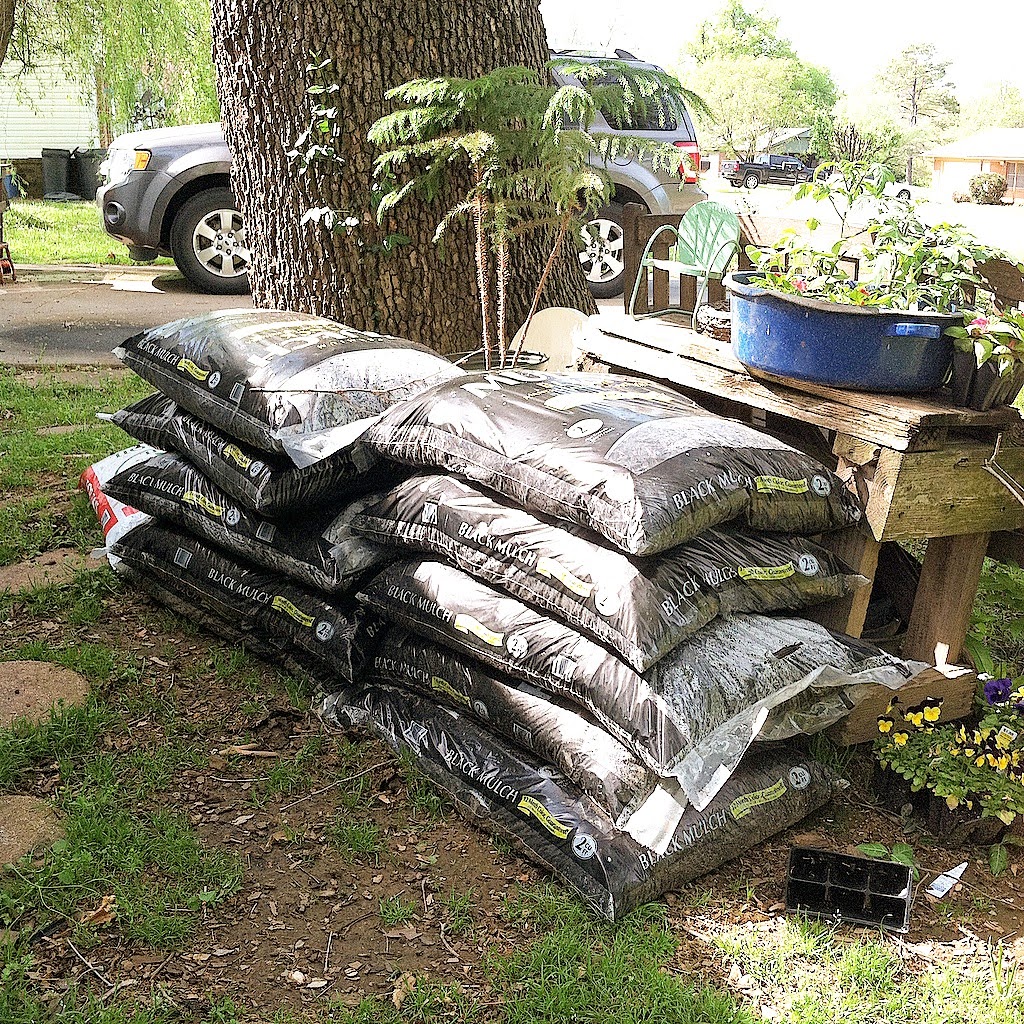 We brought it home and stacked in it the front yard, right where I could see it all week long.  We have had a ton of stormy rainy days as of late which has prevented us from getting out there and getting it done.

Sunday we got out in the yard about noon and hit it hard.  We pulled out all the "junk" I have in the landscaping, then raked out all the old wood chips, pulled up the ratty old weed block and started with all new fresh things.  Our house is white with gray brick, so I thought the black mulch would look nicer than the red mulch we had previously.  Did you know that the dirt in Arkansas is red? There is no black dirt here unless they truck it in from somewhere else.  Anyway, I think that is why I dislike the red mulch because it looks like the red dirt.

After we put the mulch down in one area, I got to put all my treasures back while the boys moved on to the next section.  We knocked the whole job out in a few hours and I was SUPER proud of us!  No fights or anything.  (This is a major improvement for the three of us.  Well, one of us.  You will have to guess which one...)

My idea of landscaping is not cookie cutter and some people would not like it.  But, I like it and I get to use all my found treasures.  A bunch of junk in the yard is a bunch of junk.  But place it selectively, use like pieces and like colors and I think it works!  And flowers - lots of pops of colorful flowers. 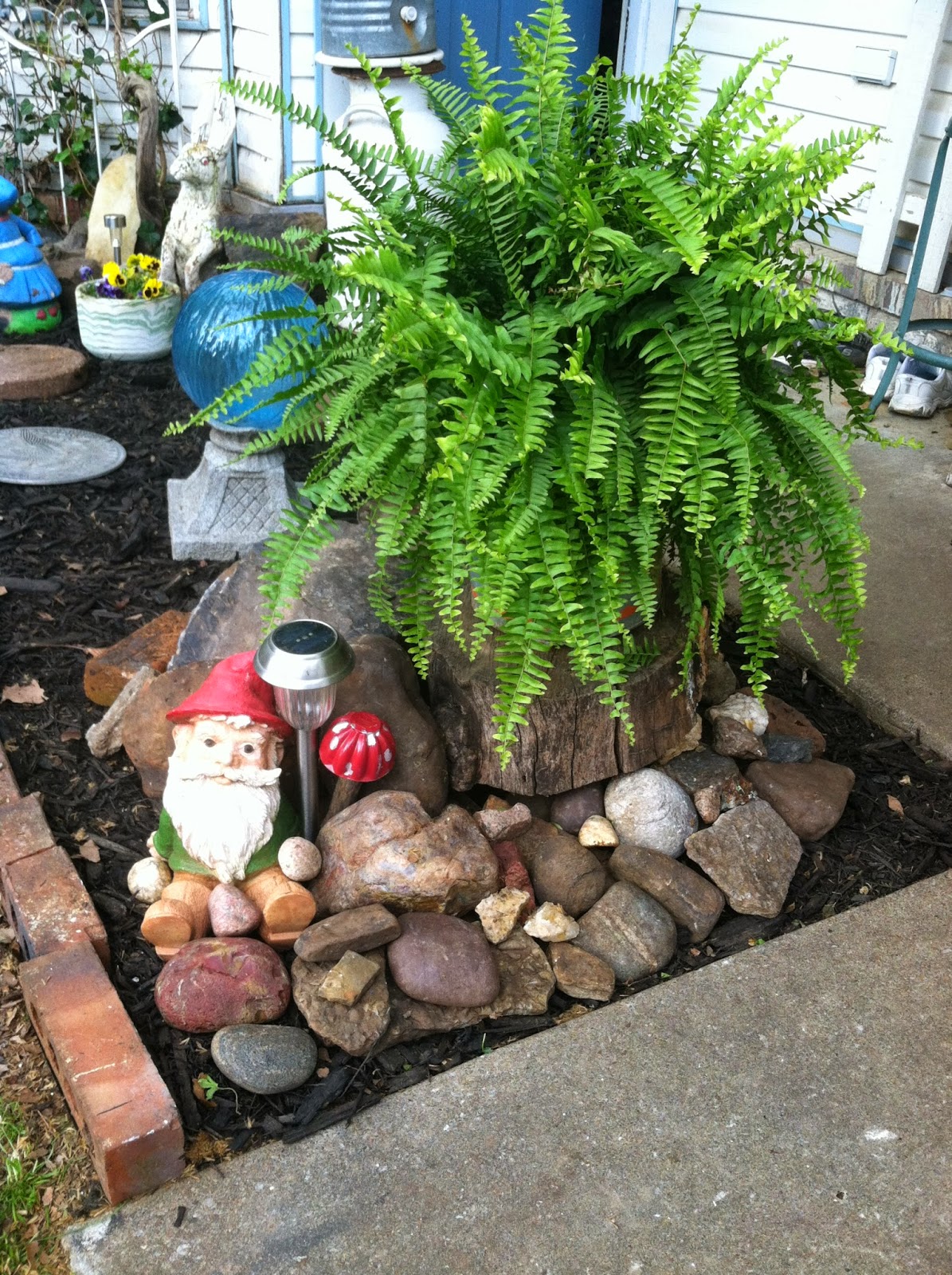 Every time we go somewhere - a vacation, a day trip or even just walking on the creek - we find one special rock to bring home.  Sometimes we find many rocks, but we really try to find one special rock.  We like rocks that are shaped like things (bonus if they are heart shaped) or have unique features.  Fossils are great, quartzy rocks are good and colors are great too. 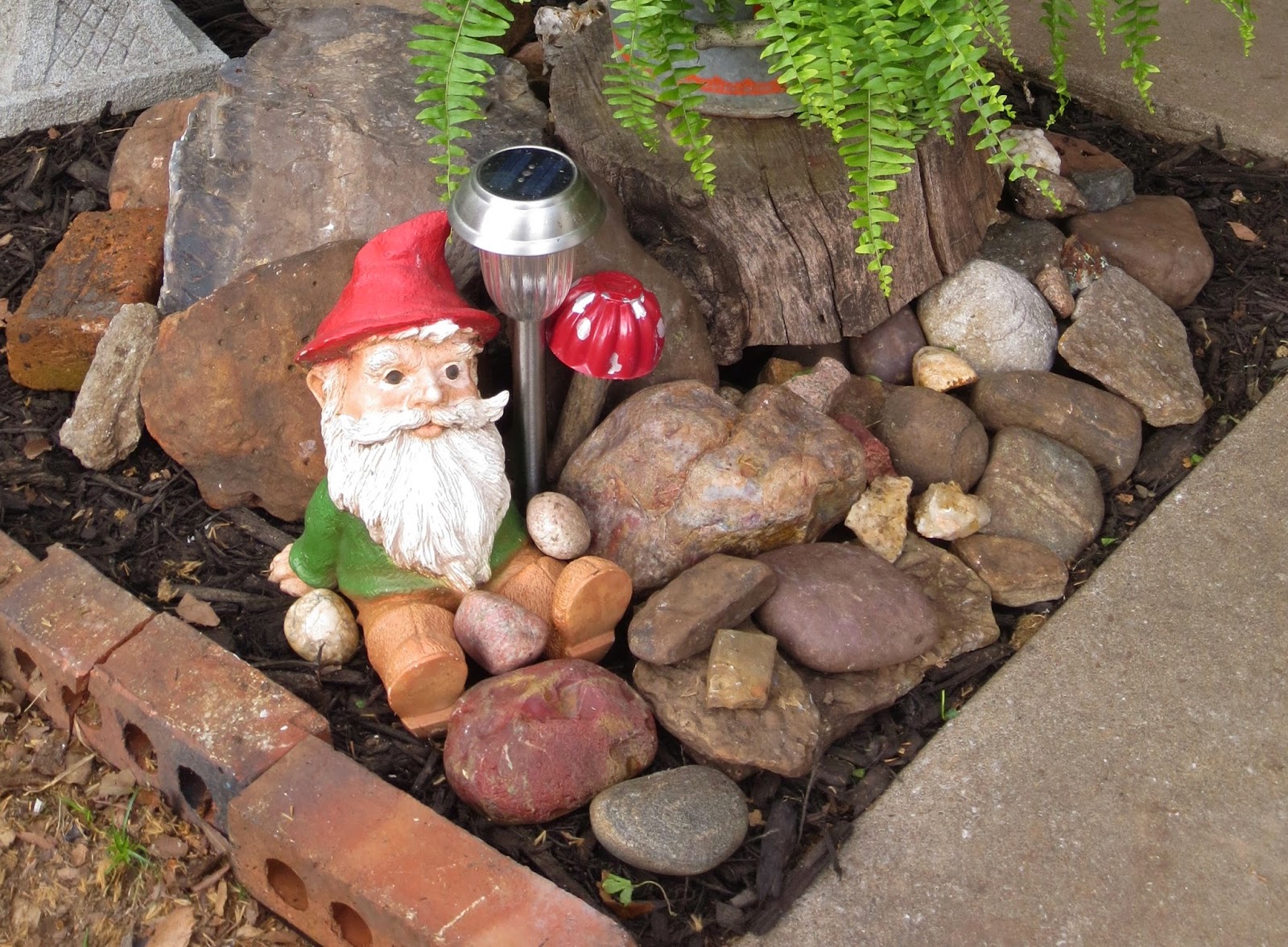 Each rock is a memory and is special.  I do remember where a lot of them came from and the ones that I don't - well, I still know it was a fun family day.  Behind the gnome, there is a huge piece of petrified wood that has been in our family since the 1920's. 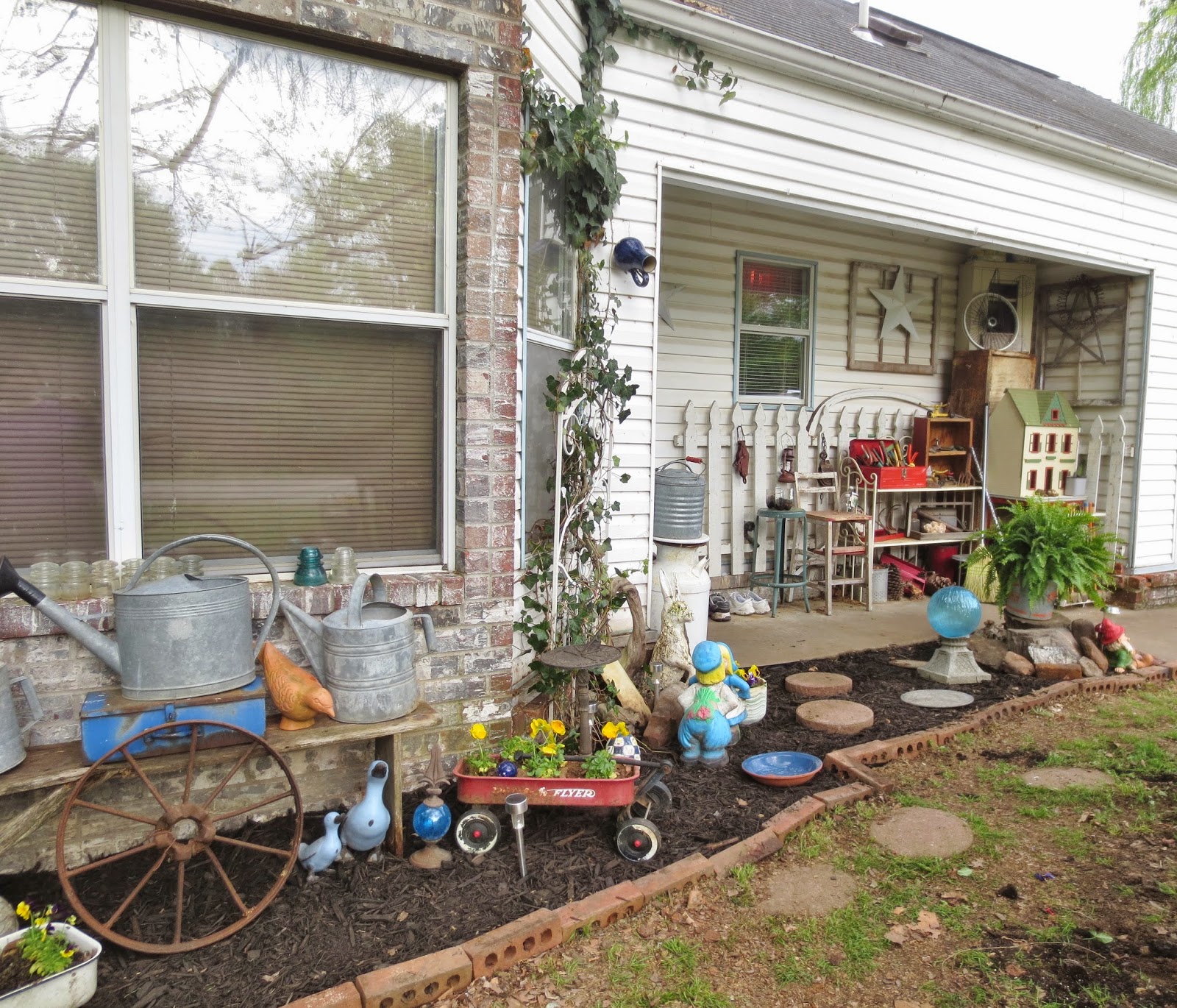 I have a lot of things out there.  Each one found at a yard sale or better yet, curbside.  We even scrounged the bricks from a dump site when they built a house behind ours.  A storm came up before we got the bricks reset straight - that is a job for another day. 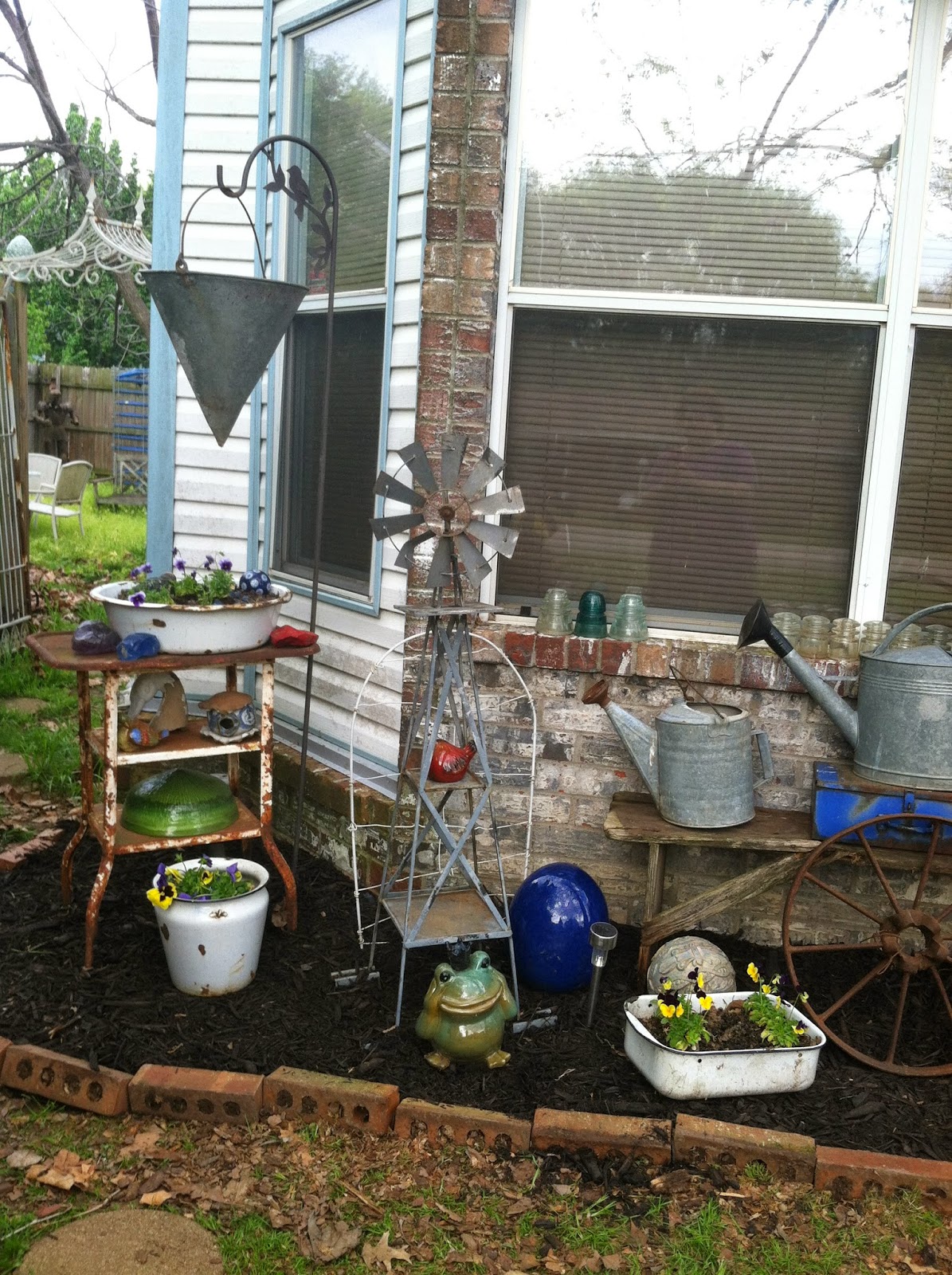 See that cone bucket on the Shepherd's hook?  I never knew what that was until we toured a Trolley Museum and I saw one in a display.  It's a fire bucket for trains and Trolley's.  When you throw the water, it goes out in a big circle to cover more area than a normal bucket.  Cool, huh?  I got mine at a yard sale for $2.00.  I've been buying old junk since before it was the cool thing. 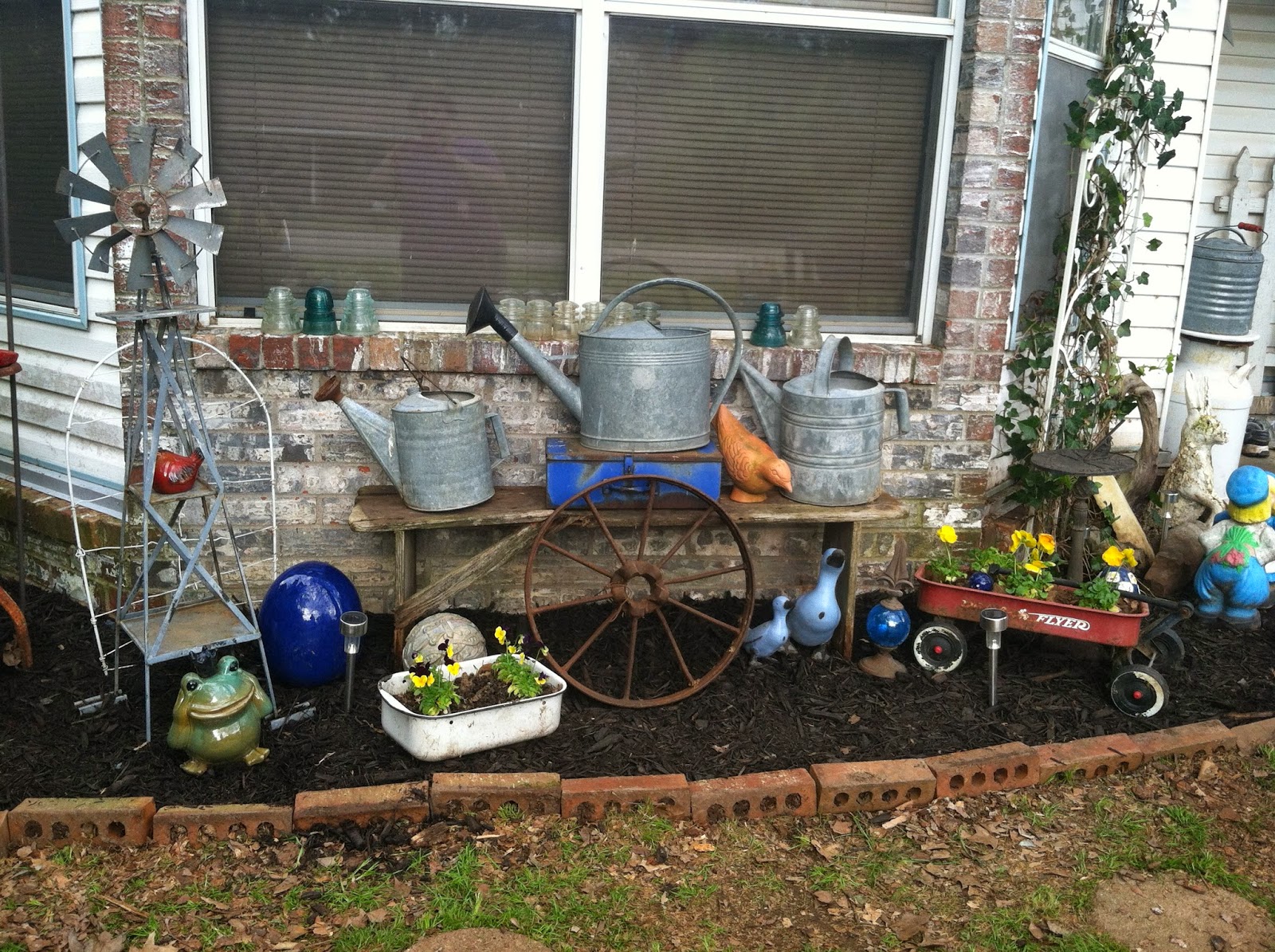 I'm always on the hunt for old watering cans, but those three are the only ones I have ever found.  The big iron wheel weighs a ton.  I found it at a barn sale.  The man told me it was $2.00 if I carried it to the car or $10.00 if he carried it.  Guess who carried it? 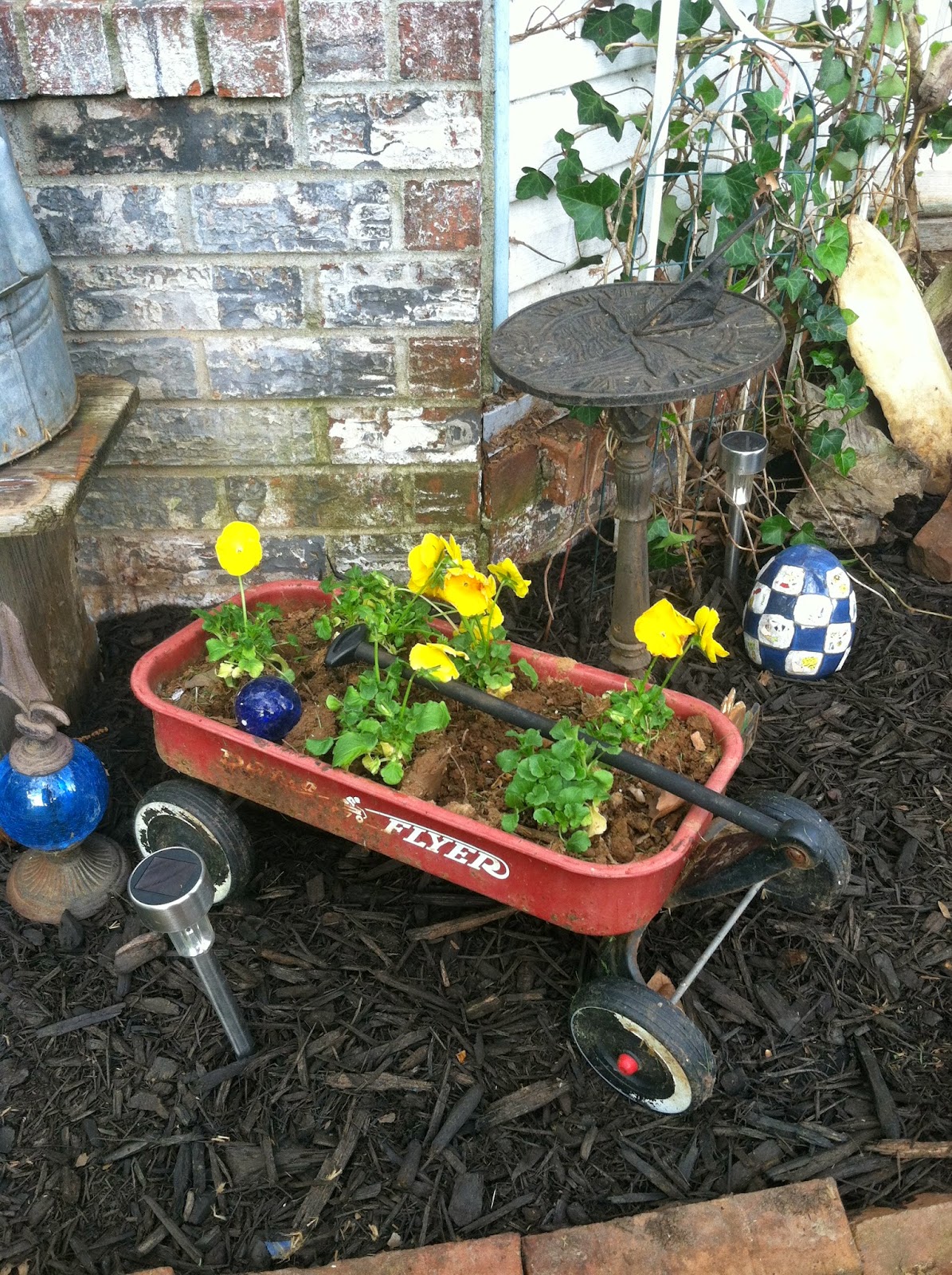 The Bean's old wagon full of flowers.  I don't know why, but this particular variety of flowers were all in the markdown section for $3.00 a flat.  They were still beautiful too! 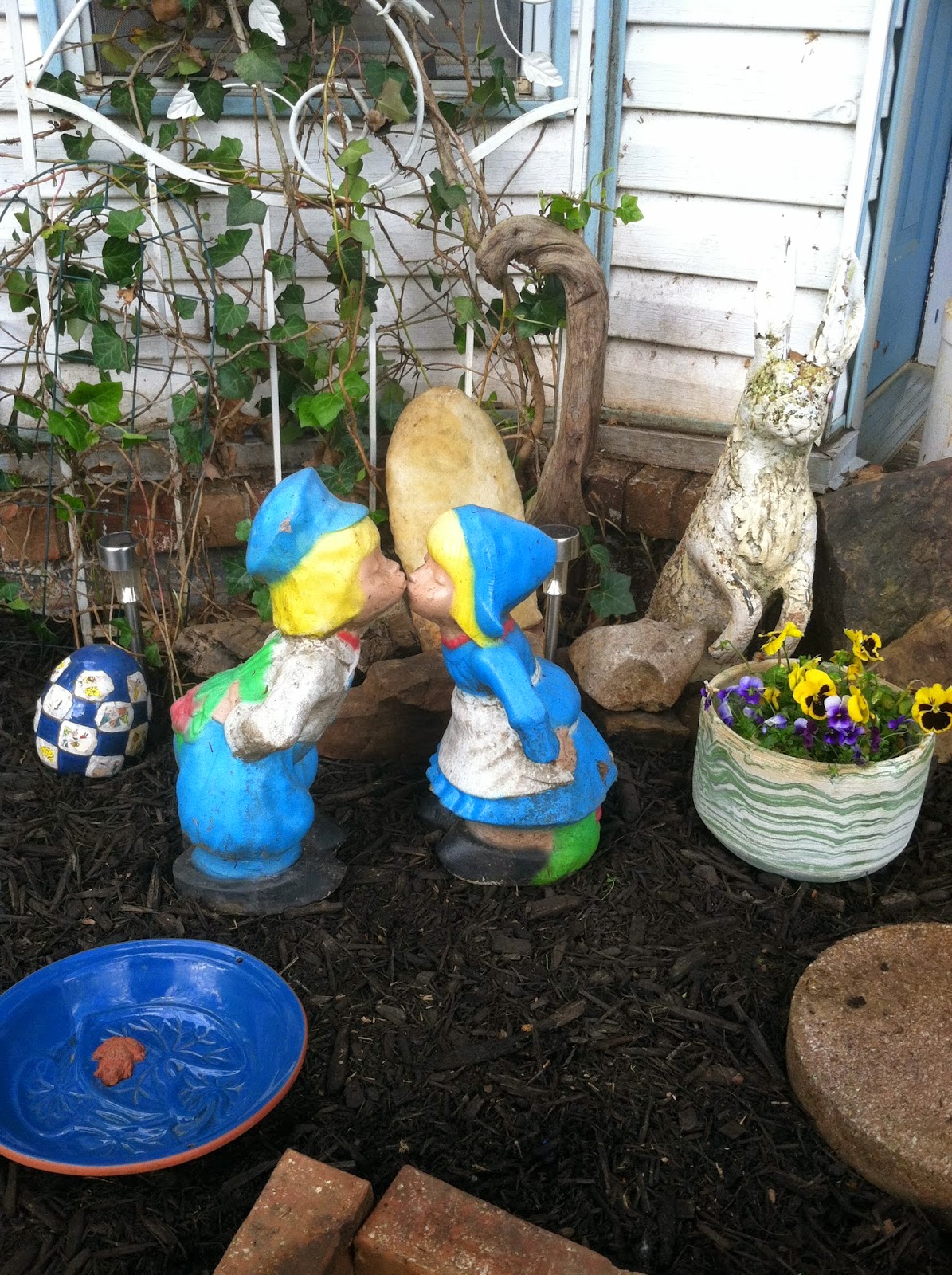 I like pops of blue in the yard. The Dutch kissing couple was thrifted and meant to be resold.  But they are heavy and they look cute there so I guess you can figure out the end of that story.  That poor, poor bunny.  He is on his last summer, I think.  He is so very old - bought from under a table years ago - but so much older than that.  One summer I looked out and HE WAS GONE.  Someone has stolen him while he was still in his prime.  I put a sign on the mailbox saying he had been STOLEN. Two days late, he magically reappeared - missing a foot, but not harmed otherwise.  I never did know the rest of the story. 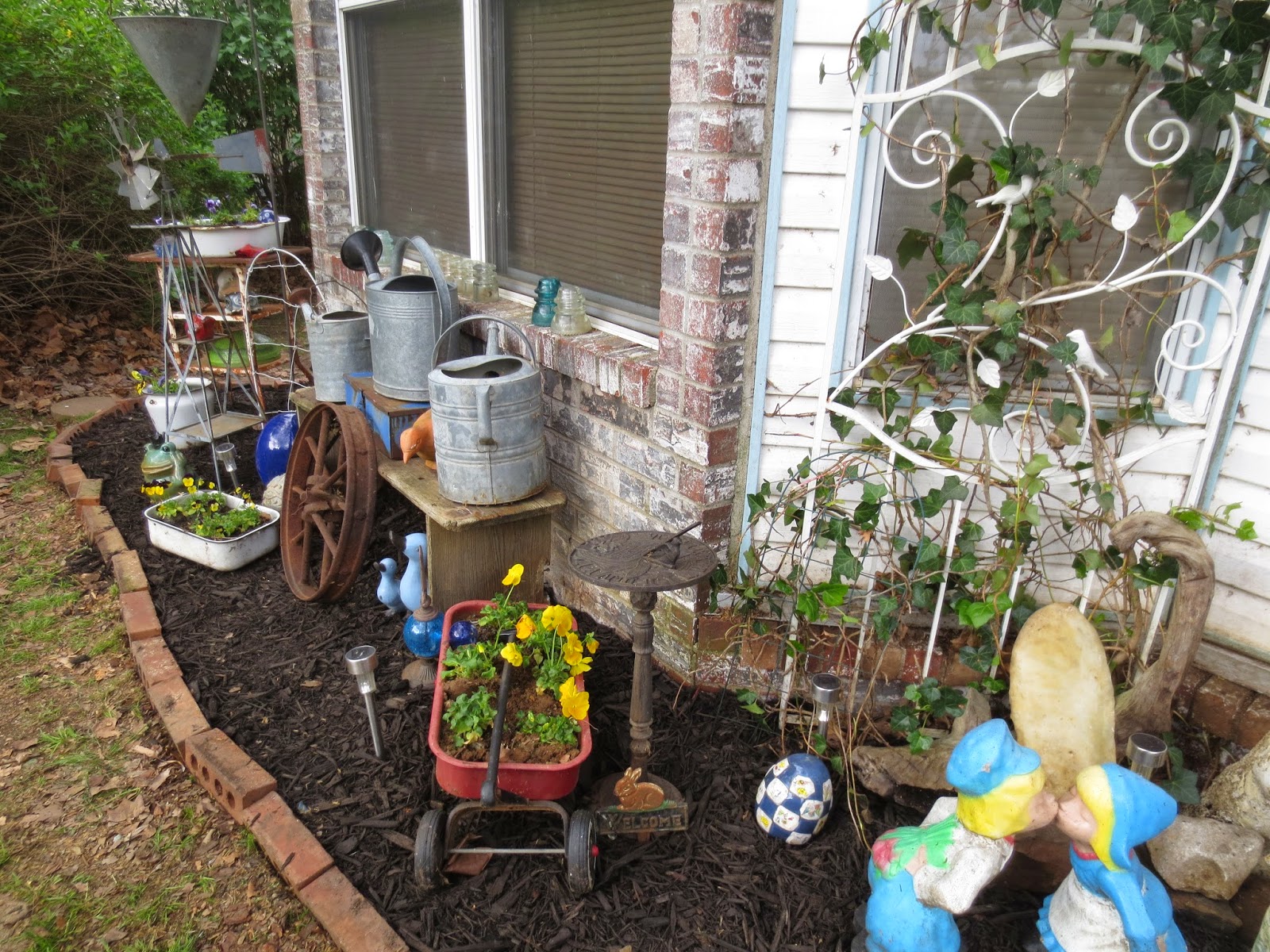 Whenever people walk by on the sidewalk, I see them stop and look at things.  They might be thinking it's a glorified junk heap, I don't know.  But, I think they like my things.  At least, I hope they do.  And if they don't - phooey on them.  (Did I ever tell about my new neighbor that moved in last fall?  He came and cleaned up the trash in their yard that the previous tenant had left behind - but continued on into our yard across our property line and threw away my park bench, birdbath and the giant toadstools I had made plus he ripped out all my flowers and a big grapevine I had cultivated on our fence.  After a call to the Police to report the theft, I approached him and he said......wait for it......he said that I should THANK HIM for cleaning up all my junk. Never apologized once. He is not my friend.) 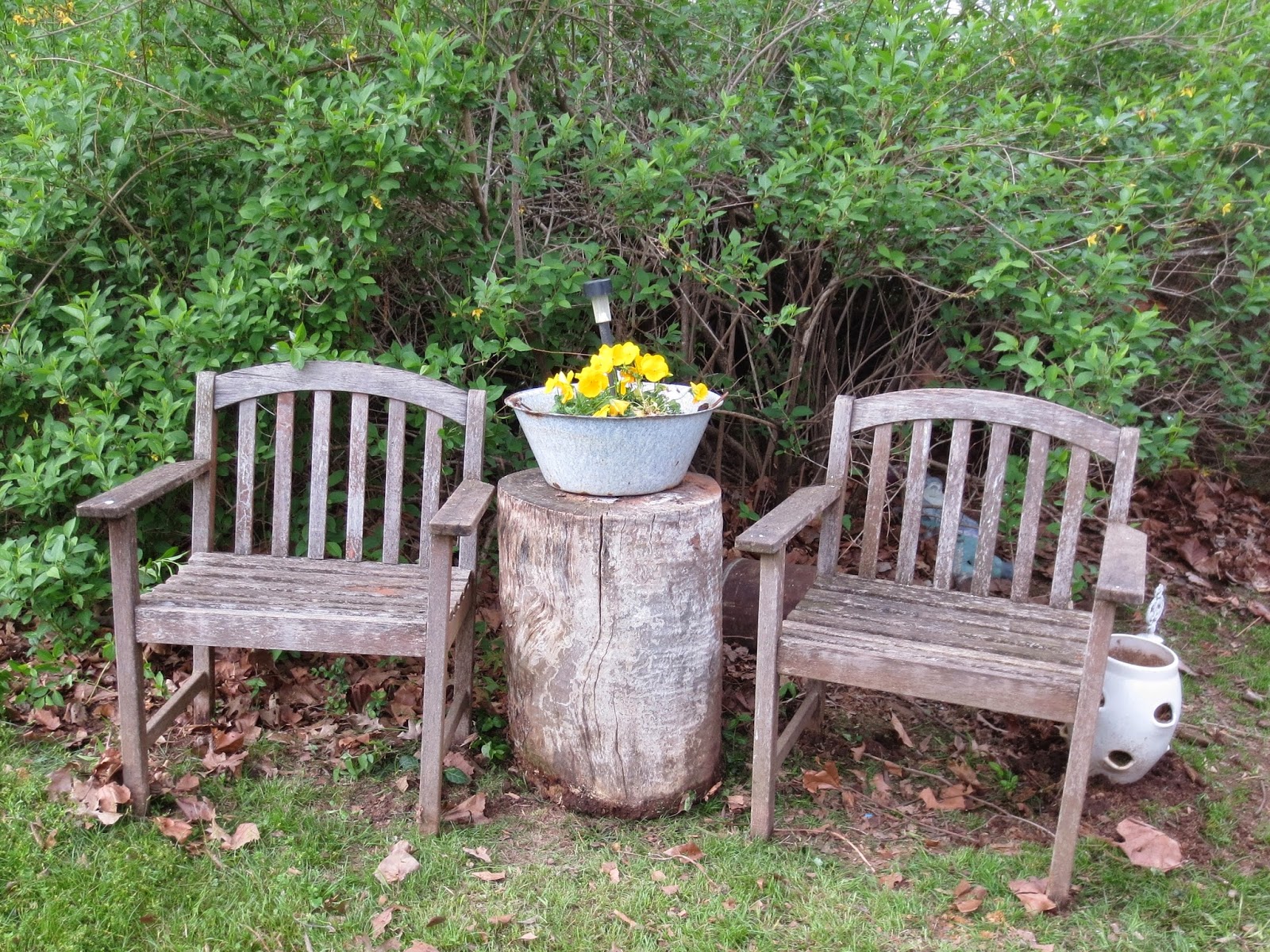 If you're ever in the area - stop on by and sit a spell!  Then we will get up and make both the back yards and the side yards look pretty too!  Bring your work boots!  :)
Posted by Shara at 11:52 PM