The Week in Junk: Gifts, Junk and Sickness too

Hey guys.  Here I am - nine days without a post.  I have had a really bad case of dontgiveadamn. You ever had that?  I am busy all the time, seemingly I can't keep my head above water, with chores, responsibilities,  and the to-do list for both booths and the Junk Ranch which is rapidly approaching. Then, last week I woke up with the WORST sore throat ever.  I mean EVER.  I was gagging and couldn't talk - I looked down my throat and my Uvula was about four times bigger than normal so it was laying on the back of my tongue.  Cue the gagging.  The next day it was better and the day after that it was back to normal in size, but the sore throat remains and now I have a drippy nose, terrible chest congestion, a horrible hacking cough and practically no voice at all.  I am a real pleasure.  :)

Recently I agreed to do all the social media posts for the store where I have my big booth, so I am taking photos, editing them and trying to come up with clever posts for that.  I also agreed to a make 25 pendants for the Junk Ranch to put in "swag bags."  Making the pendants was actually quite quick and painless, but deciding on what to put on them took me forever.  I couldn't find a graphic that I liked online, so I decided that I CAN DO THAT.  I opened this fancy Serif Drawing Plus program I have on my computer and started importing photos and graphics and BAM I had an idea I actually liked. 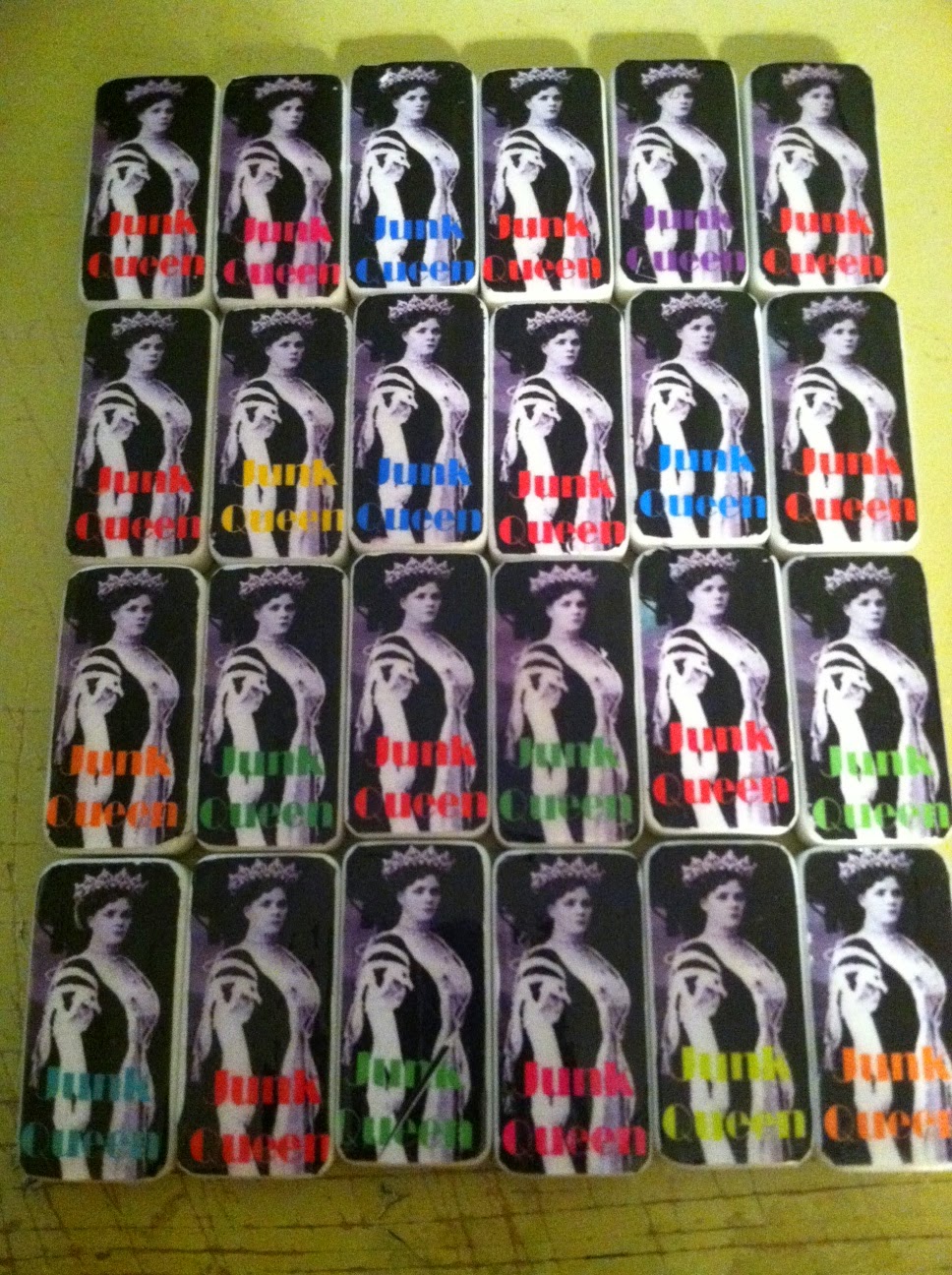 I had a different image that I ran my Amy originally, but I like this one better.  (I hope you do too, Amy???!!)  I also decided that maybe people would like to use it as a key chain instead of a pendant, so that's what I did.  Way to go the opposite of what I promised, right?  But, I like it better and I think the key chains for the swag bags are a better idea anyway.  *fingers crossed*

About a week ago I went to a bunch of thrift stores up in the next county.  I came home with very little - I didn't take any photos and frankly, I can't even remember what I did buy.  Sad, right?  But, when I came home there was a big box sitting on the doormat.  It was from my second cousin and his wife.  We are FB friends and see each other once every five years or so.  So, I really could not imagine what they had sent me! 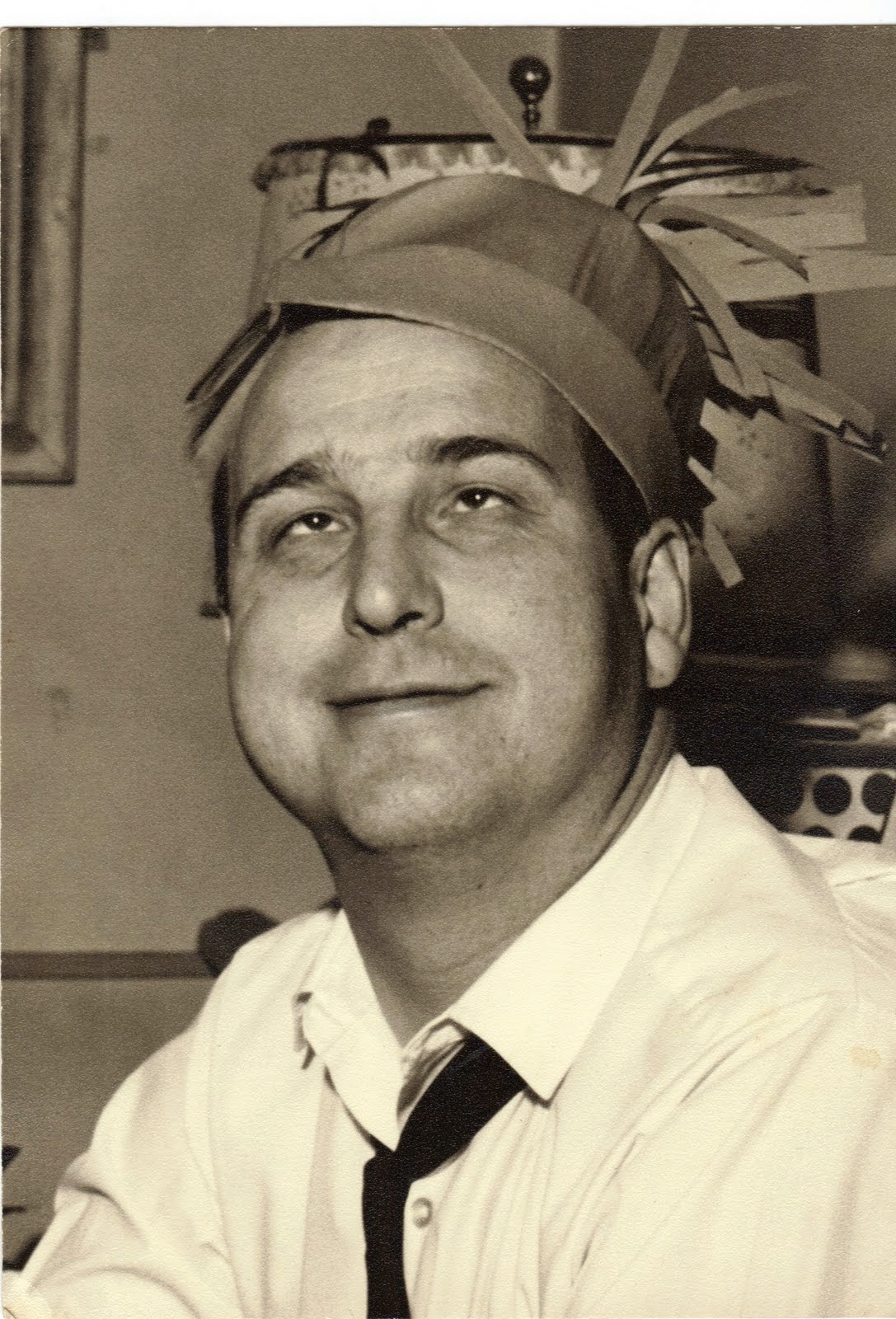 His Dad, my Great Uncle Murlin, died late last year.  He was a fun guy, very smart - an Architect, a Dean at OU, a Navy vet, and just the nicest man.  This is my Great Grandparent's (up in the header) son - my Grandmother's brother -hence the traditional paper party hat.  Anyway  - when I opened the package, I was in tears. 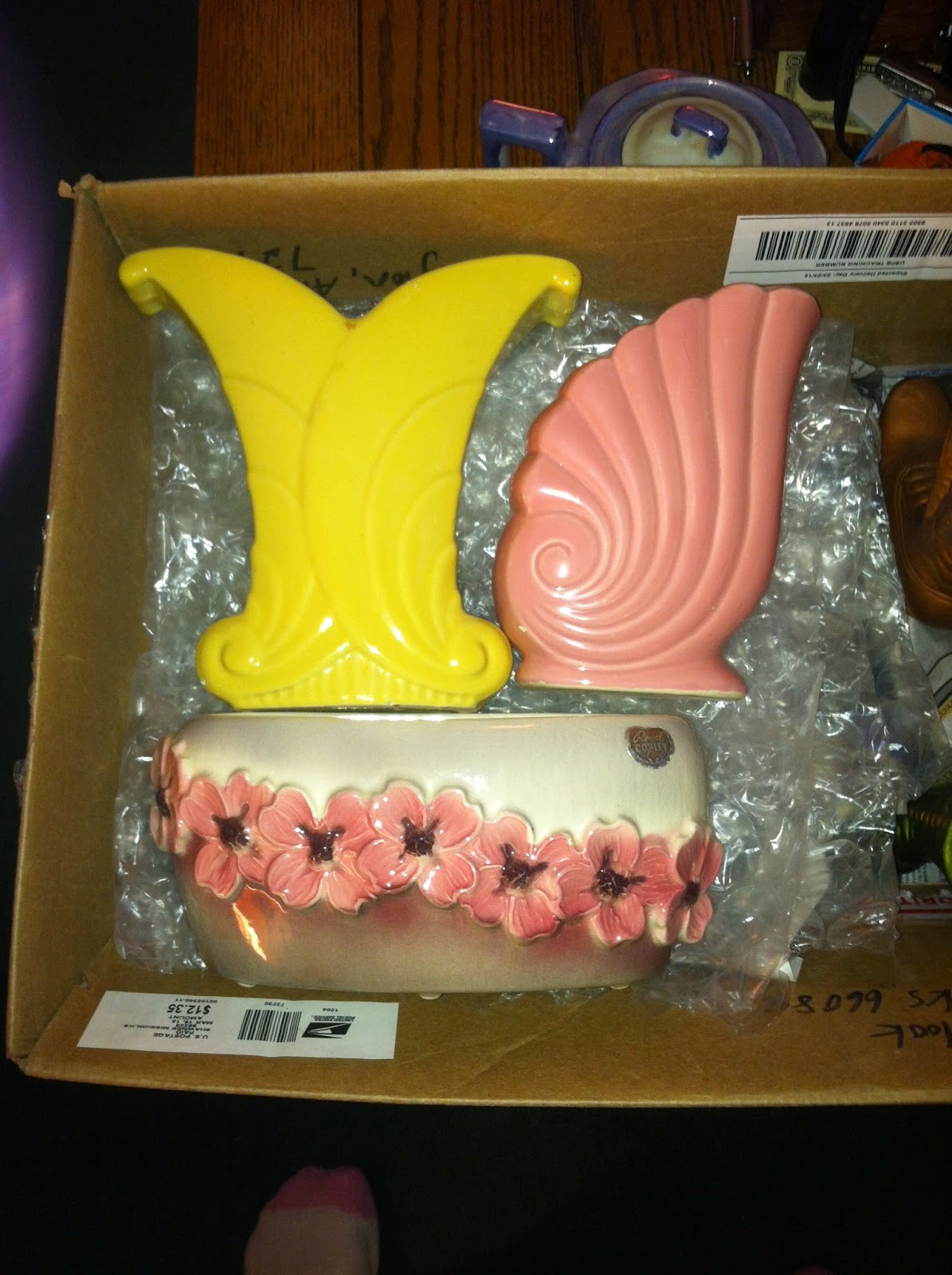 Pottery.  Beautiful pottery.  Pottery that either belonged to him and his wonderful wife or pottery that belonged to my Great Grandmother - we aren't sure which.  He had kept it in many houses, many moves, different states and even in his tiny room that he had in their house at the end.  It was special to him.  They had seen my pottery collection on Facebook and wanted me to have these family pieces. 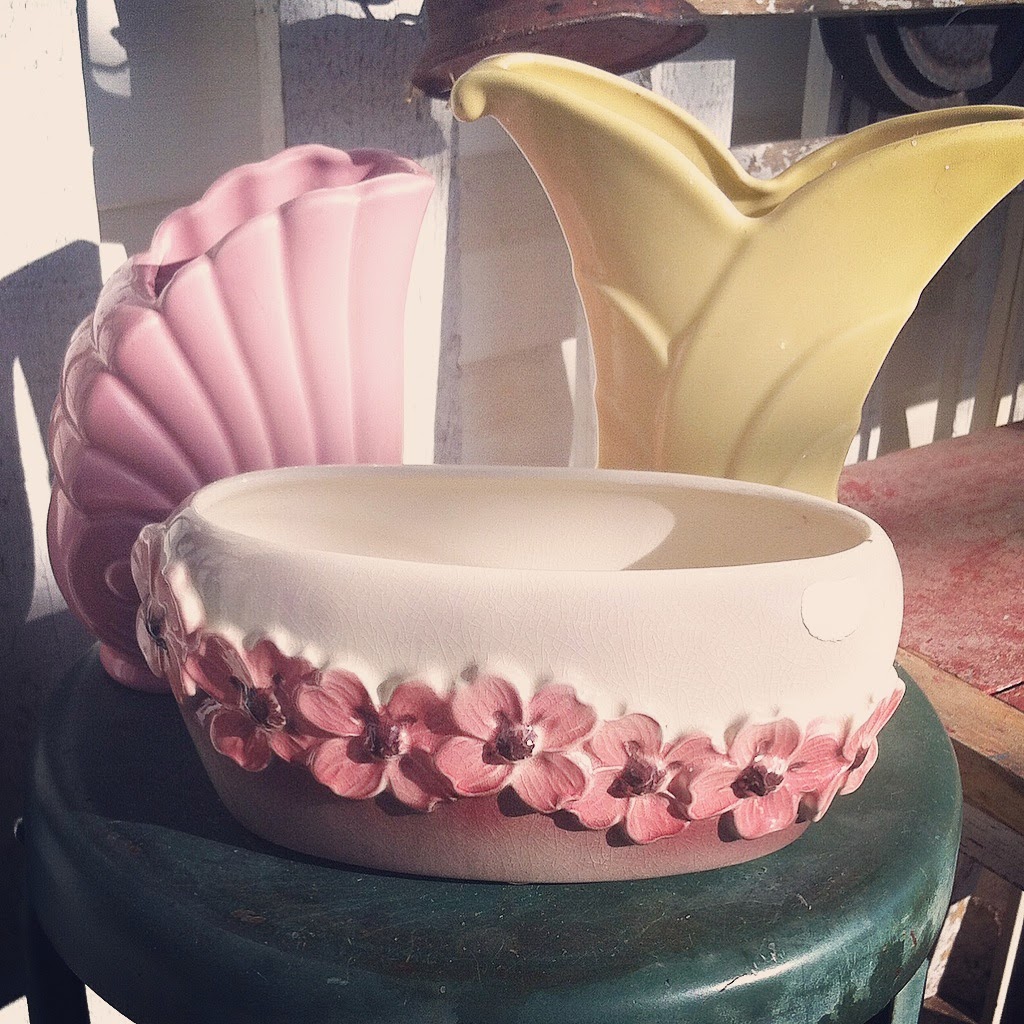 If I had found these pieces out thrifting, I would have been excited.  But, to have received them as a gift and knowing they are family pieces, is just wonderful.  And, seriously, PINK and yellow - could they be any more perfect?  They are pristine with the original tags.  Just lovely. 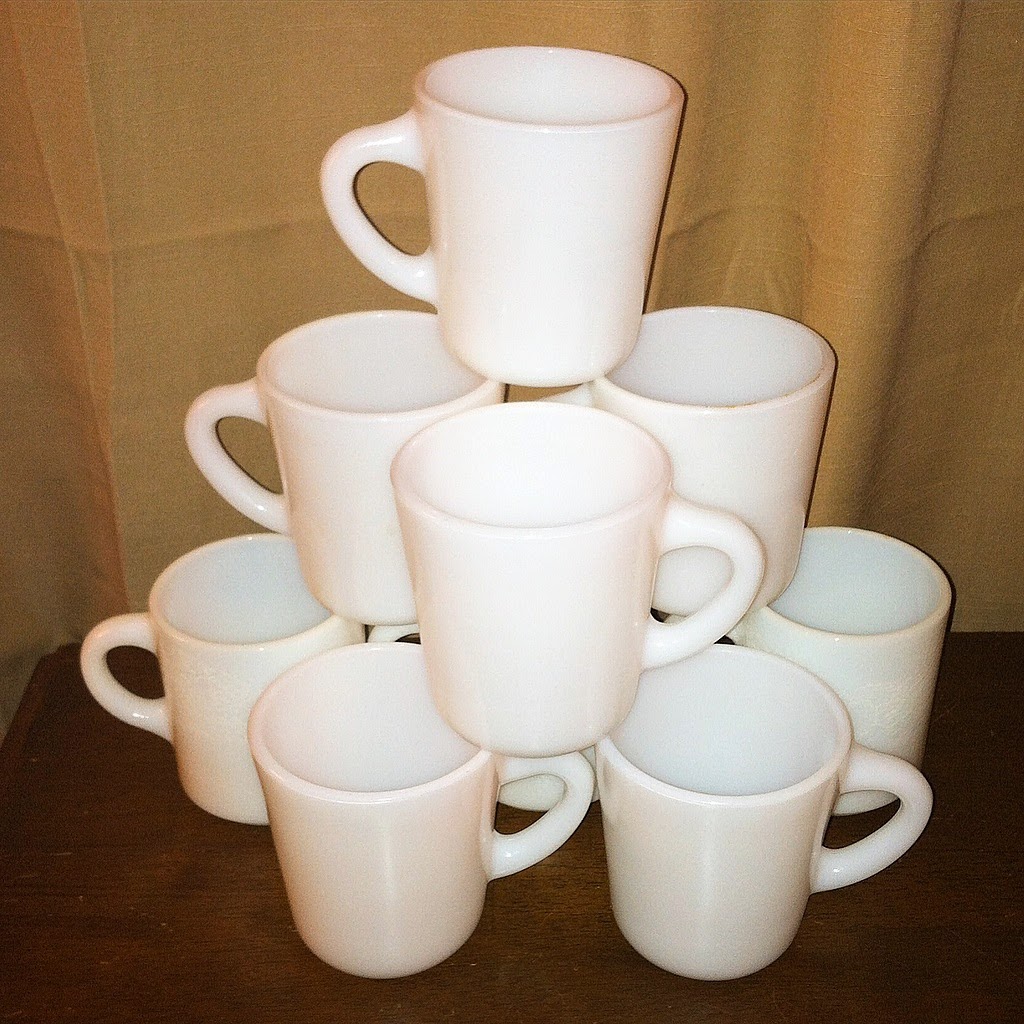 I stopped in a Goodwill about 7:00 on a Saturday night ('cause that's how I roll) and was surprised to find all these old glass restaurant mugs scattered about the shelves.  They were 50¢ each, which for our Goodwill is a steal.  They will go to the booth or the JR. 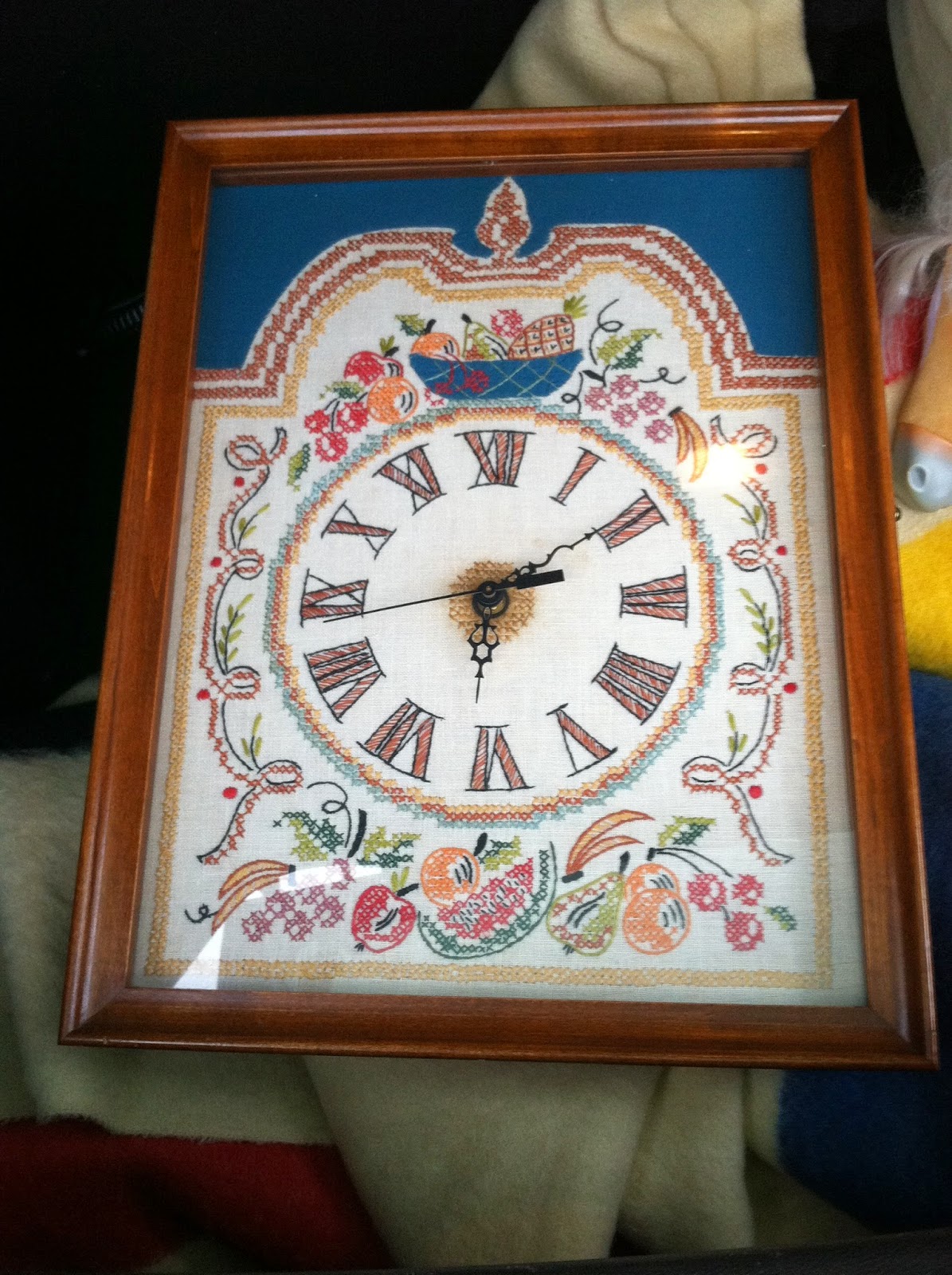 This clock is in an older clock case that opens.  It is all needlepoint. 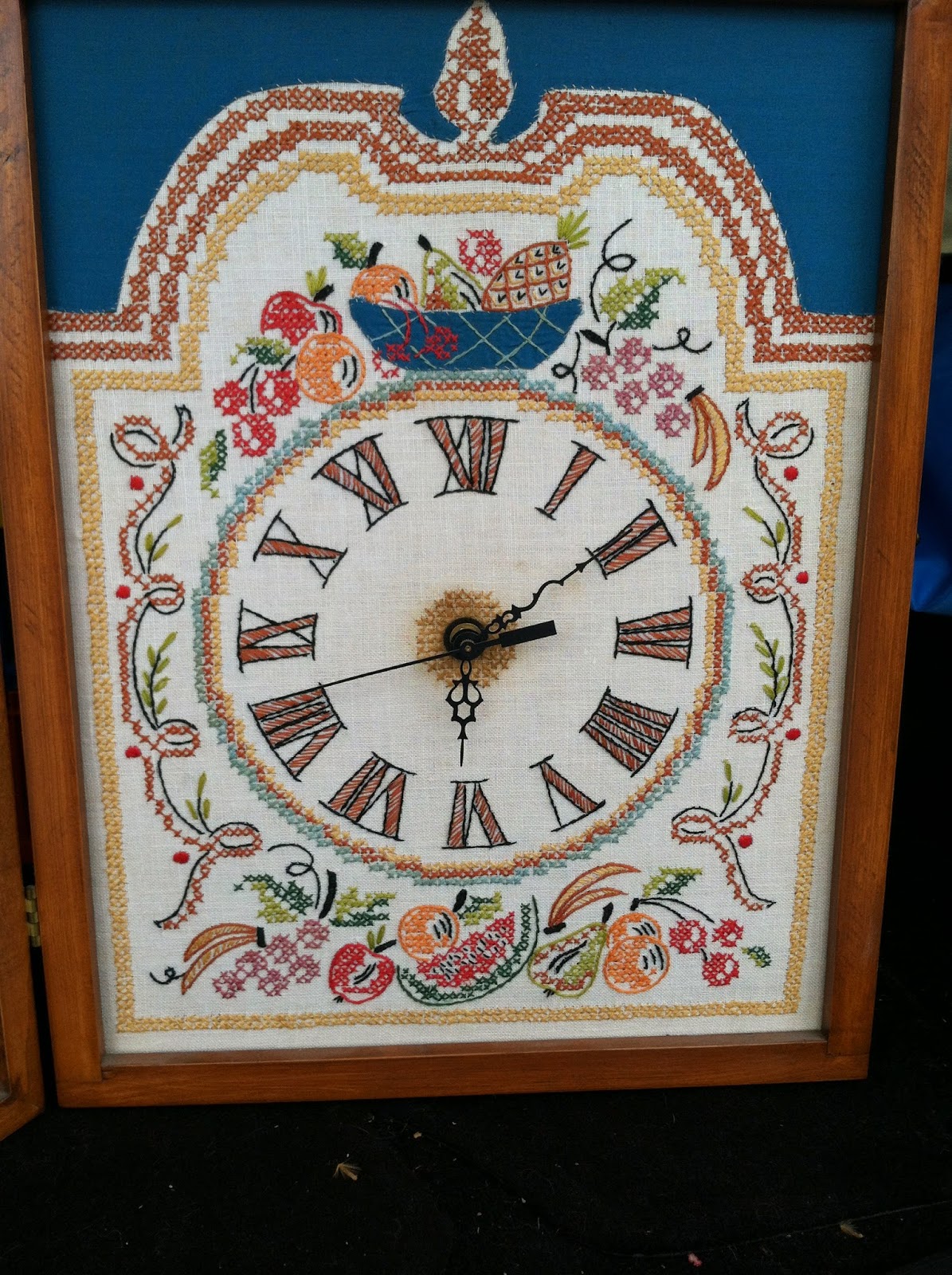 I think it's neat and I hope it will sell.  Someone worked so very hard making it. 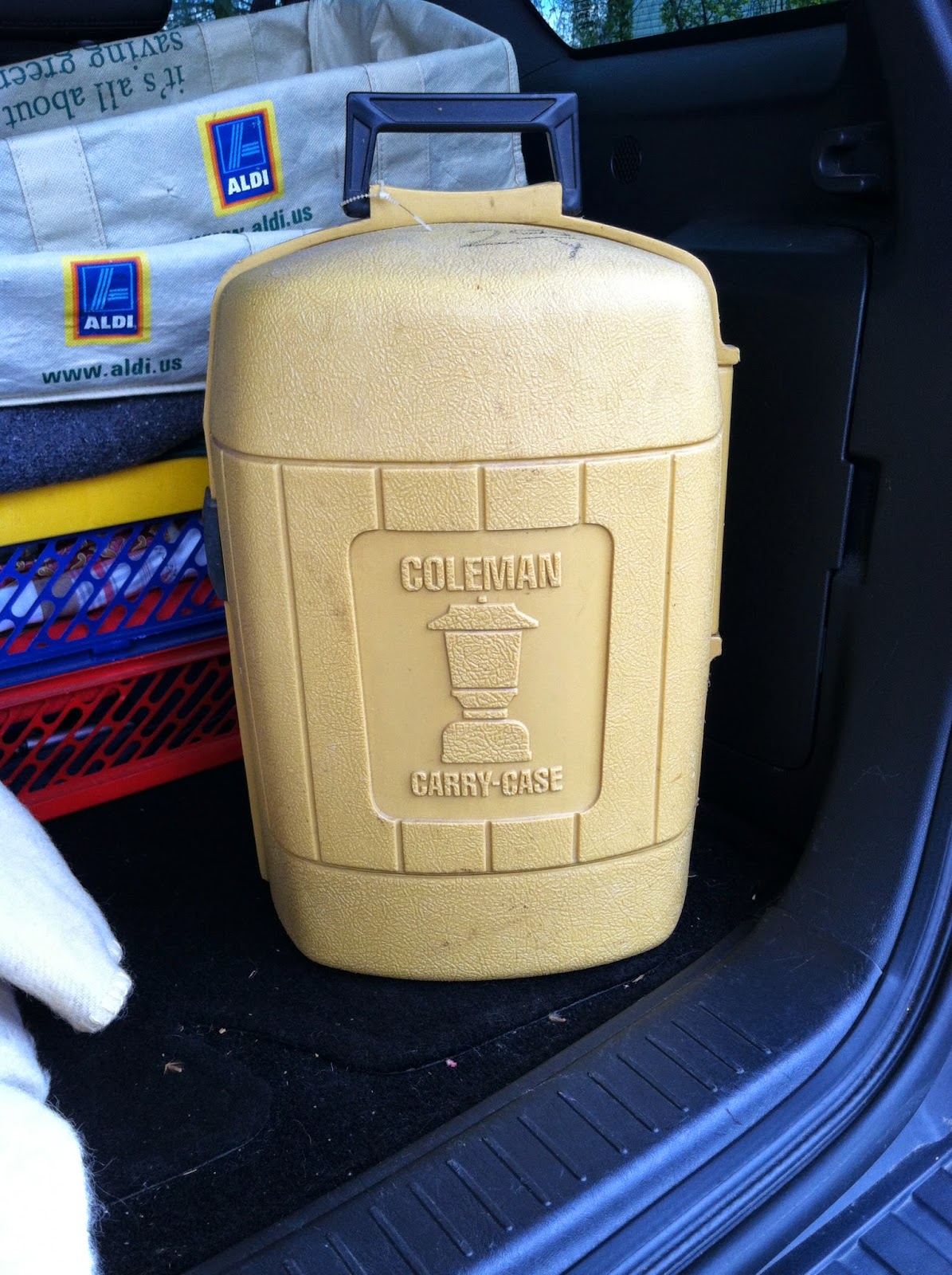 I found this on the late night GW run too.  I had hoped there would be a Coleman lantern inside, but it was empty.  Oh a whim, I did a quick ebay search and found that one had sold for $110.00.  An empty case!  It's sort of big for shipping, but really light, so I don't think it will be that bad.

Speaking of big things to ship - I was on a roll with that this week! 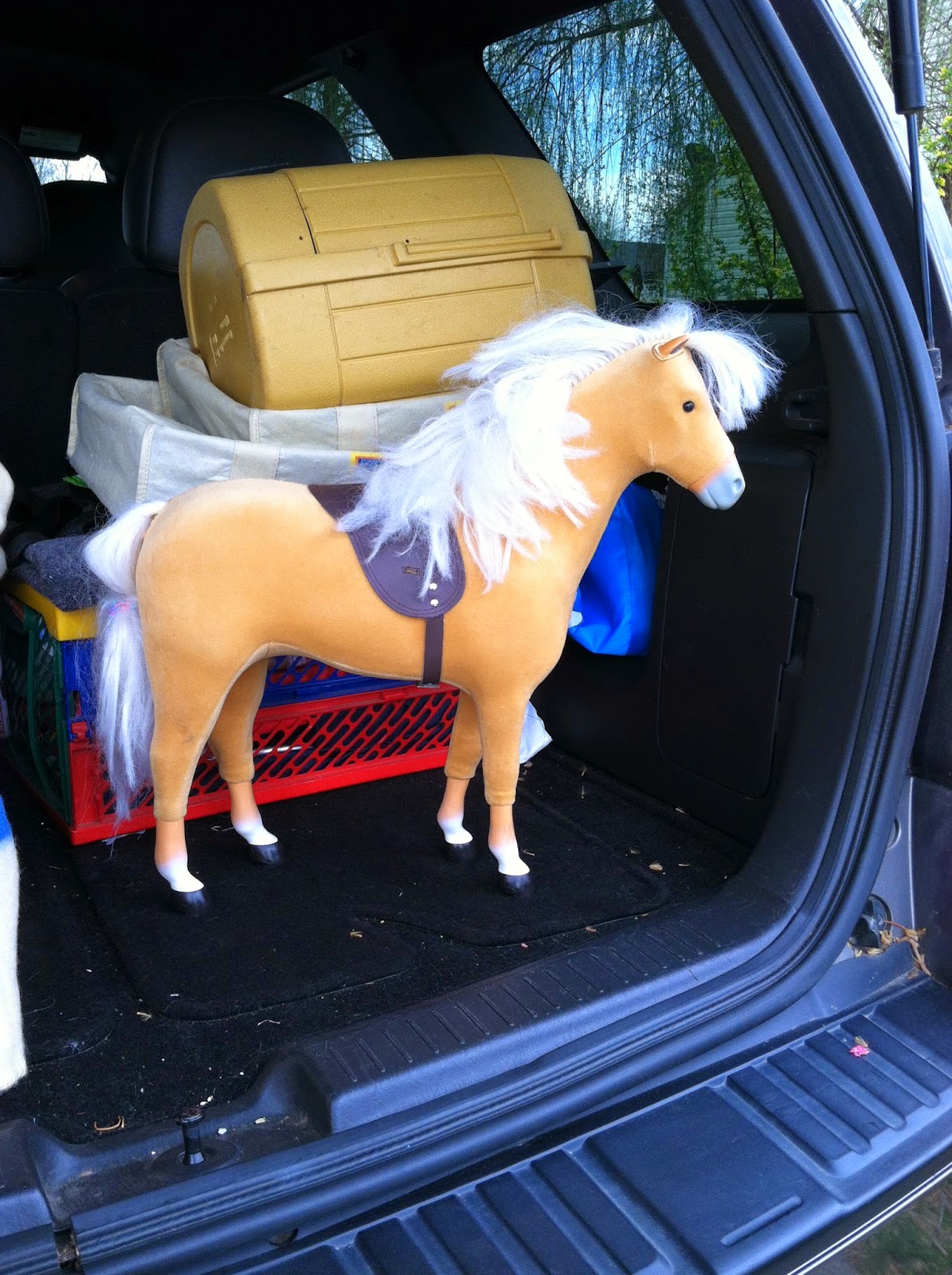 I spotted this America Girl pony at the thrift - did a quick search and decided she was worth selling. I'm going to need to find some big boxes this week!

And one last silly find that I think is super fun.  When I set up at shows, I always joke that I have everything except the kitchen sink.  Well, now........ 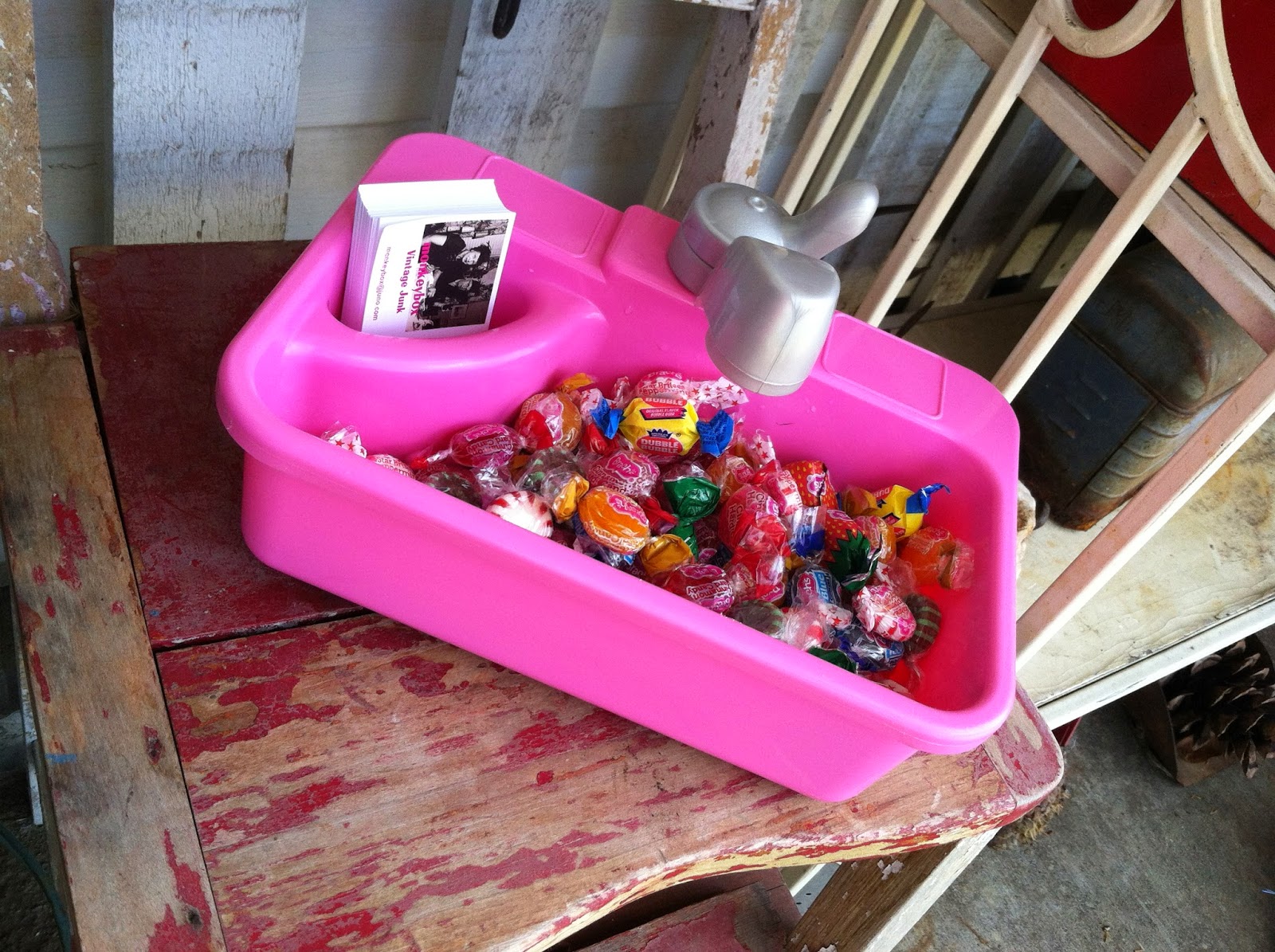 I have a kitchen sink.  :)  Just a toy, but it was only 25¢ and it is PINK, so there you go.  It holds my business cards and some candy perfectly.  I think it will be fun on the check out table.

Thanks for those of you that checked on me - that means a lot to me.  You guys are the best!  Now for some Nyquil and some Zzzz's!
Posted by Shara at 11:30 PM