The Breadman came straight home from work and took a nap and The Bean was resting on the couch, so I announced I was going to the booth for a bit.  I ended up being gone about four hours! I went to several yard sales and found Lara at my booth (!) so we shopped around a bit at my store and at her store.  Plus I did take in a bunch of new things and reworked the booth.  I thought there would be a lot of yard sales, but there weren't that many.  Tomorrow looks like there will be a LOT, but not sure if I will go or not.  I'm saving up for next weekend  - NWA Largest Yard Sale. 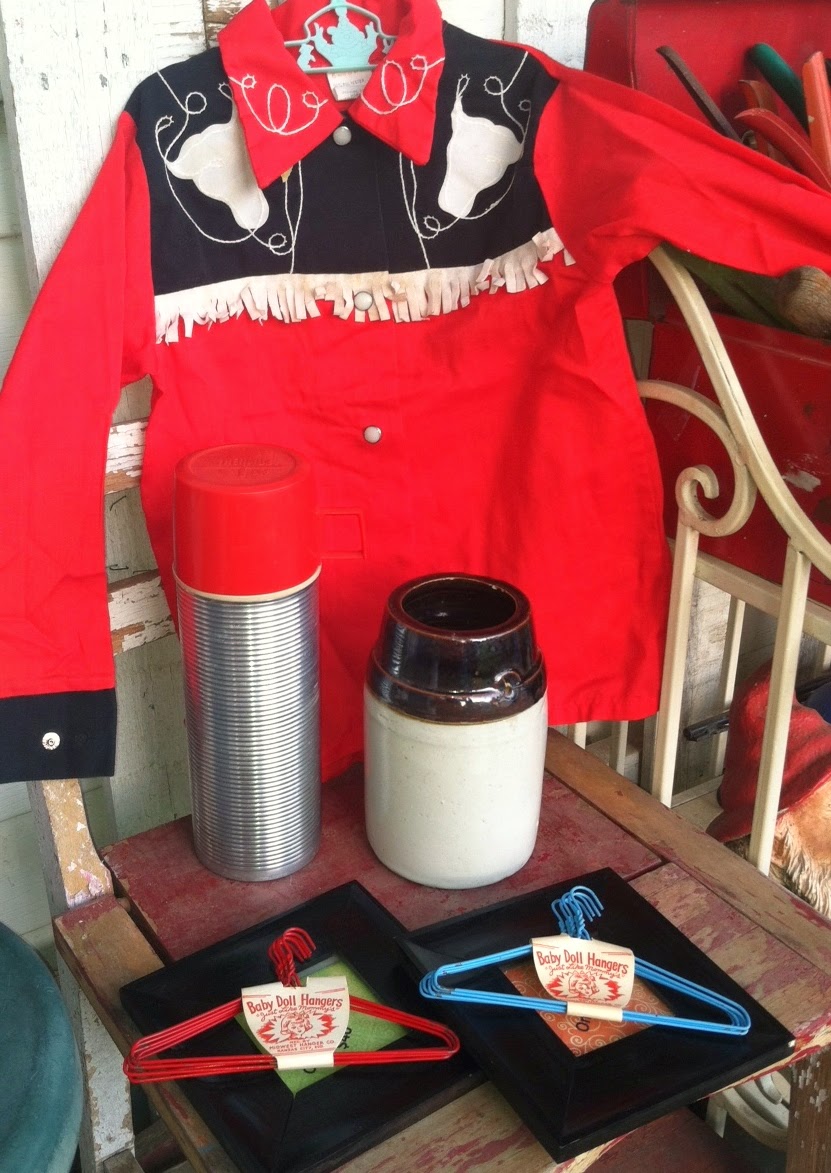 I just found a few tings, but sometimes that is just the little bit of a high that you need to get through the day.  I also bought a vintage metal medicine cabinet with a mirror that I cleaned up and put straight in the booth. 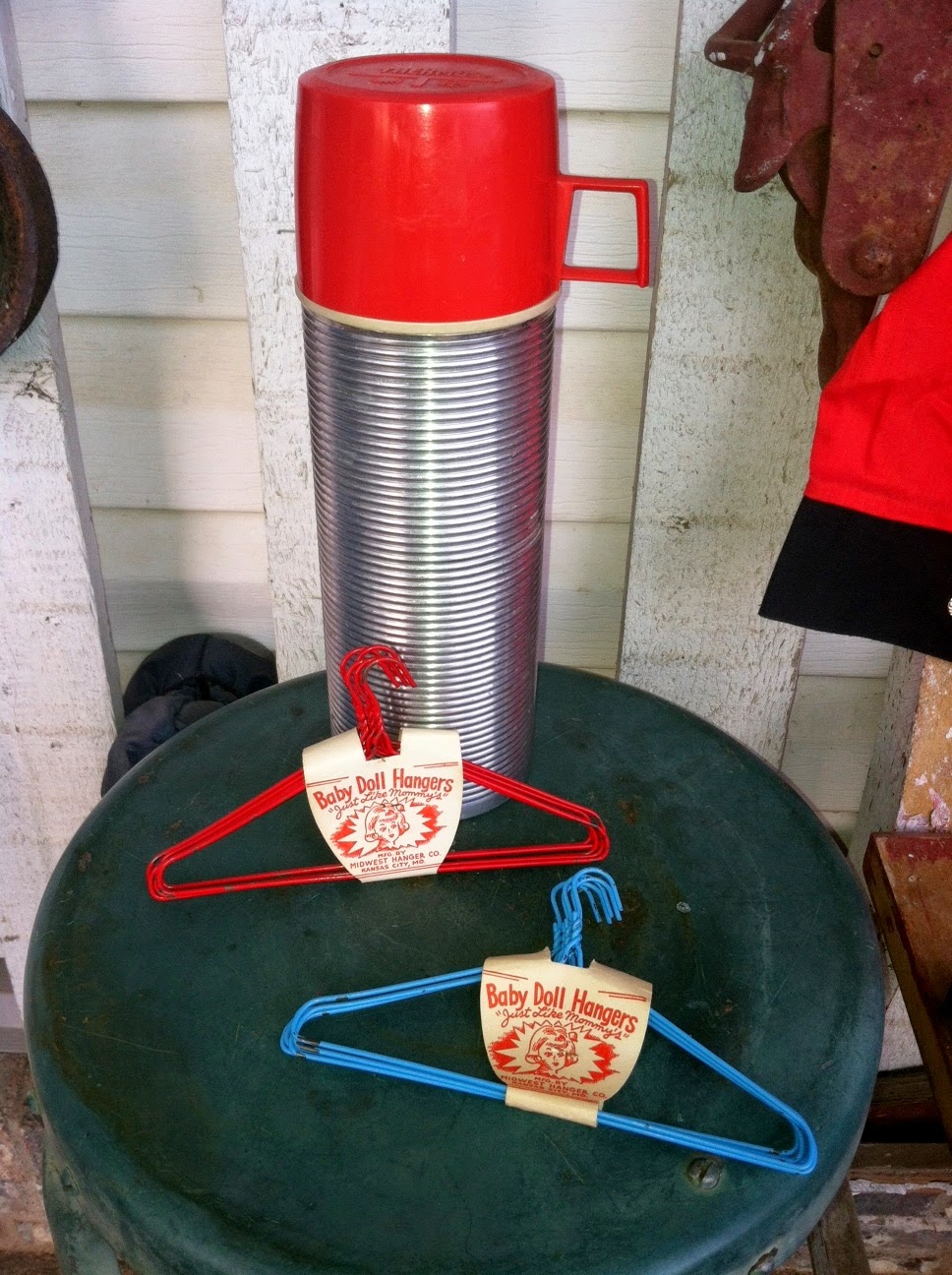 I was shocked to find that neat old ribbed metal Thermos at a sale in the middle of the afternoon.  And it was only FIFTY CENTS.  Score!  The old Baby Doll hangers were at the Flea Market. 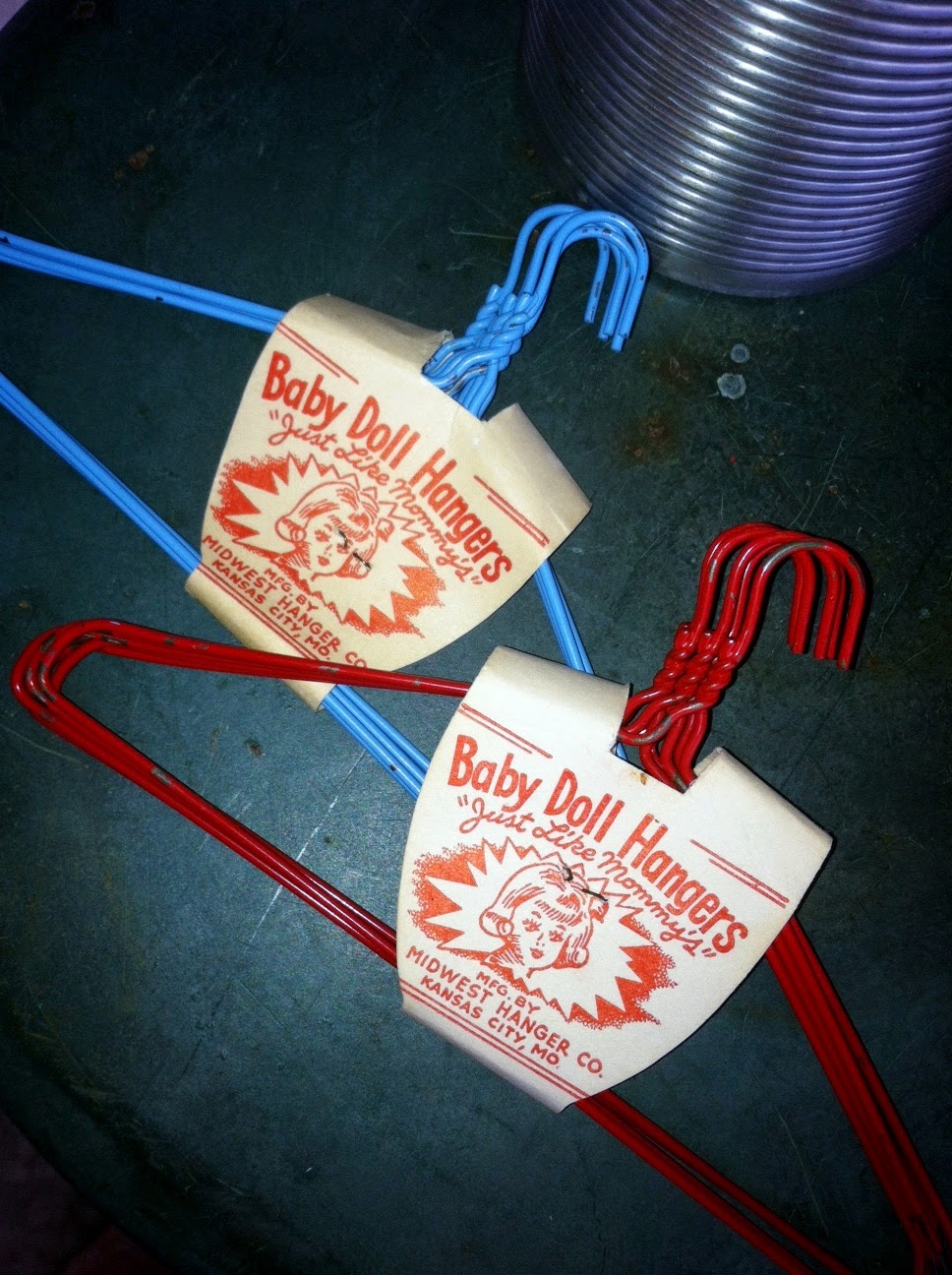 I paid more for those than I would have at a yard sale, but I just could NOT leave them behind.  SO CUTE.  I might, and when I say "might" I mean I don't want to, but I might sell one set.  [I DON'T THINK I CAN DO IT.] 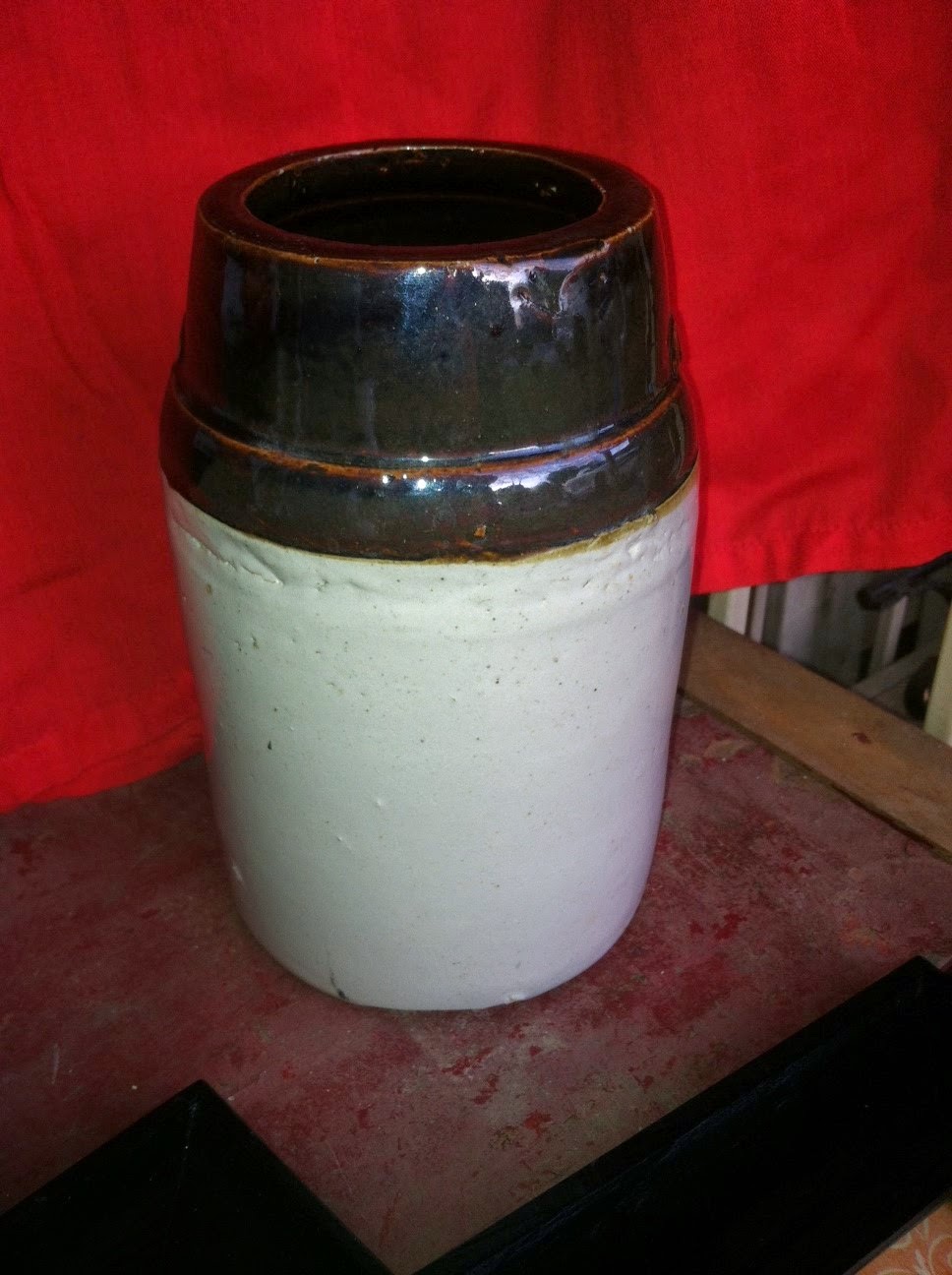 This old crock was only 25¢.  I have no idea what it is or was, but any old piece of crockery is coming to my house when it is a quarter.  It will end up at the booth or the Farm Fresh Sale. 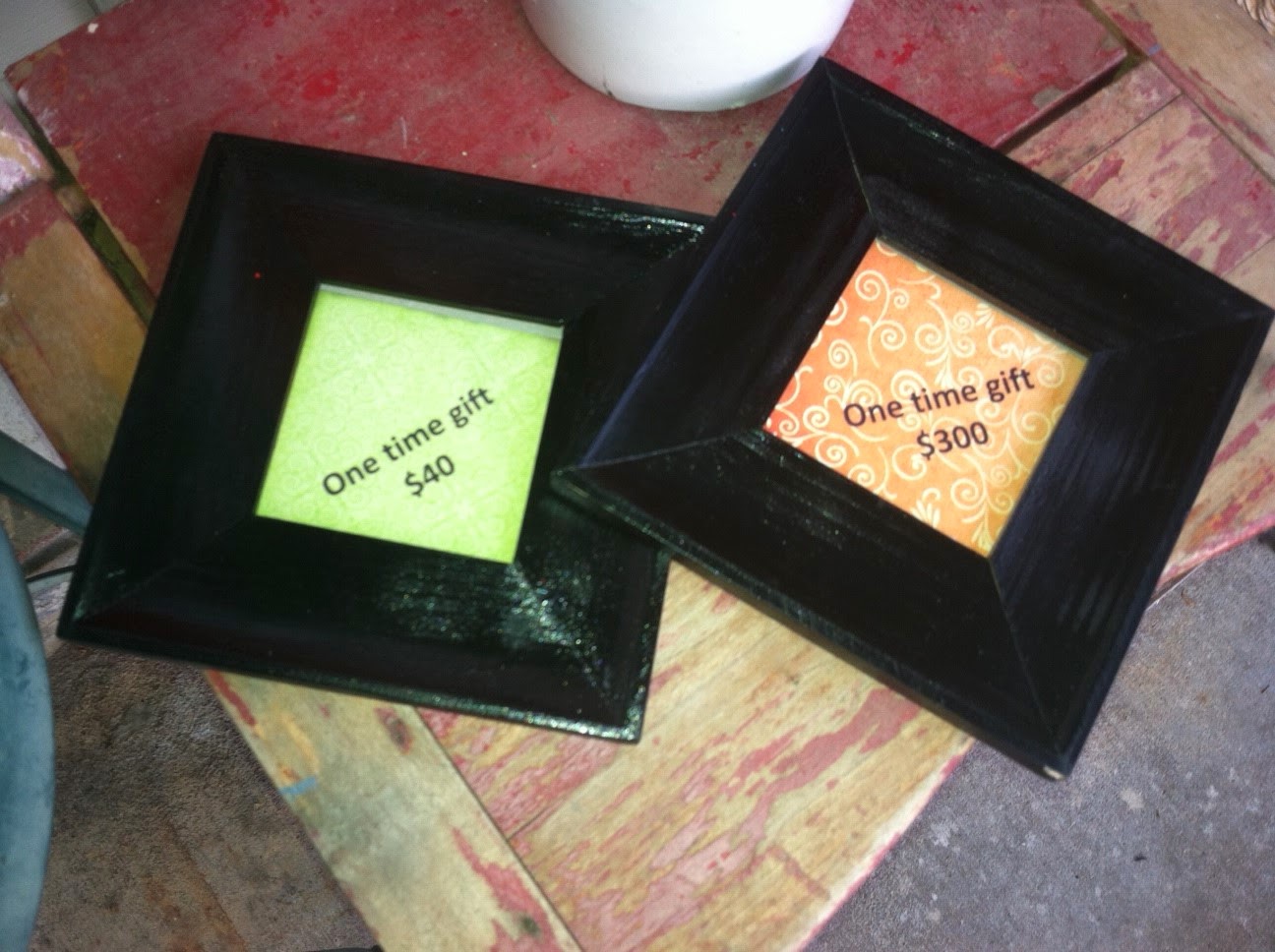 These frames aren't anything special, except for the fact that I got thirty of them for $2.00!  I've been cutting apart an old set of Children's Encyclopedia's (they are musty and worn and not in any condition to sell as a set), so I think I will put some of the cute old graphics in these frames.  The opening is only about 3" square.  I framed a picture of a frog and I might add old game piece letters that say "FROG" on it.  Maybe? 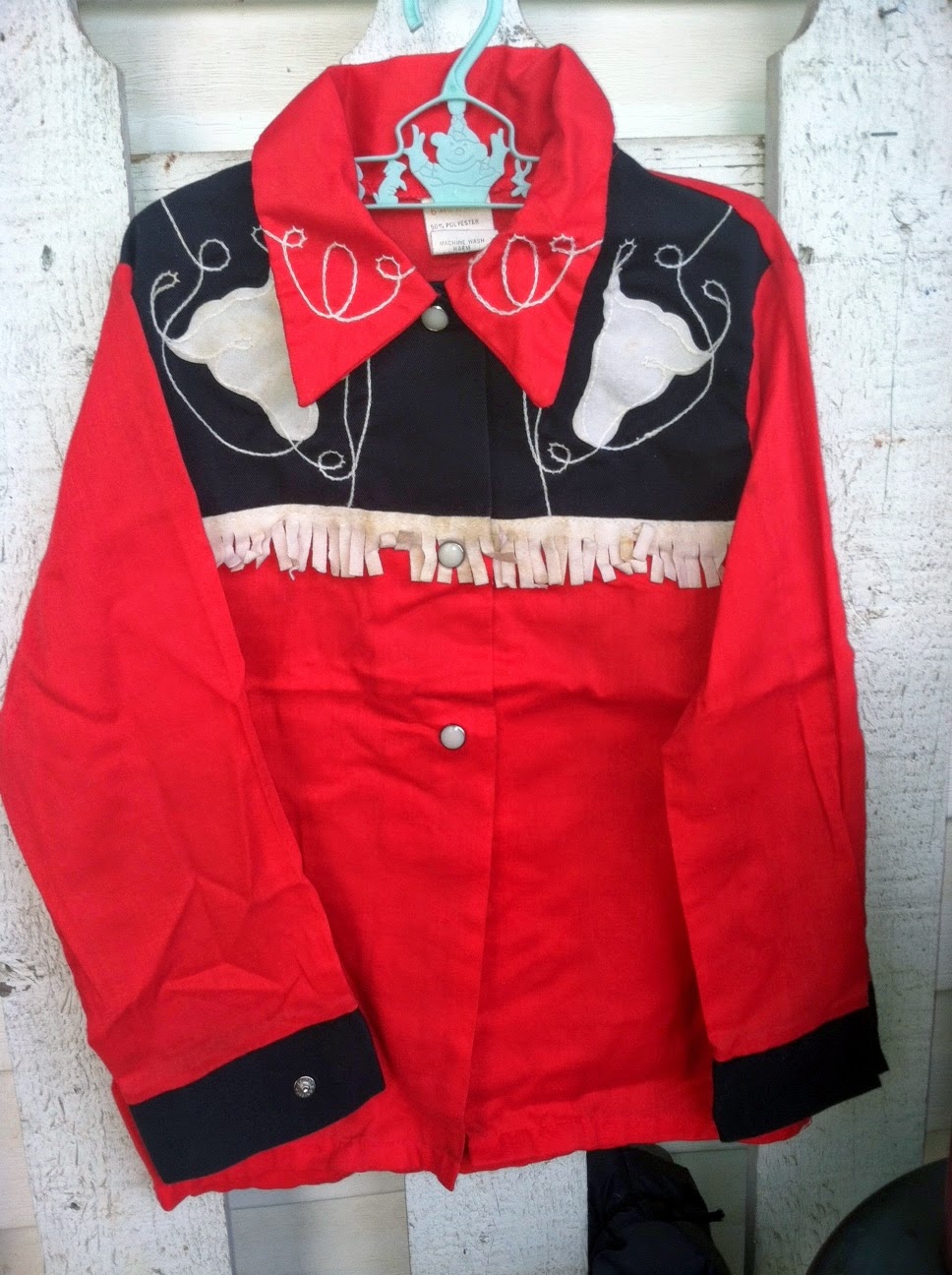 The last yard sale that I went to had nothing that interested me and I was ready to leave, but the traffic was lined up because a big bicycle race was coming through.  So, I just kept walking around and digging under things on the tables.  I spied fringe so I pulled out this adorable little boy's vintage Western shirt.  Isn't it just TOO cute?  I also bought to little boy's 1980's IZOD sweaters and two sets of Hulk Hogan PJ's from the 1980's.  (The sweaters and PJ's are in the washer, so no photos.  Sorry!)  I don't usually buy clothes, but vintage kid's clothes = awesome!

I hope the sales have started up for you too!