Where We've Been, What We've Done

Saturday we went to the local Mardi Gras parade which is usually one of my most favorite days of the year.  The town has made it difficult to park and changed the parade route over and over, so the parade has shortened each year.  It is still fun, but not the hours of fun that it was once of the hundreds of strands of beads we would catch. 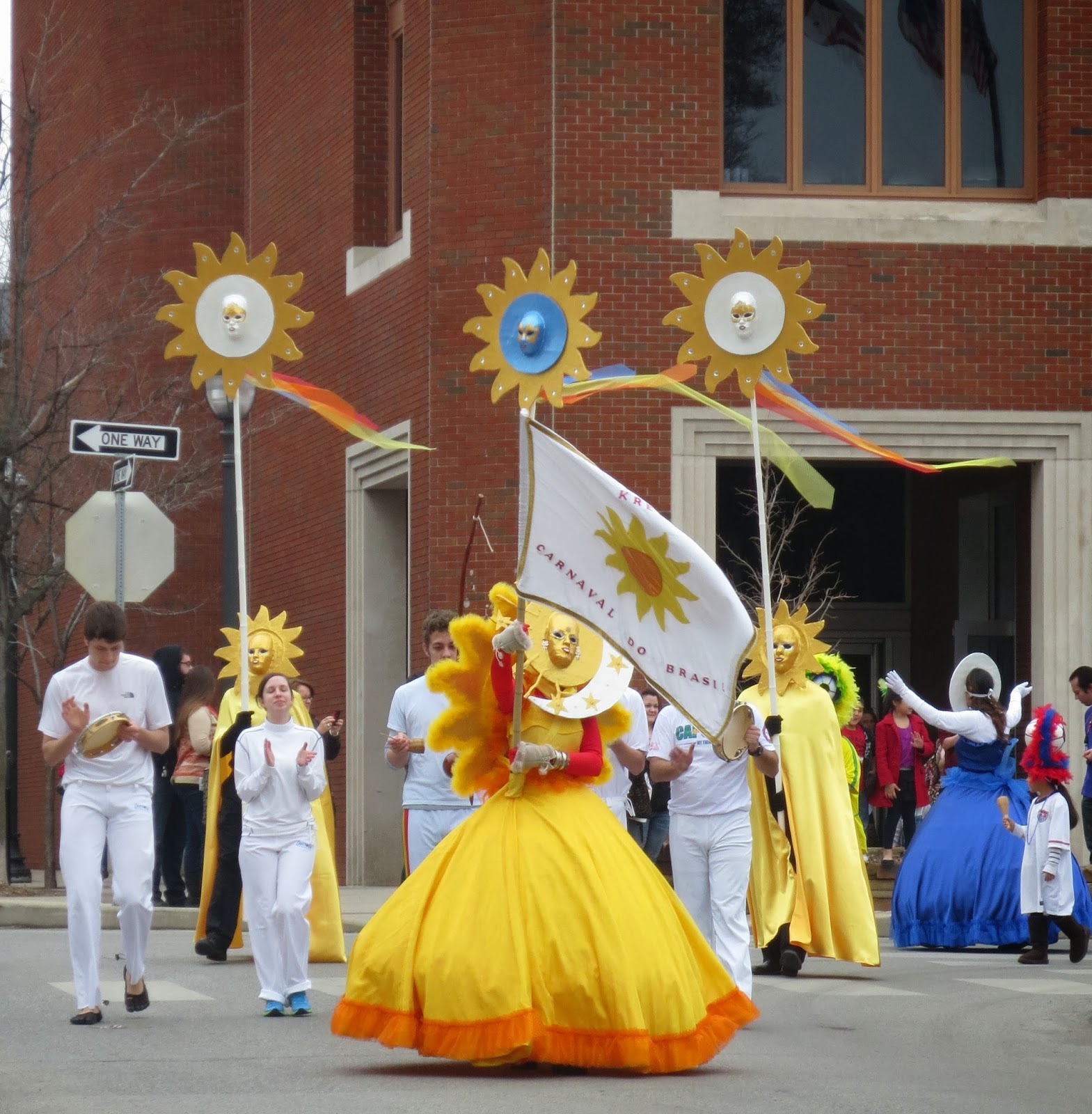 We chose to go the lesser crowded part of the route since parking was easier. We ended up being the only three people on that side of the Square. 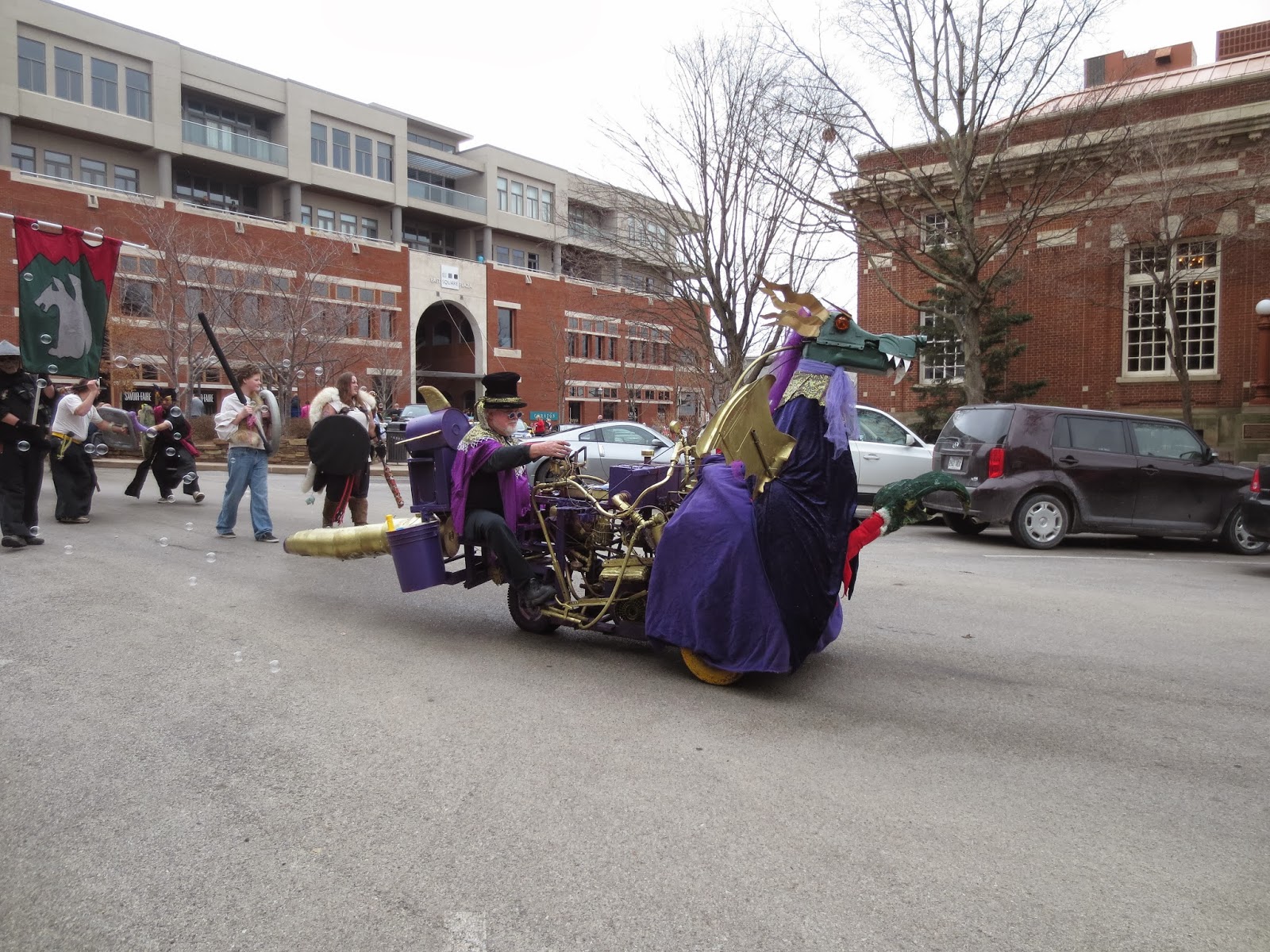 This giant dragon is always a favorite.  It spews smoke and the head turns.  I also see it in the motorcycle rally parade, so I guess it is technically a motorcyle. 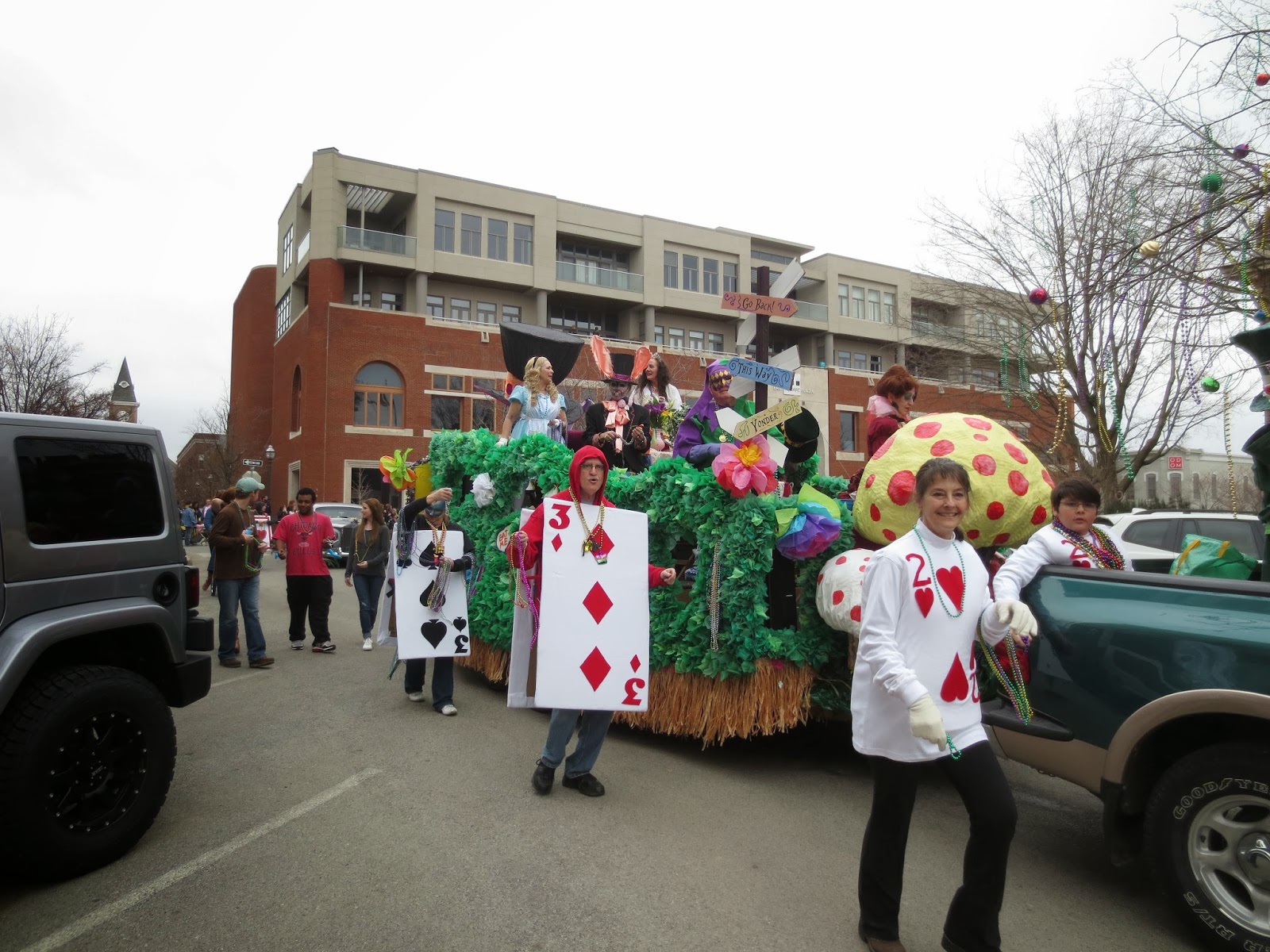 This whole Alice in Wonderland float was a great.  The Rabbit looked straight at me and said, "I'm LATE, I'm Late!" And I replied, "For a very important date!" And I was rewarded with a special long strand of purple beads. 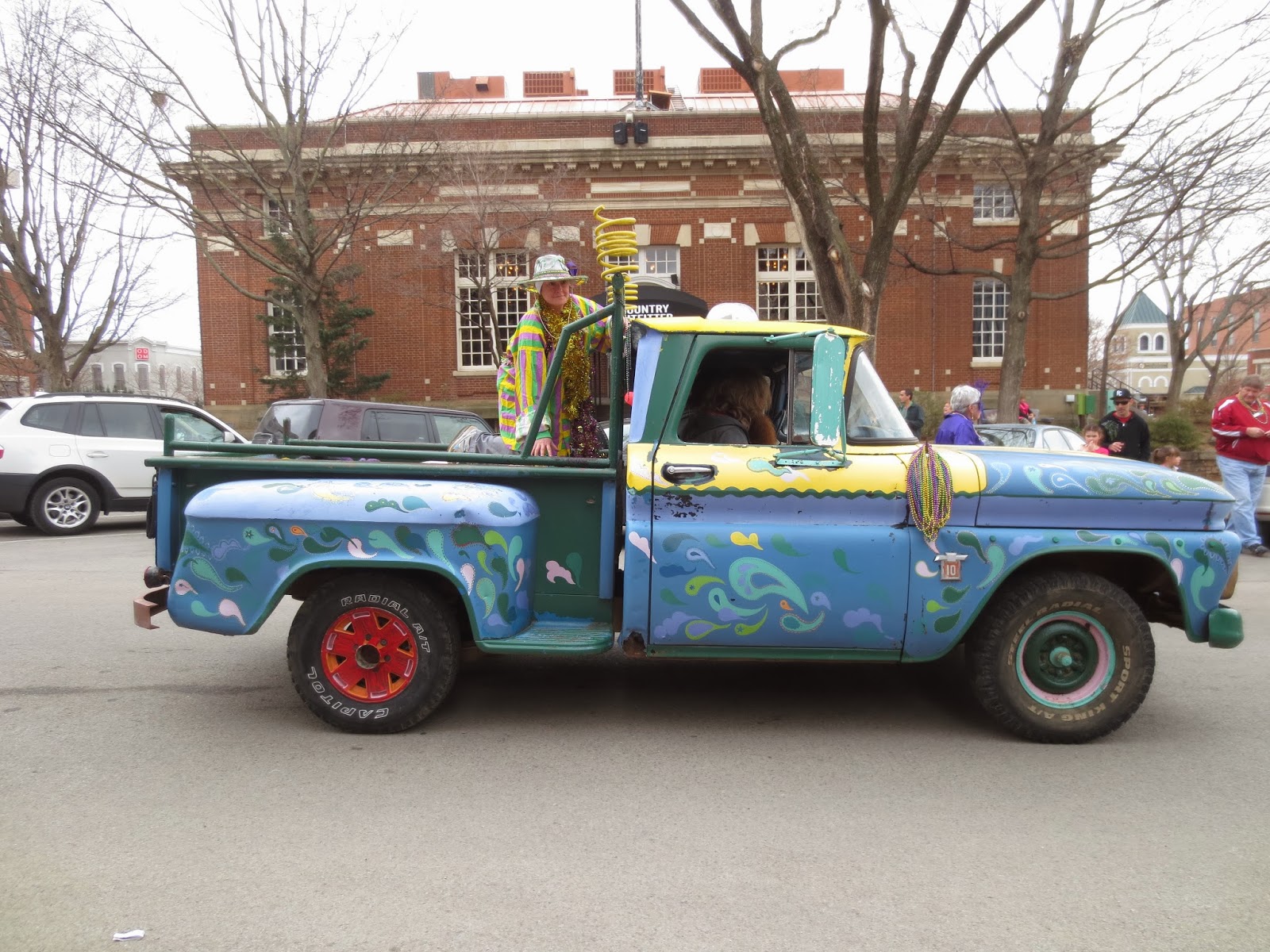 You would think that this specially painted Mardi Gras truck would only be used once a year, but you would be wrong.  I park next to it at the grocery store a lot and see it deriving all over town. 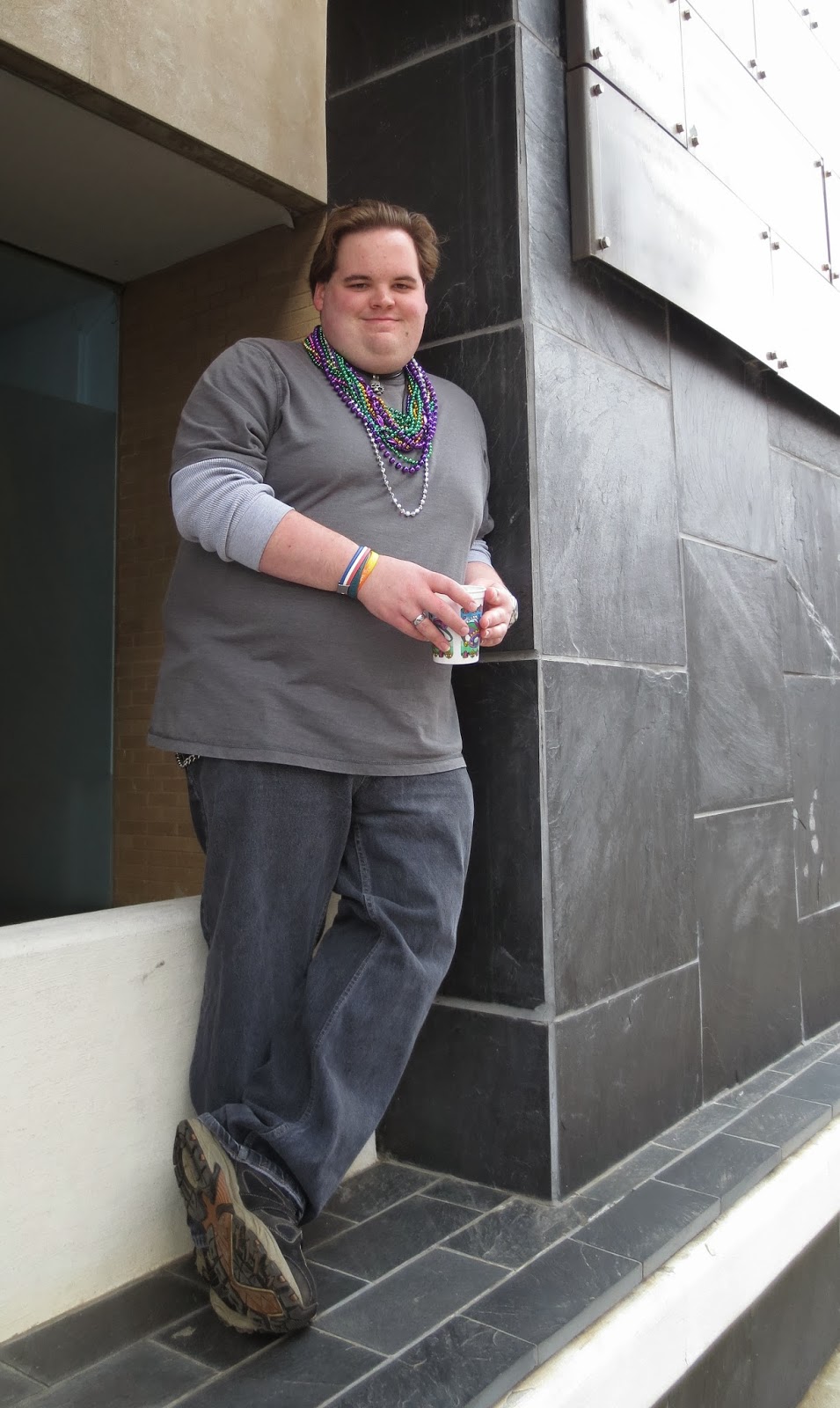 We ended up with 57 strands of beads for the short time we were there.  It was a nice warm, shirt sleeve sort of day.  In fact, we had to push our sleeves up because the sun got warm.

But, then the very NEXT day - this happened: 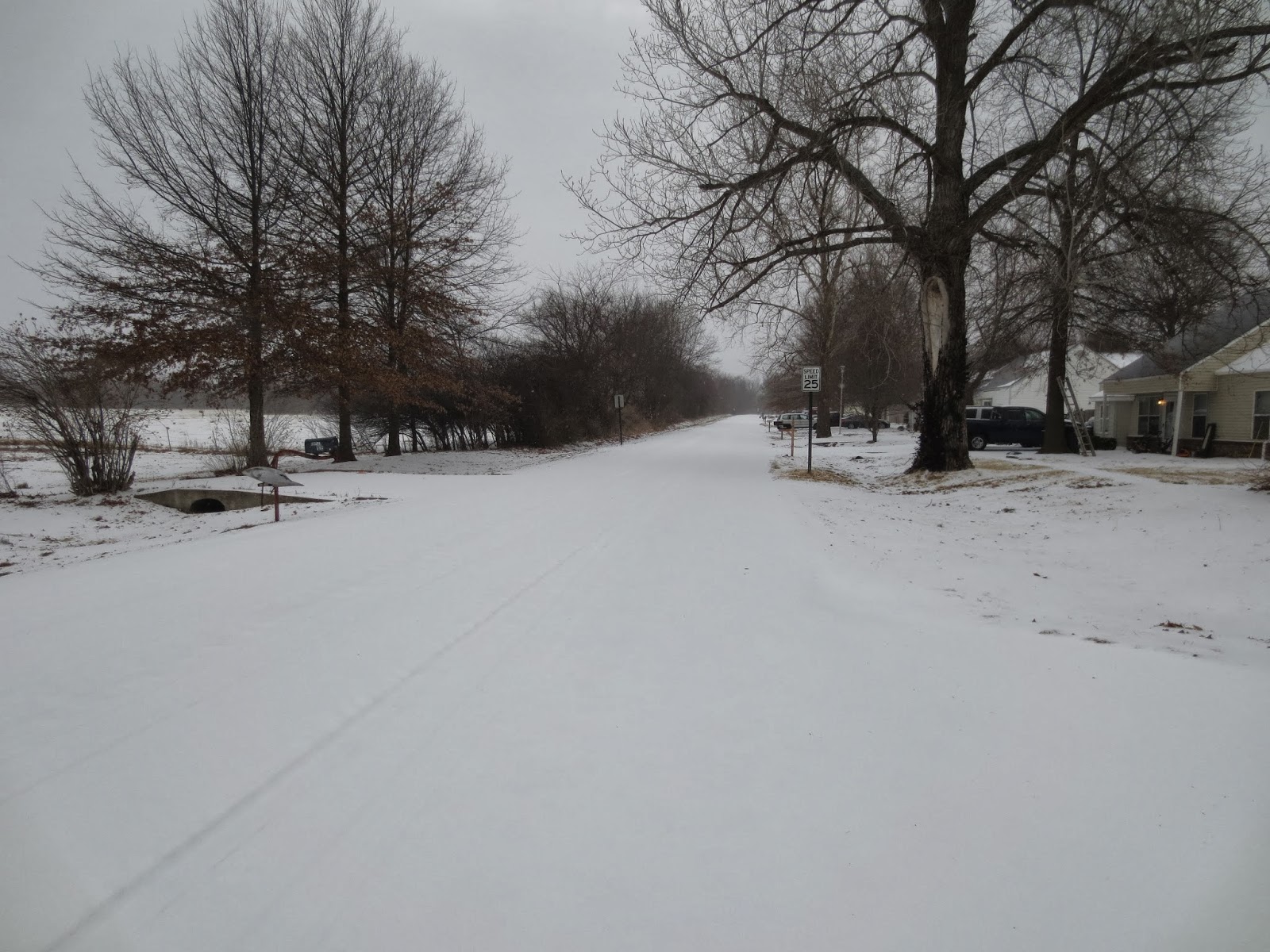 That's not ever snow - It's Sleet!  The sleet fell for almost nine straight hours. 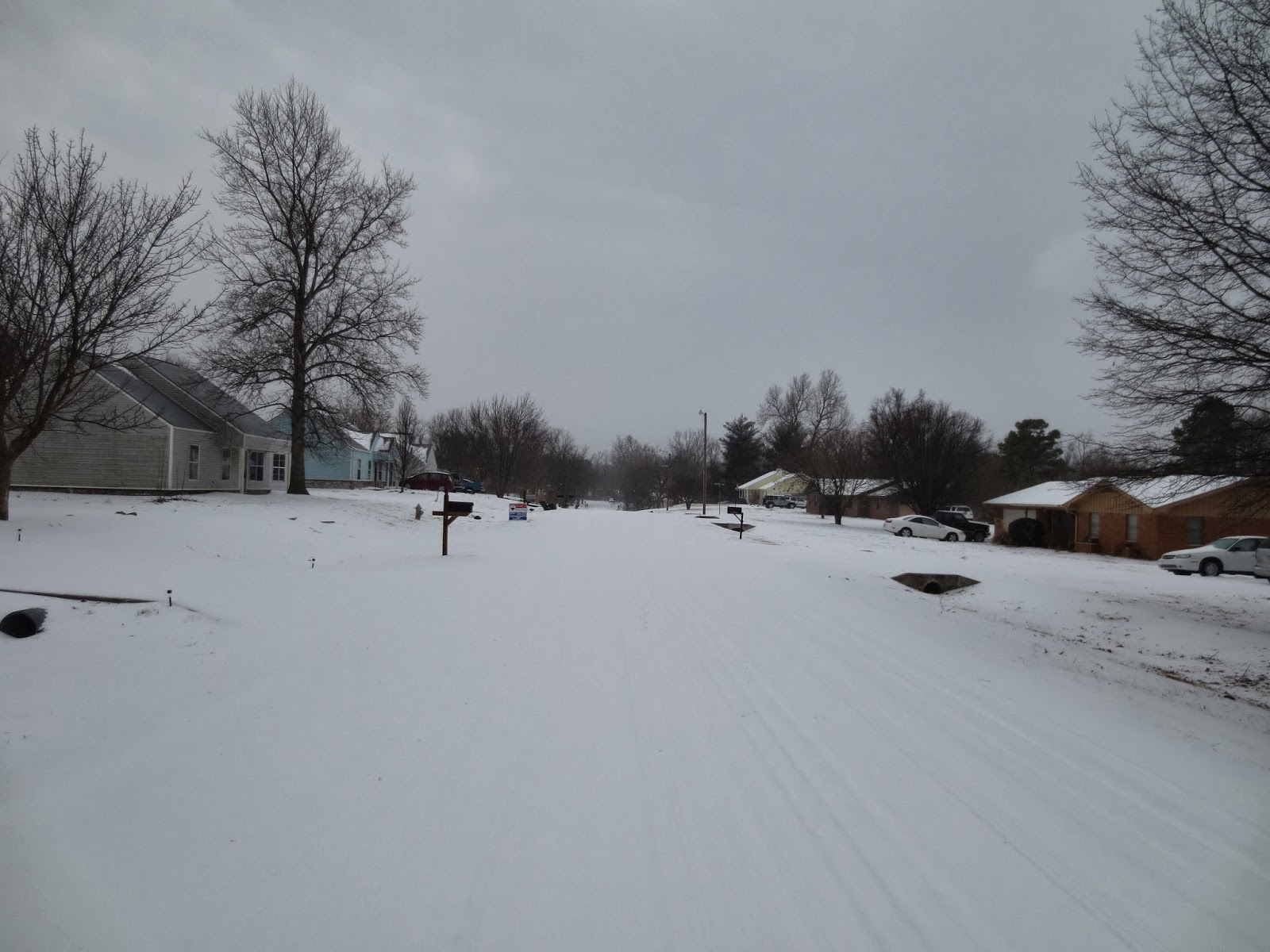 Even the few cars that came by didn't even leave tracks.  You could just walk right on top of it without leaving a scuff. 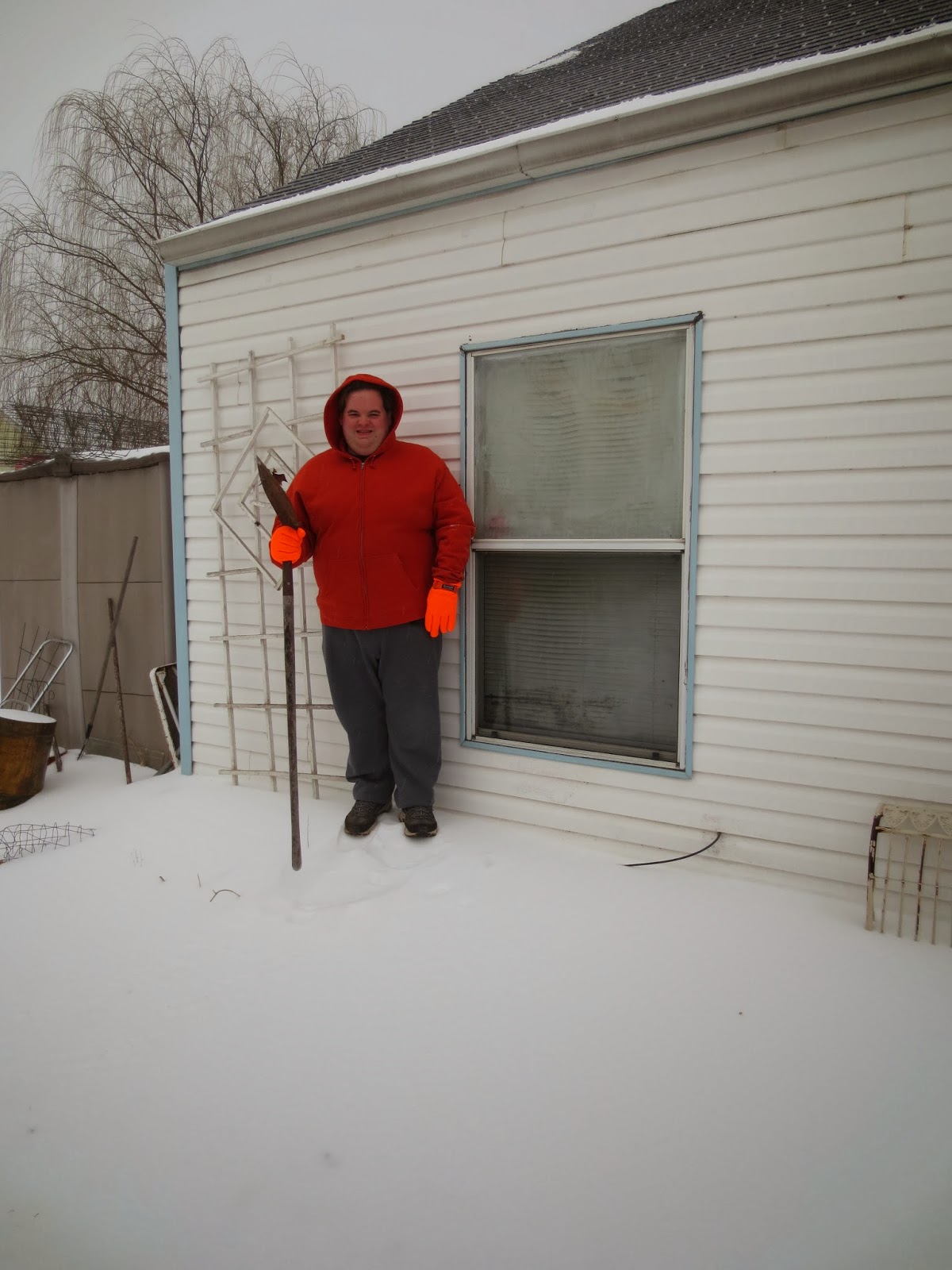 Look how tall it is from where it rolled off the roof. 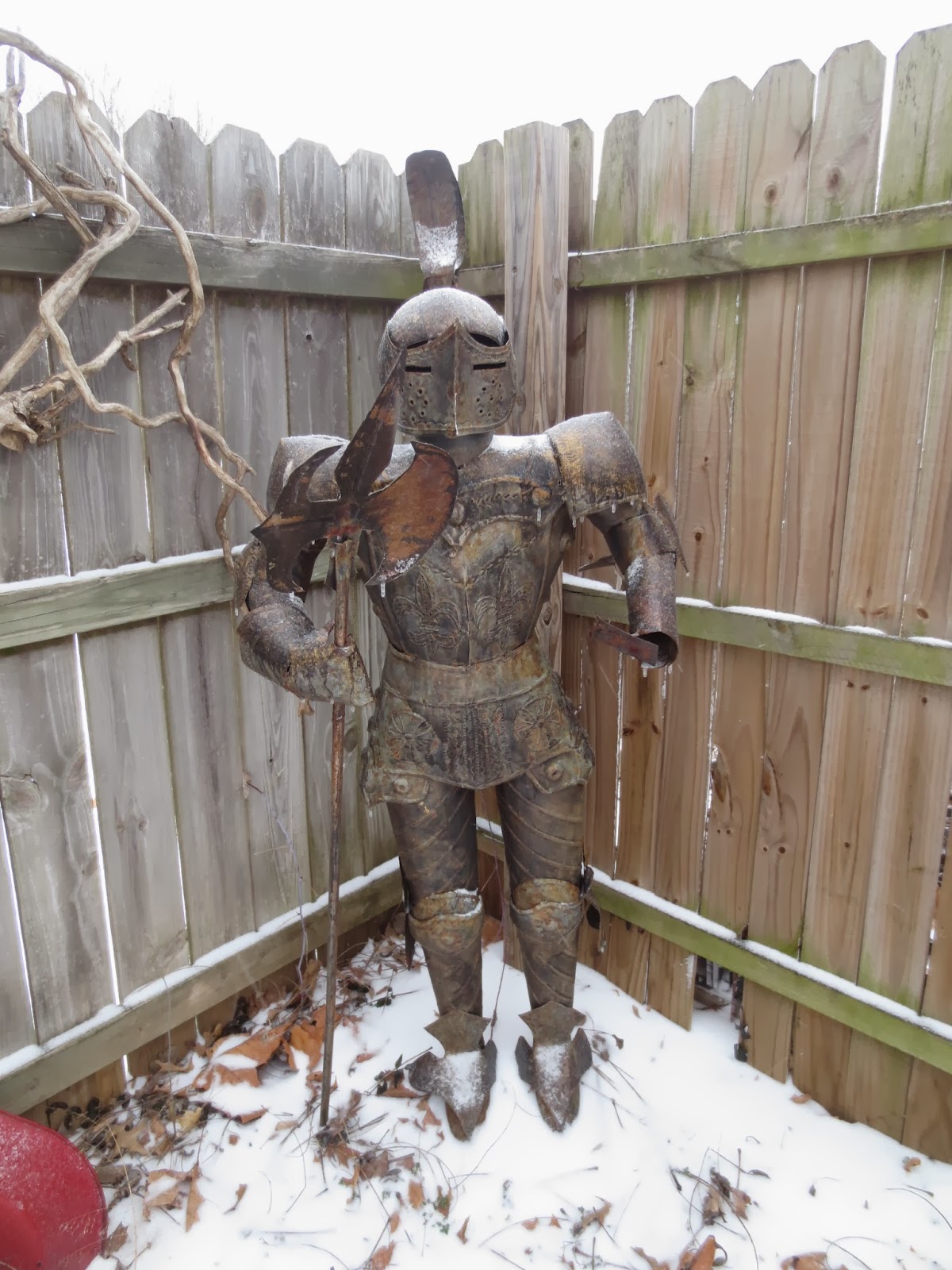 The poor tin man looks so cold out there. 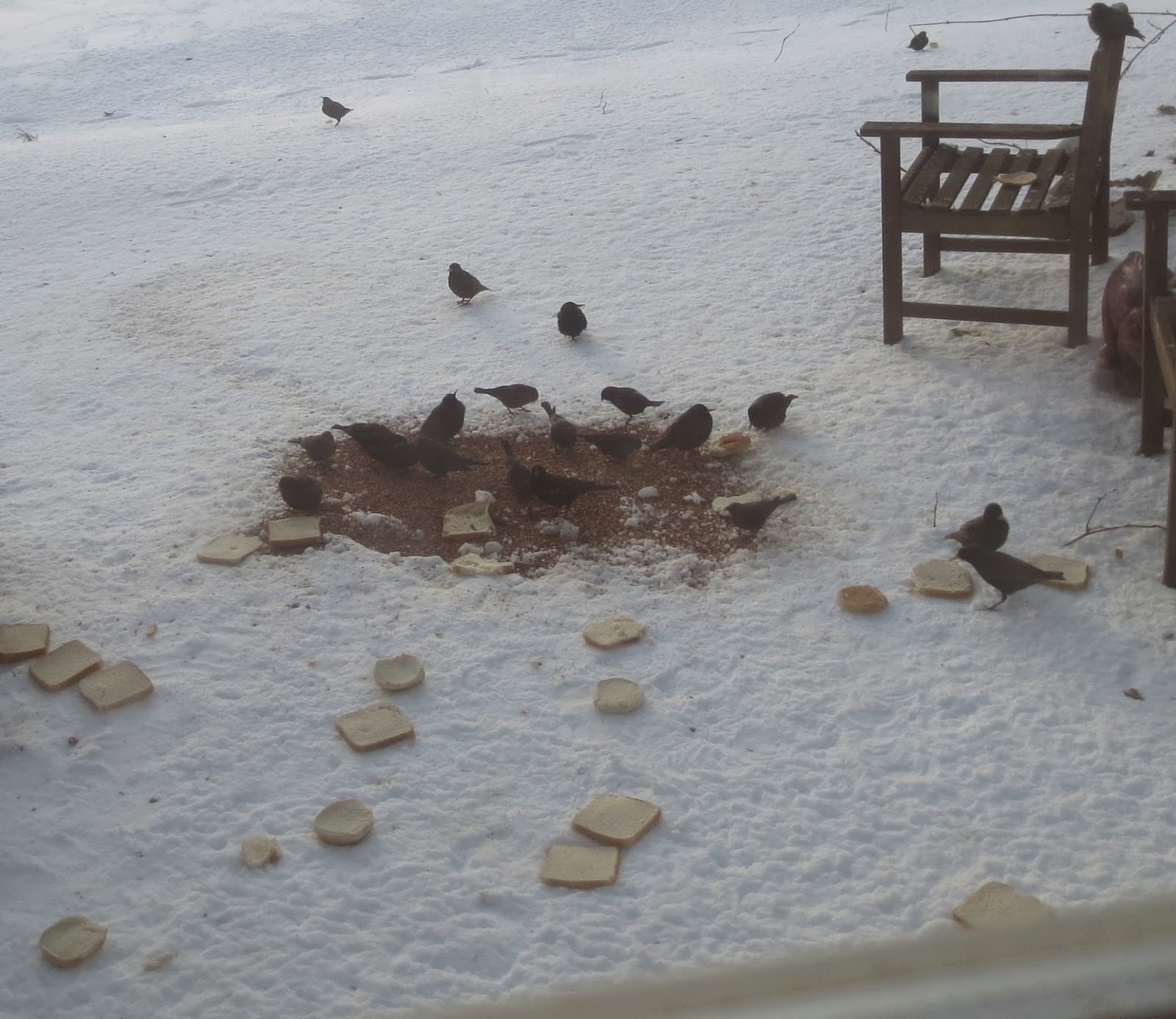 We entertained ourselves by feeding the birds once it stopped sleeting (oh, and then it snowed a couple inches on top of that).  The Breadman brings home all the stale bread that he pulls and we throw it out for the birds.  We threw out five loaves and it was gone in fifteen minutes.  I mean GONE.  We had a murder of crows out there at one point carrying off whole slices of bread.

It did all this on Sunday and today is Wednesday - the schools are still closed.  My street still looks like it did in those photos.  Schools have missed 13-15 days this year due to snow and they didn't miss a single day the past two years.  Such a crazy Winter.  So much wet stuff that even I, the lady that loves Winter and snow, is about DONE.  I need a little sunshine and a few yard sales and maybe one good digger sale.  I signed up to sale at a big Street Fair in May, so I am thinking of Spring and summer things, but it is H-A-R-D!  Ideas are welcome!
Posted by Shara at 12:11 PM