Barn Sale Set Up and The Weekend in Junk

Today we set up my canopy for the Barn Sale.  I have had a nervous feeling in the pit of my stomach because we hadn't even put the top on it yet, let alone figured out how to assemble it.  So, getting it all set up with the sidewalls and leg weights really made me feel good.  Now instead of dread, I'm excited! 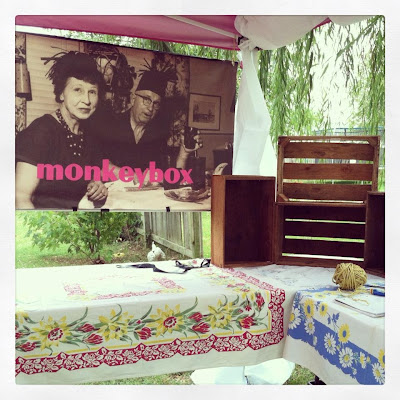 The very first thing I ordered when I decided to do this sale was that banner.  Heck, I didn't even have a canopy, but I had a banner!  I love it.  It's 4' x 2.5' so it's quite big.  We attached it to the top rungs of the canopy with rope.  I had found a set of nice curtain rods at Goodwill that I attached to the top and bottom through the grommets.  The weight of the bottom drapery rod keeps the banner weighted so I didn't have to tie down the bottom.  The finials on the rods are hot pink crystal globes which make the banner really *pop.  I've been looking at a lot of posts on Pinterest about selling at craft fairs and swap meets.  The one idea that stuck in my head and made the most sense, was to elevate the tables up on plastic bed risers.  Genius!  It brings the table up to counter top height and it makes it so much easier to display, shop and package.  I got three sets of bed risers in the dorm department at Walmart for $5.88 a set.  Well worth it.

I decided to pull out my prettiest and brightest floral tablecloths to cover up the ugly tables.  I'm using crates and some small shelves to add height to the tables.  I have a lot of neat old displays and things that I am going to add, but I am really just getting started setting it all up.  It's in the side yard so I can access it and work on different set ups.

The neighbor kids have been over to ask
1) When is the garage sale
2) Did we camp in the tent last night
3) Can we play in the pink house? 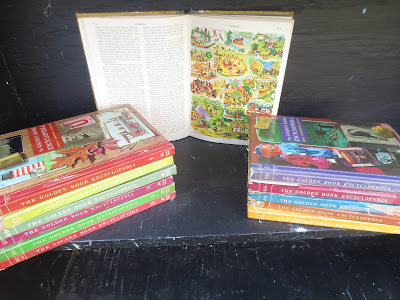 I found two sales and stopped at the Super Cheap Thrift.
I got this set of Golden Encyclopedias at the first sale I stopped at - all for $3.00. 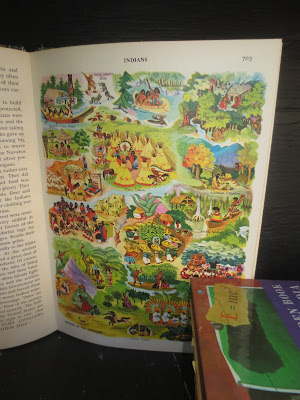 I don't know if I will sell them as a set or framed some of the images.
Probably try to sell the set first. 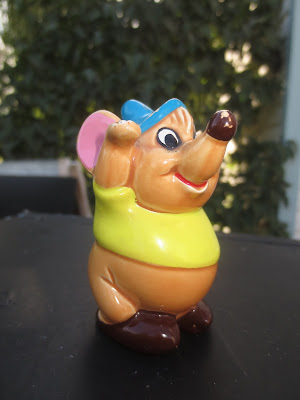 Okay, so don't hate me but I have a confession.
I hate Disney stuff.
But this fat little Cinderella Mouse cracked me up.
Mostly because he reminded me of this little girl on America's Funnies Videos the other night.
Mostly because of her hand pointing. 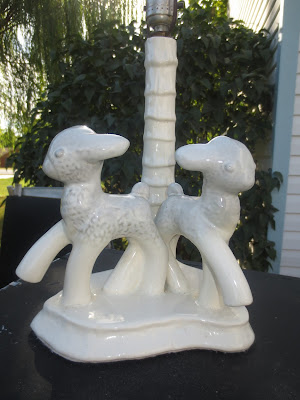 This pottery lamb lamp was so cute.  I loved it.  I even found a shade for it at the thrift.  But, when I got it home, the bulb shorted out when I plugged it in, so I just cut off the cord.  I need to get a new lamp kit for it, but I have never done that before.  (I have installed new lights, a hood vent and ceiling fans, so I think I can do it.)  It's just darn cute. 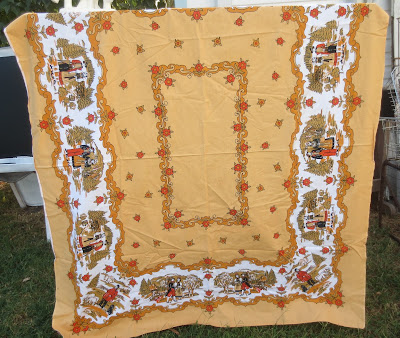 I got this tablecloth at the thrift.  I was excited - my first Thanksgiving tablecloth. 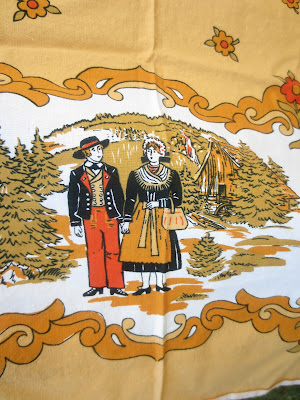 It wasn't until I looked at these photos did I realize that, uh, hello, those aren't Pilgrims. 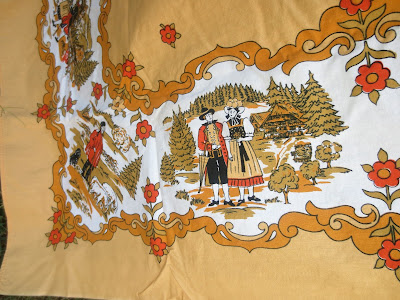 It was made in West Germany, so I still like it.  But, I really thought it was a Thanksgiving tablecloth. 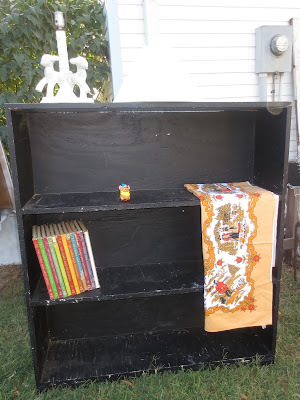 I also got this giant set of shelves at the first sale.  The Breadman was at the Razorback game, so when he got home as his punishment I made him he helped me go pick them up.  They weigh a ton!  Normally I wouldn't be feeling the black, but I kind of like it on these shelves.  I painted the sides with Chalkboard Paint so I can write the Booth # or specials on the sides.  They will go to the booth eventually to replace those cubbies that I have in there right now.  Oh, did I mention they cost TWO DOLLARS?

Probably won'' be much junkin' going on for me in the nest few weeks what with preparations for the Barn Sale, the big motorcycle rally this week and the actual Barn Sale itself.  But, I bet I manage to eek in a littel bit.  It's kind of an illness.
Posted by Shara at 11:58 PM