I was pretty busy during the Barn Sale so I never really got a good look around at any of the booths except the four in my immediate line of vision.  Going into Lara's booth was fun because I recognized many of her items from her blog.  It was kind of like seeing pictures online of a museum and then going there and seeing them in person.

On the first day during set up, the event organizer, Amy stopped by my booth and handed me a couple items she had found along her junking route that she thought I might like.  How nice is that?

A vintage Easter chick candy container and a Chocolate Covered Cherry box!
I love them both - I haven't added a Cherry box to my collection in a long time.

To the left of my booth was Laurie.  Her booth is Junque Rethunk.  She spotted a packet of letter cards in my stash that said JUNQUE, so she bought them from me for $2.00.  A few minutes later I was nosing around in her booth and spotted a couple boxes of school chalk for $1.00 a box.  So, I handed her $2.00 back and we were even. 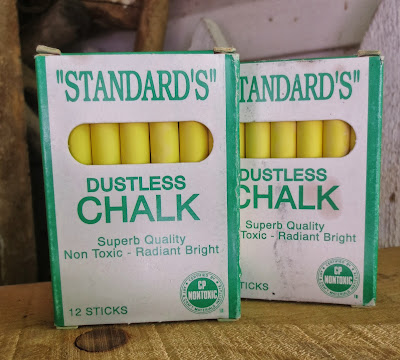 It makes the best *clink* when it rattles in the box.

Her son was loving on some old Transformer McDonald toys that I had, so I gave him one of each.  And, even though she didn't have to - she gave me a green gingham chicken scratch apron for my collection. 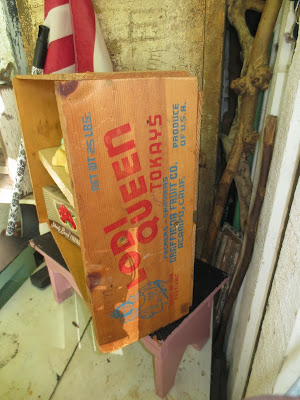 On the last load of the wet cold rainy trip, Laurie also gave me this great old crate that she had made into a shelf.  She saw that I used old crates in my booth so she thought I might like it.  Plus, her truck was SO FULL that she wasn't entirely sure that she could even get her son in the truck to go home.  But, she was right, I do love it!  See that word QUEEN?  Awesome! 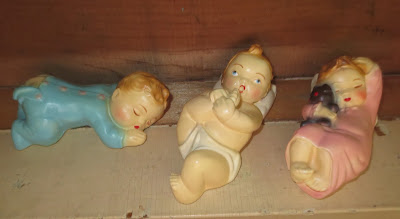 Lara had put these chalkware babies on her blog quite some time ago and I was smitten with them at first site.  Every time she shows an updated photo of her booth, I play eye spy until I spot those babies.  So, here we are at the Barn Sale and what appears in a wee little school chair thisclose to my booth but those babies!  Ack.  And they sat there all day Friday and all day Saturday.  And as we started to pack up  I knew I had to buy those babies.  But, Lara being the super sweet person she is, thrust them into my hands.  They are just seriously adorable.

Okay, I swear this love fest between me and Lara is coming to an end - she raves about me and makes me blush, I rave about her and make her blush.  And I am sure all of YOU guys are sick of us.  But, before I stop gushing, I have one more thing to show you.  And, it's a killer.

On the sidebar over there --------> I have my Thrifting Wishlist.  That is a list of my DREAM items I want to find.  Not even that I need any of them.  I just want to FIND them and OWN them for a minute.  One of those items is a child sized grocery cart.  Not a toy one.  Not a plastic one.  Not a cutesy one.  But an actual metal grocery cart from a grocery store meant for a child to use.  A couple weeks ago, Lara emailed me that she had found a child sized grocery store.  At one of my thrifts!  For $5.00!  Good golly!

She used it as a display for the sale and it was completely adorable.  After the sale - she GAVE IT TO ME!!!! 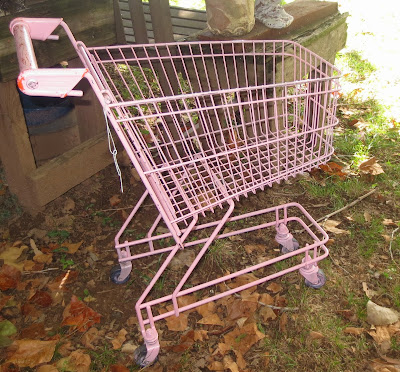 Can you believe that it is even PINK?  Someone must have painted it.  You can see the orange handle peeking out underneath the pink.  Good golly, it is cute. Now, do I need at child sized grocery store at my ripe old age?  Uh, no.  Do I FREAKING ADORE it?  Uh, yes.  I have a million ideas for it, but haven't settled on one yet.   I gave her that basket of old baseballs I had in my booth and a big tub of Tinker Toys for her babies.  But, I KNOW I got the best end of this deal!  Thank you so much Lara!

So, that is the story of the Barn Sale, start to finish and how I brought home a bunch of treasures without spending a dime.  End of story!  Thanks everyone!
Posted by Shara at 11:24 PM