You Can Find the Best Things at Thrift Stores

Today when we were having lunch, I said, "I'm going to ask to go somewhere I haven't asked to go to all year."  Then I named off a certain thrift in town.  It used to be one of my very favorites, but they had to move to a new location after the hospital they were tied to closed down.  Over the past several years, I had became friends with a lady named Evelyn  that worked there.  As soon as she saw me come in she would have things to ask me values on or would the boy mind moving a couch or something.  I put a lot of things on Craigslist for her including one item that sold for $2,000.00!  We mostly went to see her and to see if she needed anything. I nearly always found a little something which, more often than not, she either pushed to me across the counter or charged me a fraction of what it was priced.  She was a very nice lady - she was a house Mother at the University for a Sorority, a former Ms. Senior Arkansas that can still do a high kick in her 70's and just an overall nice, nice lady.  (In fact, she used to be in the opening to Antiques Roadshow doing that famous high kick of hers!)

Well, when the thrift had to move to a new location, she tried to find places.  She was over the whole Auxiliary and the decisions were hers to me made.  But, as she would find a new location, the other volunteers would give her grief about it and start causing problems.  I hated that for her.  You would think that when you are volunteering and in your 70's and 80's you would have all learned to get along and there wouldn't be "office politics".  But there were.  Lots of it.  She finally go so fed up, that she resigned her post.  I went to see her on her last day there which was the last day that the thrift was going to be in the prior location.  I had been going there since I was in college, so I was a bit nostalgic.  I gave her a big hug and told her that I would really miss her smiling face.

After they moved to the new location, I went one day just to see it.  I wasn't happy with the overall atmosphere, the parking, the new pricing structure or the women working.  So, I know I wouldn't be going back much at all.  The Bean and I stopped one day so he could see the new location and we agreed that it wasn't a place we cared to go to anymore.  And I hadn't been back since.

So, at lunch, for some reason, the idea popped into my head that I wanted to go there.  Third time is the charm which either meant that today was the day that something good would be there or I would make the final decision to not ever go again.  When we got there and walked in the door, a voice said, "THERE YOU ARE!"  I was my Evelyn!  It's one thing when you are happy to see someone, but when they are just as happy to see you, well, that's just a really nice feeling.

She had decided to come back just as a volunteer to work one day a week because she missed everyone.  She came around the corner and gave me a big bear hug.  She rubbed on The Bean's arm and patted The Breadman's arm.  "It's just so good to see you all!" she kept saying.  Now, how often do you get that kind of reception at the thrift store?

In usual Evelyn custom, my total for my finds today was less than they should have been.  I don't just love her because of this, I promise.  :) 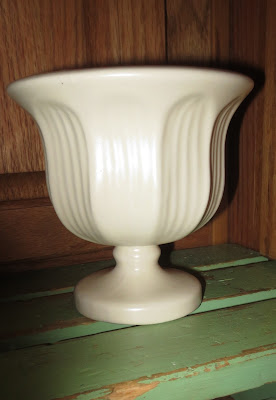 A matte white pottery vase.  Which I didn't need.  But, I hardly ever find them anymore.  So, I bought it. 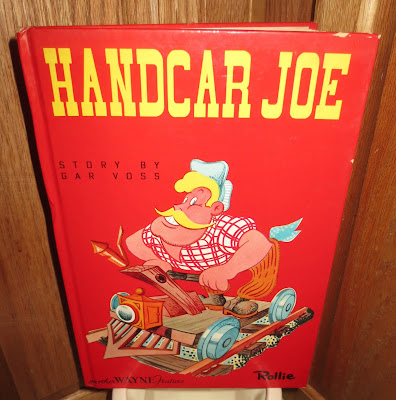 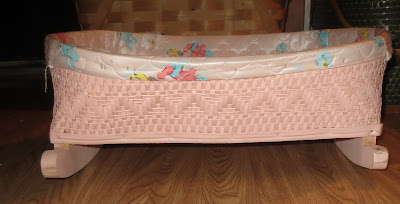 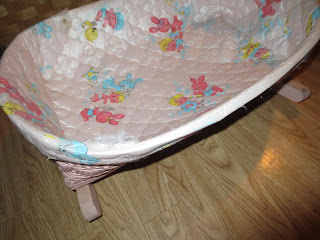 With the cutest lining. 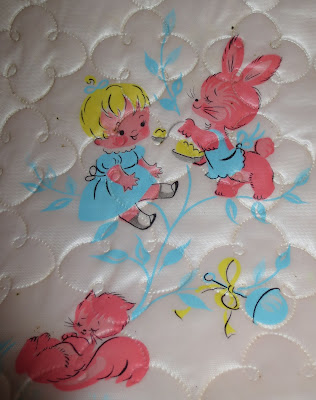 Bunnies taking care of babies.  Is that not adorable? 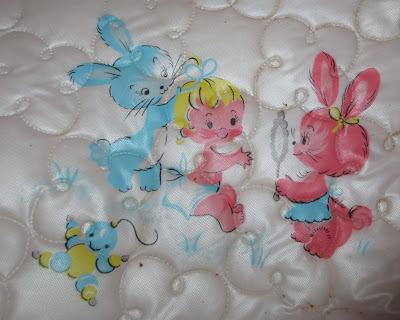 Love that old baby toy on the bottom. 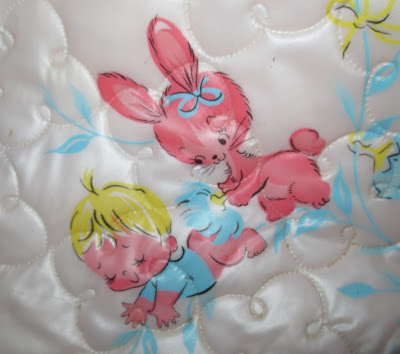 Are you seeing this?  That bunny is powdering that babies naked bum! 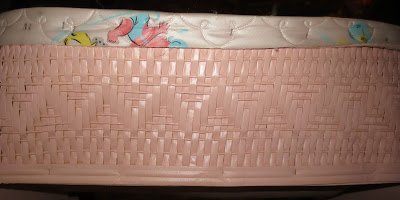 It matches my Hawkeye and Redmon Baskets.  Very cute.

Evelyn came up with a price of $4.50 for all three items.  After she rang it up and tried to get my 50¢ change, the register said she owed me $4,505.00 in change. When I said that would mess up the sales for the day, she just laughed and said, "Oh well, it's not my problem anymore!'  There is something to say for not being in charge anymore.

So, it looks like I have one more thrift store to put back in the loop and a friend back in my life.  You can never have too many of either!
Posted by Shara at 11:45 PM