Monday was the first day of school in the area.  Since we home school and don't start until after Labor Day, we have a tradition of going somewhere and doing something fun while all the other "suckers" go to school. We couldn't think of anything really different to do, so we decided to visit a new HUGE Goodwill about 25 miles away.  It is in a really swanky part of town and there is LOTS of money and big houses and people with money in the area.  So, I was hoping to score a ton of good stuff.  but, you know what?  Rich folks donated the same crap as regular folks.  This store had a huge clothing area, and I suspect that thee were deals to be found,  But, I don't ever look at the clothes.   I searched that store top to bottom, looked on every single shelf, dug under things and in bins and in the end I only found ONE thing to buy. 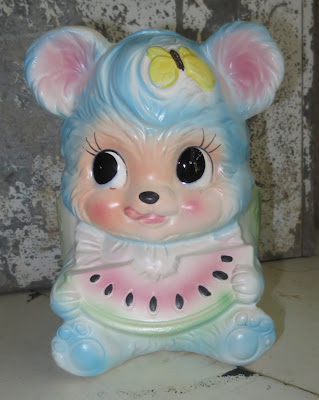 I learned a long time ago that these vintage planters really never sell, so I never buy them.  But there is a strange thing with these big eyed ones in Japan.  A few have sold for hundreds of dollars on ebay.  I'm not saying that this is one of them, (but I wish it would be!) but it does have BIG EYES, so maybe....

After we left that thrift, we drove through the historical part of town and then stopped at a thrift that I really like, but since is is about 30 miles from me, I rarely get there.  They always have a good selection of items and they have good prices.  It's kind of hidden away on a side street so the locals know about it, but it's not a place that just anyone would drive by and stop.  Since my last visit, they had rearranged, opened a new room and the prices had gone up a bit.  But, overall, it's still a great thrift store.  Having said, that, I only found two things this time.  Well, that's not entirely true.  I found a vintage counter top candy bar rack where they had five rolls of 25¢ Walmart Christmas ribbon displayed.  It didn't have a price tag on it, but it also did not have a NFS tag on it.  I looked at it about a million times and tried to get the attention of some of the "helpers" as they call them, but no one ever noticed me.  Finally I took a photo of it and asked the lady at the check out if if was for sale.  "Oh, well, I don't think so - we are using it to hold RIBBON."  I would have paid more for that rack than they will make stuffing it full of ribbon.  Oh well.  I will remember it fondly.  *Sniff*

Okay, so where was I?

Oh yes, remember when I said I never buy baby planters?  Remember?  All the way back up there^? 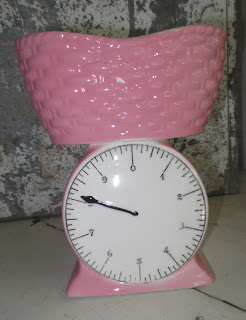 Yea, well, I bought one there too.  Not one in years and then two in one day.  But, golly, this one is PINK and it has a vintage scale on it and a BASKET.  A PINK BASKET.  Seriously!  And, it was only 75¢.  You can't go wrong with anything that has all that going for it! 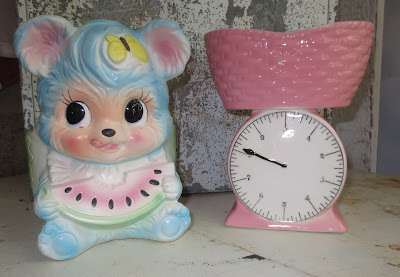 They are both really sweet and a bit different that the usual baby planter I see.  Besides, I had a really bad case of Empty Hand Syndrome and had to find something to buy.

The only other thing I found made me so very happy.  A lovely vintage tablecloth.  Still my number one mostest favoritest thing to find when I am thrifting. 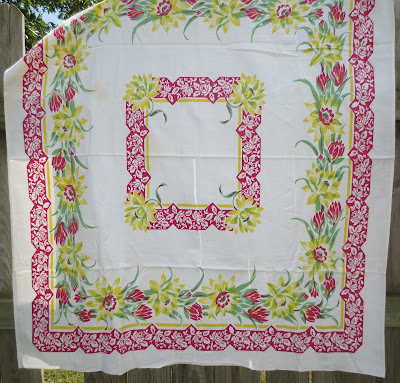 This particular one is gorgeous. 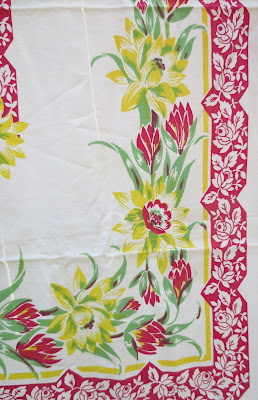 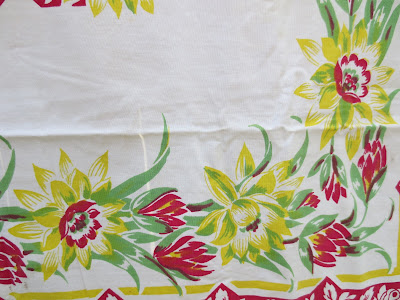 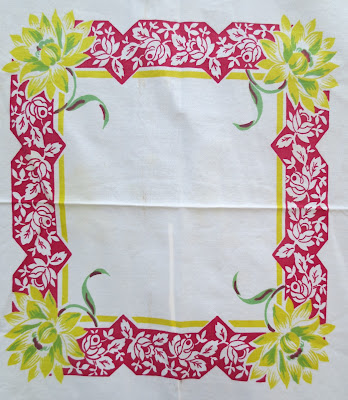 (Not you guys, those kids in school already)